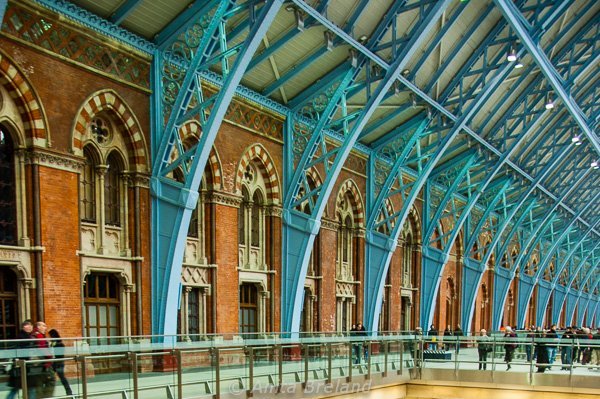 St. Pancras, in all its Victorian splendor, was saved from demolition in the 1960s, thanks to the tireless efforts of poet and ardent preservationist Sir John Betjeman. Since its dramatic update in 2007, St. Pancras International railway station has flashed its Victorian engineering credentials while sporting some a couple of pieces of dramatic statuary. When I traveled through the London station, I was intrigued at the large bronzes–clearly of recent vintage–I found there.

John Betjeman, a founding member of the Victorian Society, is considered instrumental in helping to save the famous Victorian façade of the St Pancras railway station. His contribution was commemorated with a larger-than-life statue installed at the time of re-opening St. Pancras in 2007.

The statue depicts him walking into St. Pancras station for the first time. Betjeman is looking up at the great arc of the train shed, leaning back and holding onto his hat. Coat tails billow out behind him, catching the wind from a passing train. A Billingsgate fish basket containing books is in his right hand. He looks to be in awe of what he sees.

Like many others, I strolled around the statue, scanning the poetry underfoot. A description of the statue’s apt representation of the man it honored was published in The Guardian’s Art & Design blog at the time of its installation. The Meeting Place, a 20-ton bronze sculpture at St Pancras International, stands directly beneath the station clock at the southern end of the Eurostar terminus.

The 30-foot statue of a couple in a poignant meeting, is by artist Paul Day. The work aims to reflect the romantic nature of train travel, as well as a symbolic meeting of two cultures.

The lovers clinch beneath the imposing iron archways constructed by engineer William Barlow in 1868.

Considered by some to be fine art, decried by others as kitch, The Meeting Place stands in the midst of all the action en route to train platforms.

S.t Pancras is Eurostar’s London terminal, handling more than 50 million passengers per year. Paris is just only 2 hours 15 minutes away, and Brussels 1 hour 51 minutes. After its rescue from demolition, the station re-opened as an international and domestic terminus in 2007.

What is your favorite station in London?