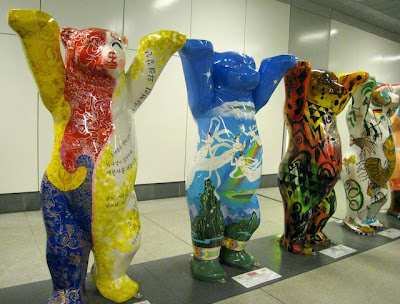 Berlin is bear-intensive. Think Berlin’s coat of arms, or Knut, the Berlin Zoo’s polar baby sensation who charmed the world in 2006. For four months, until April 14th, 2010, another kind of bear is in town. United Buddy Bears, a smile-inducing circle of painted bear sculptures, is on display in the Berlin Hauptbahnhof, in a four-month stop on exhibition’s world tour.

The Buddy Bears stand together hand in hand in their circle, with the intention to promote tolerance and understanding among nations, cultures and religions. The two-meter high figures were painted by artists from all countries recognized by the United Nations. In this friendly circle, the United Kingdom and the United States stand side by side, as do the bears of North and South Korea.

When I visited the bear exhibition, school children were running between the sculptures, rubbing colorfully painted tummies and picking favorites. It was cold in the underground exhibition space, so all the charging about was probably a good idea.

The sculptures, which are auctioned off in support of UNICEF and other charities helping children, got their start as a local charity initiative in Berlin almost ten years ago.  They were the brainchild of Berliner Eva Herlitz, who staged the first bear exhibition in front of the city’s KaDaWe department store, after being inspired by the painted cows she had spotted in the streets of New York.

To see the bears before they decamp for Kazakhstan, head for the Dudlerpassage on the U-Bahn level of the station. You’ll join over 20 million people who’ve already paid their respects on several continents. 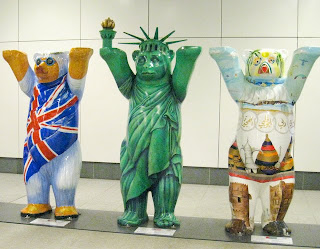 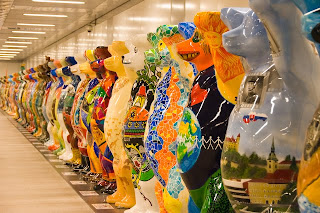 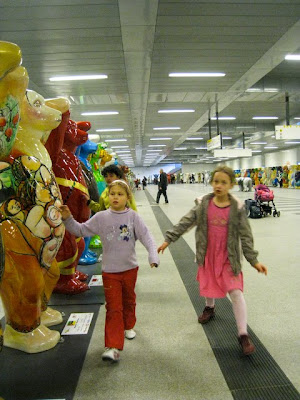 Berlin’s Hauptbahnhof in black and white