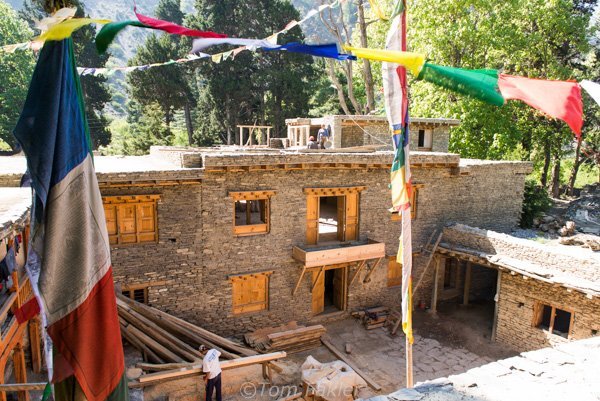 The Chhairo Gompa complex is a Buddhist center of learning in Nepal’s Lower Mustang Valley. Located south of Marpha on the Kali Gandaki River, the remote site is tucked away in a grove of spruce trees, about a kilometer east of the famed Annapurna circuit trekking trail. Two months ago, I joined a group of volunteers helping to restore the gompa.  I had been to eastern Nepal many years prior, and the spring-time trip was a much-welcomed opportunity to return to the Himalayas. I thrilled to experience the clear skies and mountain views of a new part of the country.

Several years ago when work began, most of the gompa was in ruins, with just two main temples and interior courtyard buildings standing. Today the rubble of the old complex has been removed and replaced by a new stone structure to house gyalpos, or protector deities, as well as quarters for monks and a library. Tasks as volunteers including testing ways to clean statues in the gompa, with least damage to the objects, and working with local artisans to prepare plaster and help with roof construction.

Chhairo Gompa was once a thriving and influential community center for the local population, but its use gradually declined as historic trade routes became less traveled. After monks departed, and the gompa was given into the hands of local caretakers, only the core shrine rooms and courtyard were maintained.

Fast-forward to the 1990s, when Lower Mustang native and monk Shashi Dhoj Tulachan spearheaded efforts to return the gompa to its former glory. Within a few years, restoration work had begun, and in 2004, a long-term project to revive the monastic community in new quarters was underway. For nearly a decade, volunteers from Restoration Works International (RWI) have been traveling to Lower Mustang, lending their efforts to the ongoing project.

For RWI volunteers, the workday began with a short walk from Rita Guesthouse to Chhairo Gompa. Each morning we crossed the Kala Gandaki River over a suspension bridge draped with prayer flags, a picturesque way to begin our days.

The opportunity to forge personal relationships with the Nepalese working on the project is a highlight of RWI volunteer trips, and our time at Chhairo Gompa was no exception. Three of the volunteers in our group had participated in prior restoration trips to the gompa and were welcomed by old friends.

We worked alongside locals, supplementing their labors. Together, our group plastered, cleaned ancient statues, cut stones for walls and prepared walls for painting. The wall painting started while I was at the gompa. Lama Shashi Dhoj Tualachan of Chhairo Gompa is a world-renowned thangka painter as well as a Buddhist monk. The completed works will eventually cover all four walls of the gompa‘s sacred center.

We had lunch each day in the gompa kitchen: a tasty, slightly spicy dal bhat, the Nepali national dish, which consists of steamed rice, cooked lentil soup (dal) and vegetables.

Local workers–stone masons, carpenters and plasterers–provided the majority of the skilled labor for reconstruction of buildings in the complex. Construction materials were purchased locally, to keep transportation costs down, and to infuse the local economy. Workers planed rough-cut timbers to be installed as beams for the balcony above the courtyard.

Volunteers sifted sand with the local workers, who then added cow dung and water to make traditional plaster. They then spread the plaster on the wall by hand. A local stone mason used traditional methods to lay up the stones: No cement here, but a dung and sand mixture to hold things in place.

While in the Lower Mustang Valley, we took three short treks and a jeep trip. From Rita’s Gesthouse on the outskirts of Marpha, it was less than an hour’s walk through forests to Tukuche, where we visited two gompas and a brandy distillery. Our excursions to Marpha, Tukuche and Muktinath took us past green fields, along the Kali Gandaki River and through the Annapurna foothills. Our climb up to a monastery perched on a hillside above Marpha afforded great views of the town.

A day’s excursion by jeep provided vistas of snow-capped mountains., and at the very northern edge of the Lower Mustang Valley, the Muktinath Temple complex provided breathtaking mountain views. Muktinath is a holy place for both Hindus and Buddhists, who visit the temple or purification rituals using glacial mountain water.

When I returned to Nepal, I enjoyed seeing prayer flags, prayer wheels & mani stones that I had seen on my first trip to Nepal in 1978.