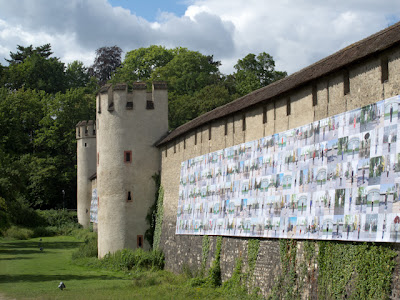 Art Basel 42, which closed on Sunday, reported a guest list that was 65,000 visitors long. This year, I found greater inspiration outside the main exhibition halls. Art Parcours placed art in Basel’s urban landscape, inviting artistic interpretations of ten internal and external spaces of St. Alban, a medieval neighborhood along the south bank of the Rhine. 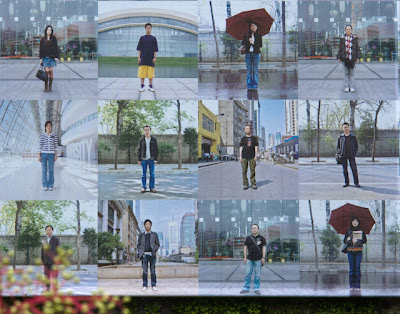 The collage featured photographic portraits of 500 of the 1,001 Chinese people that he brought to Kassel in 2007, as part of art work “Fairytale” presented at Documenta. The piece represent barriers  which must be overcome to reach a place; by contrast, the friendly security guard on duty  at the city wall offered to watch my bike, so that I could get a closer look. 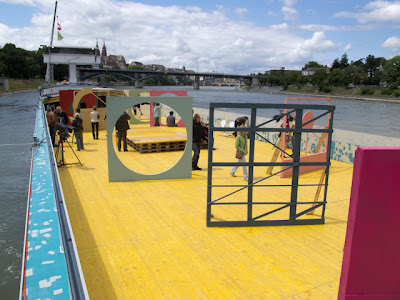 Barges ply the Rhine regularly, linking Basel to the North Sea via Rotterdam. Chris Johanson brought a bit of California style to Basel, with his mazelike installation on a cargo ship anchored a few meters offshore. With his band Sun Foot, Johanson presented an evening’s entertainment, a preview of the summer concerts held on boats and river banks here. Throughout the week, visitors could wander the deck for an alternate view of Basel’s low-slung skyline. 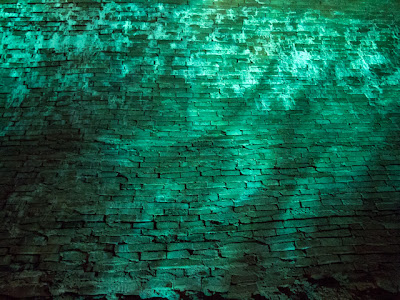 Shadows played on ancient brick walls and gravel crunched underfoot in the Blue Hawaii Bar, installed in a vaulted reservoir beneath the river bank by Canadians Janet Cardiff and George Bures Miller. Bartenders worked from a tiki hut installed above water flowing through ancient channels to a basin on the Rhine promenade. As I wandered through the place, music from the likes of Bobbie Vinton and Jim Reeves provided entertaining dislocation. 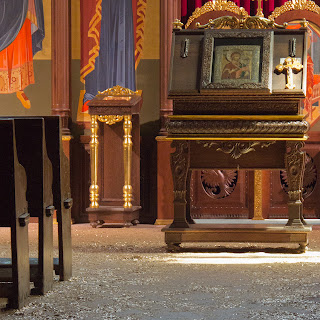 St. Alban Church, a former Benedictine cloister, was built in the 13th century, and is now a Serbian Orthodox church. Belgian Kris Martin covered the floor of the church with thousands of minuscule bronze discs. Visitors walked over the shiny debris, progressively pushing the tiny bits outside. They can now be spotted all over the neighborhood, dotting sidewalks and doorsteps, shiny reminders linking memories of the stops along the route. On a walk last evening, I caught a flash of shiny, tiny rounds along the Rhine promenade about two kilometers from the church.

All of the Art Parcours installations provided new perspectives on a familiar Basel neighborhood, but these were my personal faves. I was not the only enthusiast of these works… check out Not-Quite-Critiques for an Aussie art lover’s view of the Art Basel experience.