It was the best meal I had in Cambodia.

Cambodian cuisine derives from several sources—Khmer for sure, but with significant influences from the kingdom’s neighbors. By migration, invasion and whatever other means cuisines evolve, incremental cultural fusion results. Cuisine Wat Damnak, which opened in April in Siem Reap, showcases the best of current developments in Cambodia’s culinary timeline. 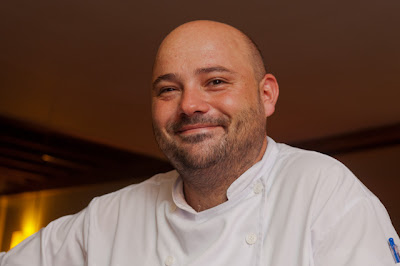 Chef Joannès Rivière and partner Carole Salmon brought their years of in-country experience to the project—he from his time as Executive Chef at Hotel de la Paix’s Meric, and head of cookery training courses at Sala Bai Hotel and Restaurant School; and she as director of the French Cultural Center in Siem Reap. With Cuisine Wat Damnak, they have managed to spring something entirely new onto a crowded restaurant scene.

“I wanted to create a restaurant centering on quality Cambodian food,” he told me. “I insist on the word Cambodian and not Khmer, as Khmer has a strong sense of national identity, and it leaves out Chinese, Cham Muslim and Vietnamese-influenced foods, all of which are represented in our menu.” 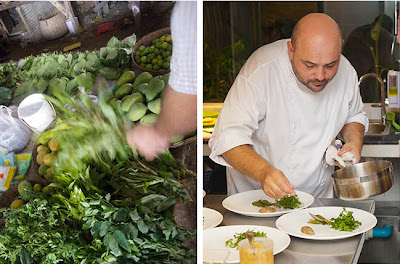 Rivière personally selects the freshest of local, seasonal ingredients for his kitchen. Whether choosing vegetables, meats and seafood, or replenishing his stock of the fish and shrimp pastes that share equal billing in Cambodian dishes, this Frenchman is ever conscious that he is an expat cooking local. The endeavor takes devotion and concentration.

On my visit, the two menus were artfully combined for sharing. A tiny braised pork rib in broth with a single calamari ring and slivered lime peel was presented as amuse-bouche. Then came the starter series: seared scallop salad with pomelo and lemon basil , eggplant-stuffed eggplant and finally, braised skate wing with coconut tree heart, caramelized palm sugar and star anis.

A plate of needle fish, tiny Mekong sole and puffer fish purchased on our morning market visit, was served atop quenelles flavored with sour leaf, chile and garlic. The yummy companion dish  of borbor soup, risotto topped with quail, prawn and Siem Reap sausage, had a crispy ginger crown.
These were followed by small Tonle Sap croaker fish in holy basil soup, and a dish of roasted free-range chicken glazed with honey and rice wine, and with sides of braised morning glory and “frog leg” parsley salad. No pictures here, but trust me, both were divine.

The savory finale was grilled prahok and pork in banana leaf, served with holy basil and round eggplant. 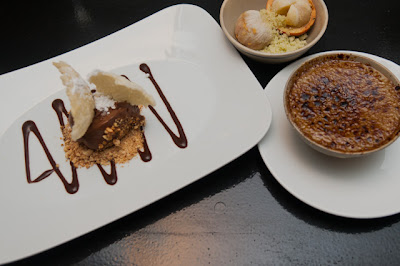 Desserts were chocolate and wild cardamom ganache, crumbled cashew nut praline and puffed rice crackers; and black sticky rice crème brulee. Both were exquisite, but since I’m a sucker for both crème brulee and sticky rice, you can guess which one carried me away.

It was a dream of a meal!

Joannès Rivière is the author of Cambodian Cooking, a book of recipes for the home kitchen based on the kitchen at Sala Bai. I’m delighted to see that the book provides helpful descriptions and photographs to help anyone new to the cuisine find their way around an Asian food market.

“Everything is better in Lebanon”