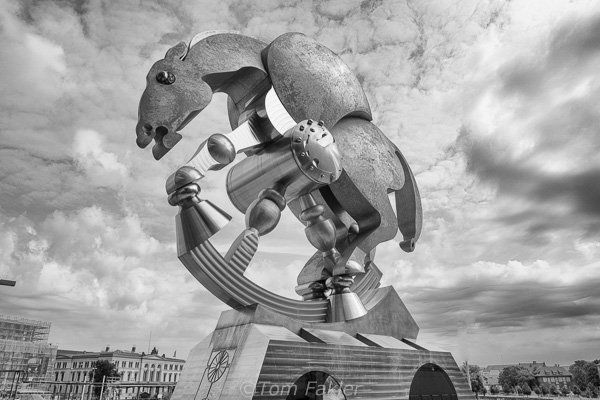 Berlin Hauptbahnhof, the main railway station of the German capital, was inaugurated in May 2006, and is the largest rail junction in Europe. The modern station, with its clean lines and all the amenities needed by a traveler, was designed to represent old and new train travel in Berlin. When Anita and I traveled to Berlin a few weeks ago, we took a tour of the station and liked what we saw.

The Hauptbahnhof is located on the site of the historic Lehrter Bahnhof, which operated from 1871 until 1951. Until it was severely damaged in World War II, the Lehrter Bahnhof was the connection point between Hannover and Berlin. After the war, it was repaired and in service until all long distance train travel was cut off by the East German regime.

Soon after the fall of the Berlin Wall in 1989, city planners began work on a transport plan for a reunified Berlin. In 1992 the federal government decided that Berlin’s new station would be built on the site of the old Lehrter Bahnhof, in an area close to the center of Berlin and government buildings, but not heavily populated.

The new station was designed by Hamburg architecture firm Gerkan, Marg and Partners. It has five levels. The main hall’s curved glass roof is about 85 meters (297 feet) wide and 120 meters (390 feet) long. This provides light for all five levels and gives the station an open feel.

I especially like the use of glass and structural steel in the building, which to me captures the strength of the construction. The use of glass makes the station well lit and spacious. Viewing Berlin’s Hauptbahnhof in black and white highlights the structure more clearly.

We visited Berlin as guests of Deutsche Bahn and Visit Berlin, while attending Potsdamer Schlössernacht, one of many German Festivals across the country through the summer and autumn seasons.

Ulugbek of Uzbekistan—reaching for the stars