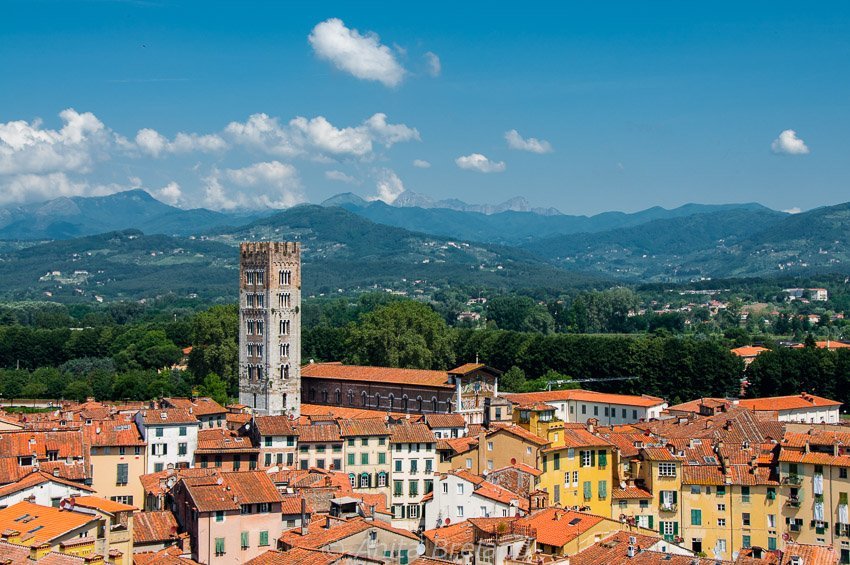 The train journey from Florence to Lucca was poky, a signal to ratchet down, way down. The regional train made four stops in factory-intensive suburbs of Florence before reaching Pistoia; then halted six times in towns set among low-rise hills, pines silhouetted in the distance. Much of the way, close to the tracks, the landscape was that of horticulture, a carpet of garden centers and nurseries stretching into the distance. Eventually, the vineyards became more substantial and the hills, hillier. By the time the train chugged into Lucca’s station, my internal clock had been reset to the leisurely pace of the little walled city.

I first visited Lucca some years ago on a day trip from Pisa. On a wet November day, sodden laundry moped on droopy lines between the windows of apartments ringing a deserted Piazza Anfiteatro. The place seemed haunted, a scene from a film shot in grainy black and white. Under a summer sun, though, diners relaxed under their umbrellas and I had an entirely new memory of this place.

Over the next couple of days, I was able to spend time exploring Lucca in a leisurely way. It did not take long for me to fall in love with the pace of life here, or with the small pleasures of wandering–on foot and on a bike–through the postcard that is Lucca. Life in the Tuscan slow lane turned out to be the perfect antidote to Florence’s glut of fabulous art and tourist overload! 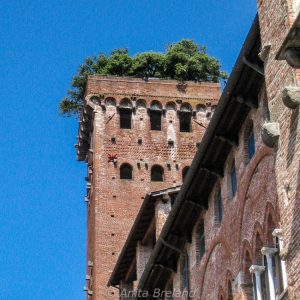 The enjoyment of Lucca’s medieval heart is in the details. San Michele in Foro’s curiously high façade rises high above a low-slung base, its archangel ready to flap movable wings. Each column is different: sculpted, twisted or candy-striped. The Duomo di San Martino and its strikingly asymmetric façade, right-hand arch and loggias downsized to fit available space. The Torre Guinigi is eccentrically hirsute, capped by a stand of trees with their roots growing down into the room below the viewing platform.

The town is kitsch-free, its people friendly and the sights easy to enjoy. This week, kids clambered onto the base of a statue in Piazza Napoleone. A few paces away, a television was set up for the World Cup, just in time to show Italy dropping out of contention. Via Fillungo (“the long thread”) heads north from the piazza toward the city’s main sights and shopping. The town’s coffee bar and gelateria culture is robust, and I enjoyed sampling coffee and cake at Simi’s, Puccini’s favorite coffee bar.

The city’s four-kilometer encircling medieval wall is paved with a broad pedestrian street that offers a mostly shady walk or cycle of the perimeter of the old town. Benches and grassy playgrounds are dotted about the wider sections. On the hotel’s loaner bike, I made the ride in both directions, stopping for ice cream from a mobile stand putt-putting on its route along the wall.

Life in Lucca’s slow lane turned out to be the perfect antidote to Florence’s glut of fabulous art and tourist overload!