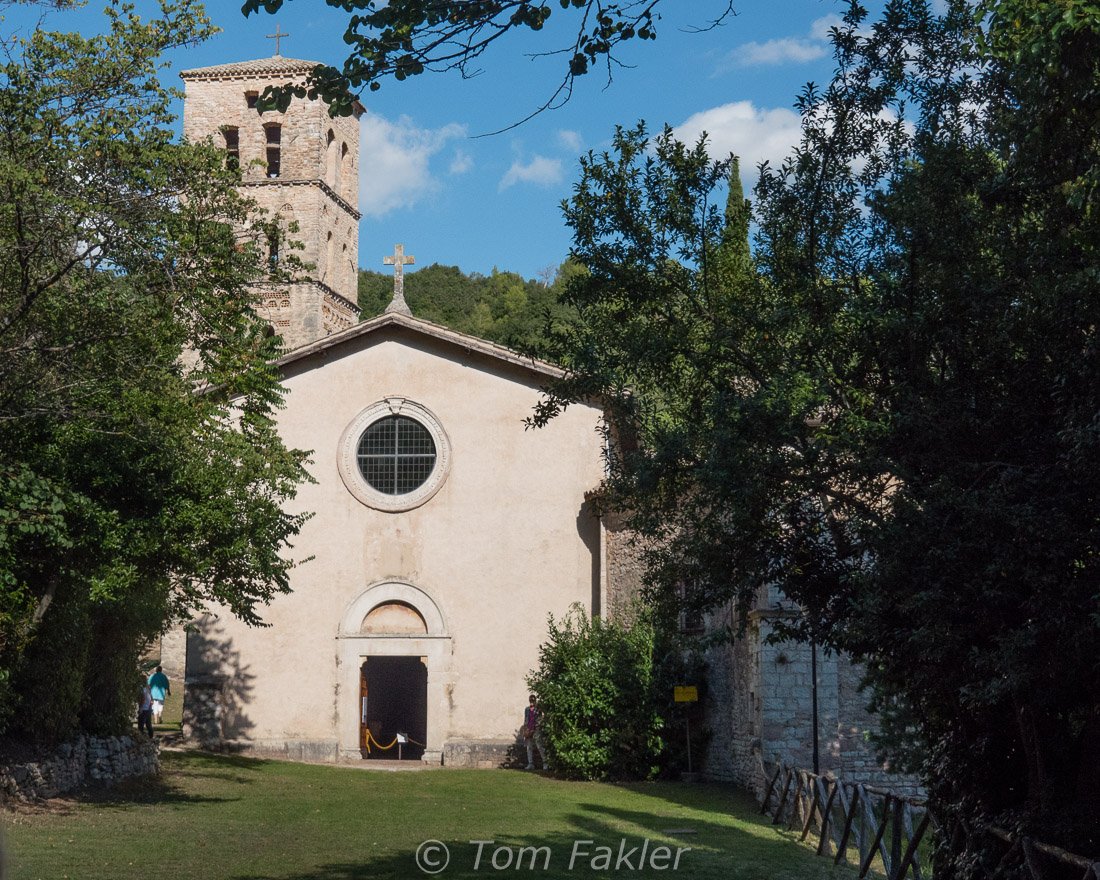 Our recent walk on the Cammino di San Benedetto began at a picturesque church in Ferentillo, Umbria. The Romanesque church at Abbazia di San Pietro in Valle  houses some particularly fine Roman sarcophagi, a Lombard altar and floor mosaics. The most important works, though, are on the walls. The nave is decorated with a large cycle of frescoes, painted at the end of the 12th century. Although incomplete, the remaining images are still vibrantly hued, and the most important frescoes in central Italy. The late-Byzantine frescoes inspired Giotto, and are a reference for modern-day art students.

Legend has it that two hermits–Lazarus and John– traveled from Syria to this place in the sixth century. Here, just 30 kilometers from present-day Spoleto, they built a hermitage, which became a place of worship for the local people. Two centuries later, the Duke of Spoleto took monastic vows, the church and monastery were founded, and the duke was buried here. The Abbey church has been a Lombard mausoleum every since.

In the Middle Ages, the church was partially destroyed by invading Saracens, but rebuilt between the 10th and 11th centuries. Over time, the monastery was Benedictine, then Cistercian. The Abbazia di San Pietro is still the most important church of Ferentillo.

By the late 19th century, the Abbey had passed into private hands, and is now owned by the Ermete Costanzi family, who oversaw a restoration completed in 1998. The monastery buildings today house a luxury hotel and restaurant. The church is a pilgrimage church for St. Francis’ Way, and the hotel/church complex is a popular destination for weddings.

A blessing for pilgrims

Don David Travaglie is priest at Abbazia di San Pietro in Valle, and was there to greet our group of pilgrims. After we had toured the church, he asked us to gather together and to grasp the ‘bastone del pellegrino’, then administered a traditional pilgrim’s blessing–a ‘destinazione gioia’–for us. It was a special moment.

After our time in the church, we were welcomed to the hotel restaurant foyer for a food and wine tasting, featuring local foods presented by the producers. Tasty bites included trout and meatballs, biscuits and oils flavored with ‘melangola‘ or bitter orange. There were also hearty soups–fava bean and multi-grain–and the local version of torte d’erbe a country vegetable pie I first tasted last year in Lunigiana. Beverages were Umbrian wines produced within a 10-kilometer radius of the hotel and locally-produced craft beers. I especially enjoyed Anne-Santi, a three-grape white wine blend.

In these deep valleys, it is easy to imagine the relief of medieval travelers as they arrived at their next stop after a long day’s walk. In fact, as we left, two modern-day pilgrims made their way up the hill to the Abbey. They arrived too late for the brilliant afternoon sunlight on stone–but just in time for a delicious dinner!

Want to know more about Umbria?

We just put a toe into ‘the green heart of Italy’ but were enchanted and eager to return. For Umbria travel inspiration and practical advice, take a look at Wandering Italy’s Umbria Map & Travel Guide and of course, the official website of Umbria Tourism.

Our walk along the Cammino di San Benedetto was part of the launch of of Italian Wonder Ways. Grazie,  Umbria Tourism!