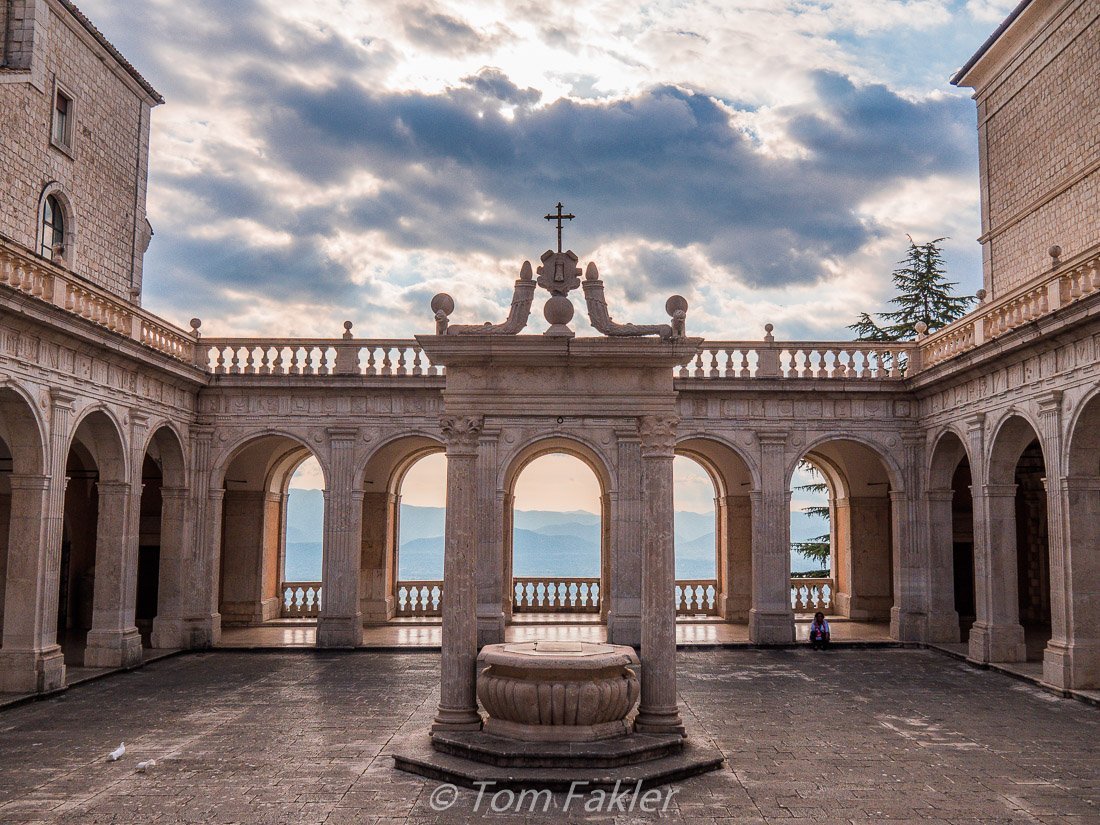 31 October 2016. The earthquakes of October destroyed the Basilica of Saint Benedict in Norcia and have restricted access to the northernmost stretches of the Cammino di San Benedetto. Much of the Cammino remains open, and just as beautiful and welcoming as ever!

Tom and I love Italy, and have traveled extensively there. However, until recently, when we were invited to walk the Cammino di San Benedetto (Way of Saint Benedict), one of the newly launched Italian Wonder Ways, we had not spent time in the Lazio Region. We quickly learned that Lazio is, indeed so much “more than Rome”. We enjoyed stunning sunsets all along the Cammino and arrived at our final stop at Montecassino Abbey, just in time for another heavenly display.

For five days, we walked country trails and meandered through nature and small villages. Along the way we received a grand dose of Italian hospitality, stunning natural beauty and great local food. And we had lessons in history, archeology and religion to boot! Our guide for the walk was Simone Frignani, who developed the Cammino di San Benedetto and is its greatest evangelist.

Who was Saint Benedict? 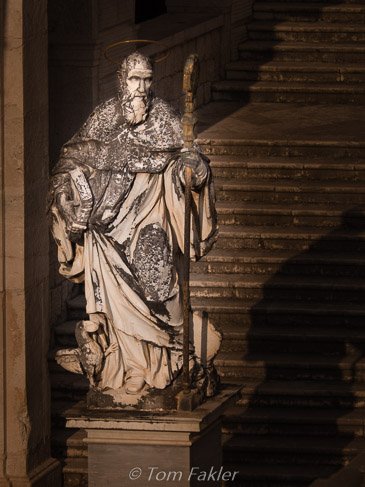 Benedict of Norcia (he was born there, in 480), patron saint of Europe, came from a family of Roman origin. At the time, barbarians were literally at the gates of Europe, and Christianity was under threat. The monasteries Benedict founded played a major role in preserving and transmitting culture across the continent.

After a time in Rome, Benedict moved to Subiaco, in present-day Lazio, where he lived as a hermit for several years and founded monasteries in the area (the first one, in the ruins of Nero’s villa, beside the Aniene River). After thirty years in Subiaco, he moved to the Cassino area, where he spent the remaining years of his life. The Rule of St. Benedict — with its precept of ora et labora (‘pray and work’)–was written at Montecassino Abbey. This text was the essential management tool of its day, a rule-book for monastic life still followed by religious communities around the world.

Most of Italy’s pilgrimage paths follow routes from various points in Europe to Rome. The Cammino di San Benedetto does not. Strictly speaking, this route is not one of historical religious pilgrimage, tracing a path trodden by centuries of devotion. Rather, it follows a trail that connects the dots of the most important places in the life of Saint Benedict. 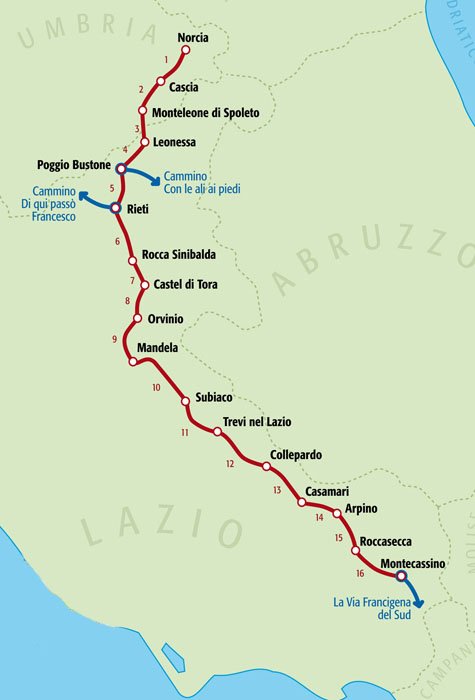 The path begins at the saint’s birthplace in Norcia, Umbria, and leads south into Lazio. There, the path highlights Benedict’s years as a hermit and founder of monasteries in Subiaco. It terminates in Montecassino, where the saint spent his last years and is buried.

The Cammino runs for 310 kilometers, divided into stages of approximately 20 kilometers each. The route celebrates nature and local traditions, leaving the winding mountain roads to follow small rivers and reclaimed paths between villages.

We were not able to begin our walk in Norcia, due to the recent earthquake that affected mountain villages nearby. Instead, we received a blessing for our pilgrimage in the small church at San Pietro in Valle Abbey in Umbria, before stepping onto the path in Castel di Tora, in Lazio.

The villages whose mayors, restaurateurs and hotel keepers turned out to welcome us included Rieti, Castel di Tora, Orvinio, Subiaco, Trevi nel Lazio, Collepardo, Casamari, Arpino and Rocccasecca. Stay tuned for more about the experiences and foods they shared with us! 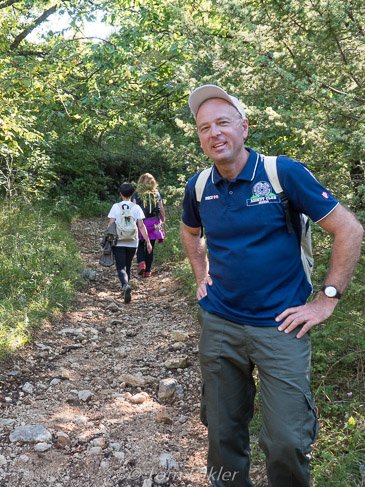 Simone Frignani, a lifelong walker and cyclist, is a biologist-turned teacher of theology. He loves the mountains and valleys of central Italy and he loves people. A scout in Italy, Simone discovered the “art of pilgrimage” in Spain and more recently experienced the freedom of the monastic life lived by the monks of Mt. Athos in Greece. Developing the Cammino di San Benedetto enabled him to combine a passion for nature with the beauty and sacred references of the life of Saint Benedict. He says it is the “essentiality” of the Cammino that he feels is its greatest message to walkers of all levels and ages.

For two years, Simone worked on his own to clear existing paths, create them where none existed and seek out hospitality for guests in the villages and towns of the region. Then, with the help of local citizens who shared his vision–Simone calls them “people of providence”–paths were improved and signposted, showing the way through the holy valleys and hilltops of Lazio. The Cammino di San Benedetto now welcome upwards of 4,000 travelers each year, and efforts continue to develop tourism infrastructure here. Simone is also leading a project to restore hostel services for pilgrims in Norcia, devastated in the October earthquakes. 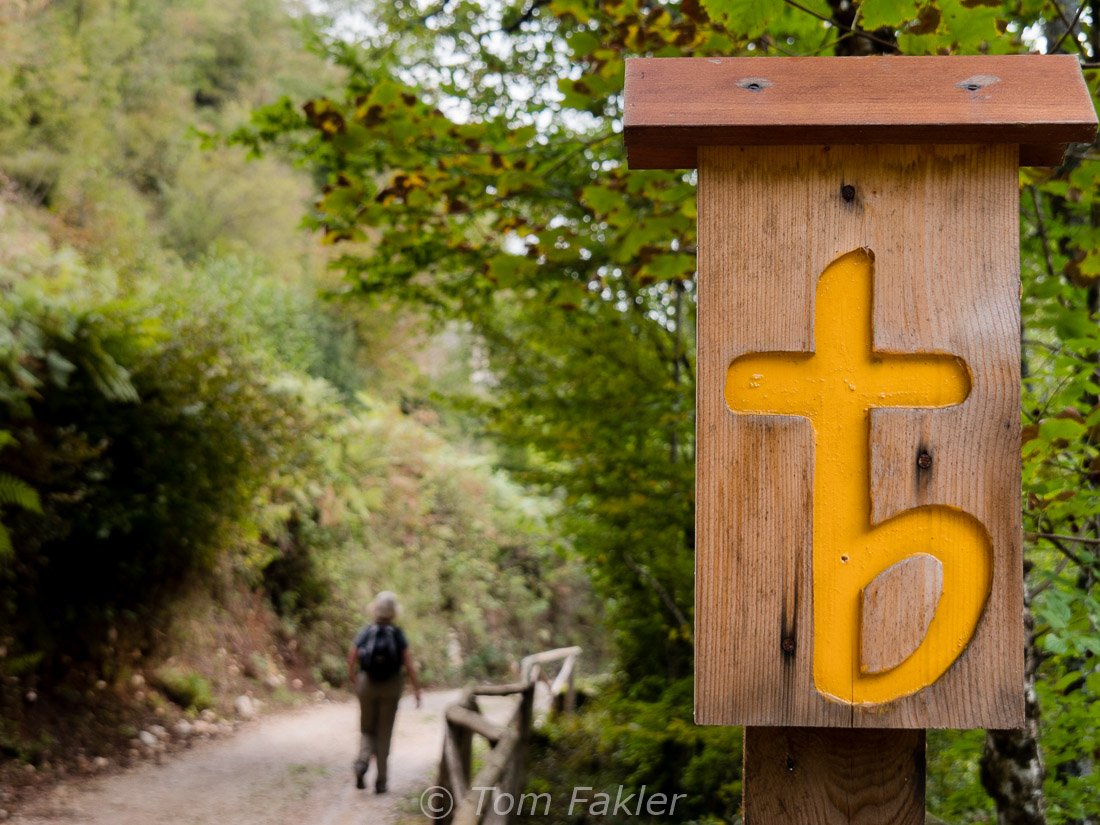 People in this part of Lazio are not accustomed to the hordes of foreign tourists that flood Italy’s best-known places. Hospitality here comes in the form of a ready welcome into tiny villages, and an eagerness to share the country fare of a mountain region. Visitors may well be drawn into a village festival, dance or village tour. The friendly welcome comes from the heart, albeit not always in English.

Our band of journalists, bloggers and photographers represented at least six nationalities and an age range of about 40 years. Some of us were Roman Catholic, some not. Our group included several avid hikers, a couple of trail runners and sometime-walkers of varying levels of capability and endurance.

After we reached Montecassino, our hosts reminded us that a big lesson of the Camminos is that we cannot walk life’s path alone. We need other people. That was certainly true for us, and we found friendship within the group and along the path.

Since the earthquakes of October 2016, the route is disrupted from Norcia. It is recommended to plan a walk from Leonessa southward. For updates on route conditions, reports of other pilgrims and progress reports on restoration of facilities at Norcia, check the Cammino di San Benedetto Facebook page.

Thanks to Visit Lazio for our great experience on the Cammino di San Benedetto, to  Simone Frignani for your hard work and inspiration, and to Laura Dimattei of Francesco’s Ways for your cheerful support. We enjoyed your company throughout our trip, and were honored to be part of this first-ever celebration of Italian Wonder Ways!

In Alberobello, Cucina Povera gets an upgrade