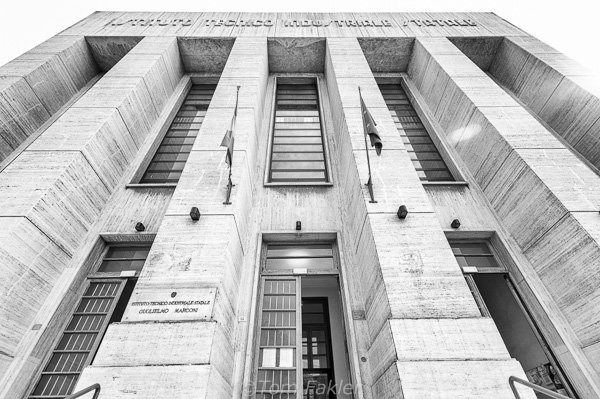 Anita and I recently participated on a blog trip in the Forlì, Italy region, focusing on the architecture of the ‘Ventennio’, as the twenty years of the Fascist regime is known here. We took a walking tour on Viale della Libertà, from the Forlì train station to the Monument to the Fallen. Along the boulevard, we saw the evolution from Neoclassical to rationalist architecture. I enjoyed learning about these buildings, designed and built between 1925 and 1941.

The Comune di Forlì has taken a leadership role in the European Union’s Atrium Project, studying and preserving the architecture of the period. Forlì itself is a museum of these buildings. We were surprised at how interesting the architecture turned out to be, and to learn the stories behind some of its best examples.

The appeal of rationalist architecture Rationalist architecture’s minimal ornamentation maintained a strong commitment to the aesthetics of Cubism. It also worked to maximize economy in the use of land. In construction, architects and builders paid attention to the specific characteristics of different materials, such as wood, iron and glass.

Six buildings viewed in our walk highlight the style changes of the ‘Ventennio’. Here is a look at key elements of their façades.

We started at the train station, our introduction to rationalist architecture in Forlì. Completed in 1925, this building shows the end of the Neoclassical era and the beginning of the rationalist period. Designed by Enzio Bianchi, the station is Cubist in form, with decorations left over from the Neoclassical period. 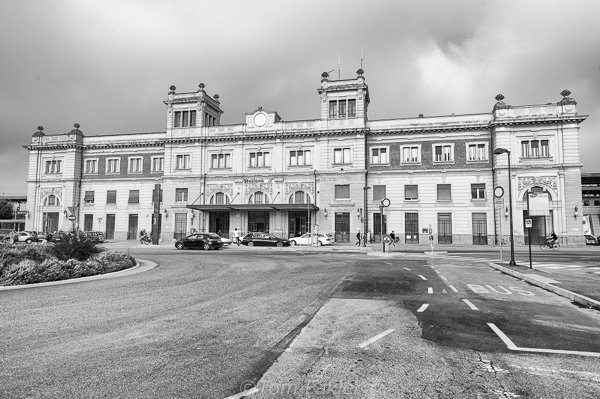 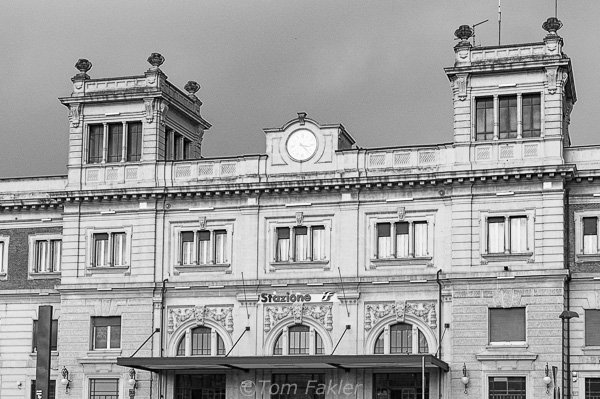 As we walked along Viale della Libertà, we could see that by 1941, the influence of Cubism had grown, and decorations had been reduced to purely architectural elements: arches over windows, and overhangs on roofs and columns.

Buildings on either side of Viale della Libertà at Viale Andrea Costa were built as residences for railroad workers and public employees. Socially, these buildings were significant: they were the first homes for Italian workers to offer amenities such as indoor plumbing, heating and electricity. These functional buildings had shops at ground level and living spaces above. They were designed by Paolo Angella and completed in 1933.

Built in the shape of Neoclassical villas, the buildings’ exteriors show a transition to rationalist architecture using simple materials. Architectural patterns appeared only in the front, lower walls imitated travertine and upper façades were constructed of brick and mortar. 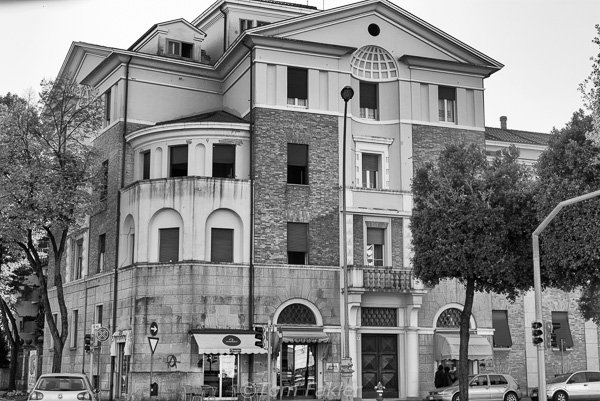 In the next block, the Scuola Elementare, designed by Arnaldo Fuzzi, was built in 1932. The building set an example of repetition of architectural elements as decoration, both for windows and the fence. It also makes use of an ancient material, bricks. 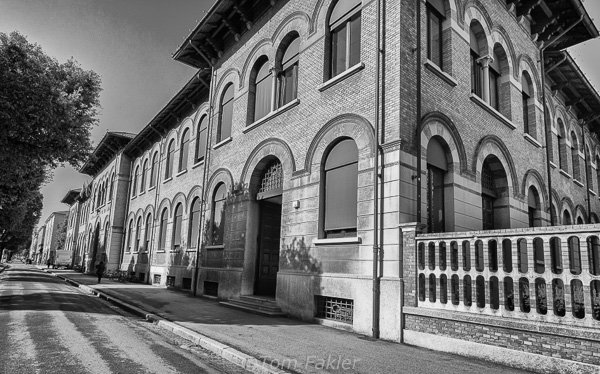 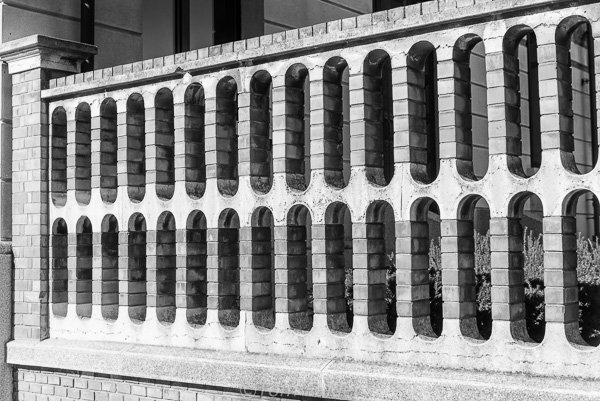 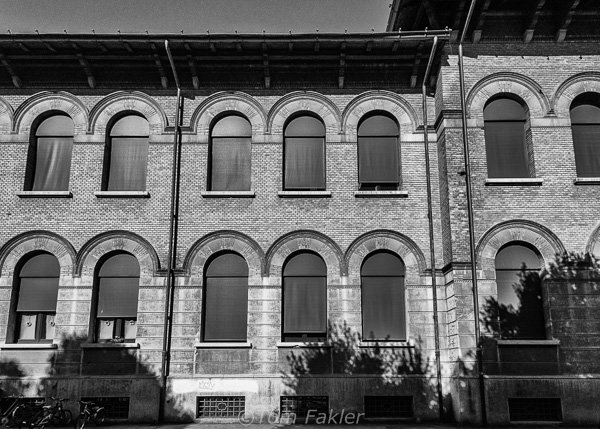 Across the street from the elementary school is a cube-shaped structure using architectural elements as decoration: the Industrial and Technical Institute, also designed by Arnaldo Fuzzi, and finished in 1941.

Its massive front entrance features six vertical columns, placed atop a set of stairs to raise the columns. There are no curved lines on the exterior, but repetitive windows and columns above the entrance serve as decorative elements. This was a cutting-edge building at the time, significant for its internal spatial organization. 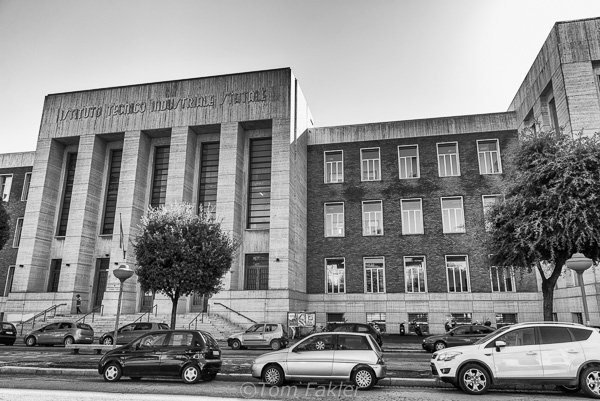 We came to the EX- G.I.L. building next. It has an entrance with a similar idea, but not nearly as grand an entrance as the Industrial and Technical Institute. One of the most representative rationalist buildings in Forlì, it was designed by Cesare Valle. Completed in 1935, before the Industrial and Technical Institute, it shows less Cubist influence. This functional building (every town in Fascist Italy had a “Casa Balilla” or youth house) features two blocks connected by a tower, and constructed of reinforced concrete. 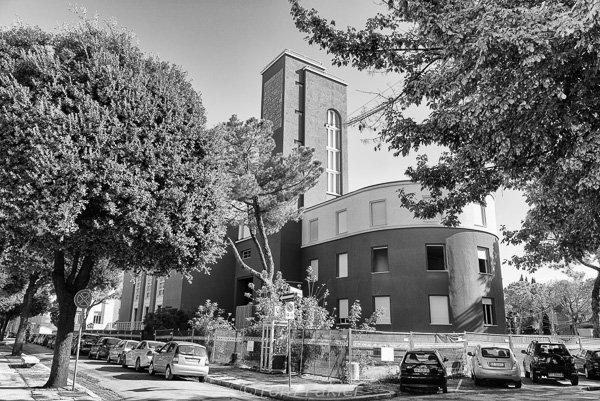 On the Piazza della Vittoria at the end of Viale della Libertà we find the Air Force College, designed by Cesare Valle. This building does not have a single curved line on the exterior. Of the set of rationalist architecture style buildings on the street, this was built last, in 1941.

To me, it shows the most advanced lines of rationalist architecture in Forlì. Tall, unadorned and raised columns create a strong look for the façade. As with the Technical Institute, large windows, placed repetitively, serve as decorative elements. 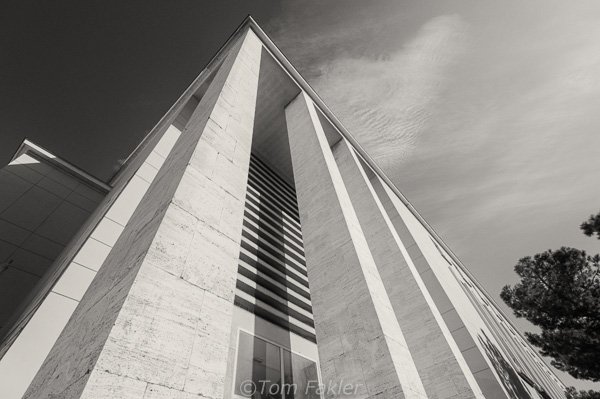 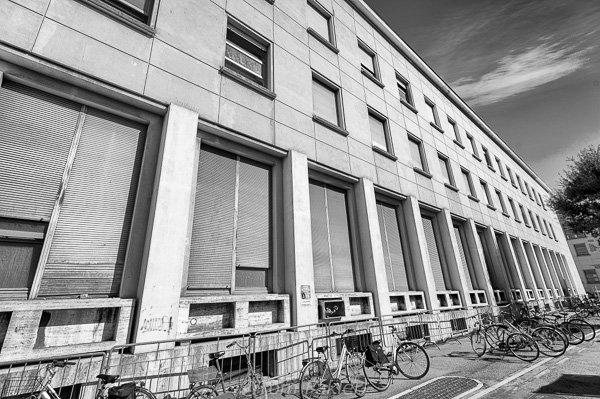 Atrium Project partners from 11 countries in southeast Europe are united in recognizing the importance of the twentieth century’s architectural heritage and its complex, contradictory and sometimes uncomfortable relation to European history. Visibility for rationalist architecture can help link its examples together along a shared cultural route.

Our visit was part of the Atrium Blog Tour sponsored by the Forlì Civil Council  and the Atrium European Project in collaboration with 21Grammy. Impressions of what we saw are mine.