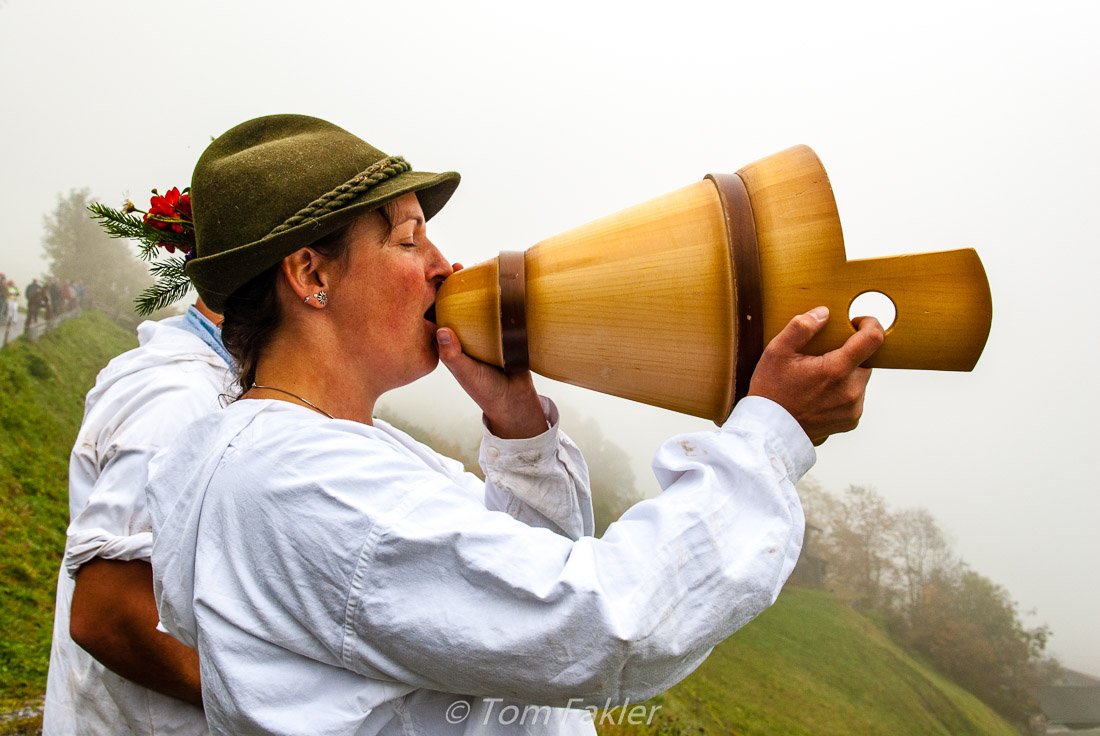 Every autumn, Swiss cows in their droves leave the high pastures of summer to return to the valleys, collared with bells and with bouquets on their heads. In an ancestral tradition dating to the early Middle Ages, the arrival of cows in Swiss valleys is celebrated across the country on strictly scheduled dates. These get-togethers are much more than country festivals, though. The farmers and cheesemakers involved are all taking advantage of Switzerland’s extraordinary collage of mountains and valleys. Transhumance, the practice of shifting animals to different altitudes depending on the season, provides them with the milk that goes into a distinctive range of Alpkäse, or alp cheeses . In June, Swiss cows head up to alpine pastures. The transhumance of autumn, la désalpe in French-speaking Switzerland and der Alpabzug to German speakers, brings them down again. 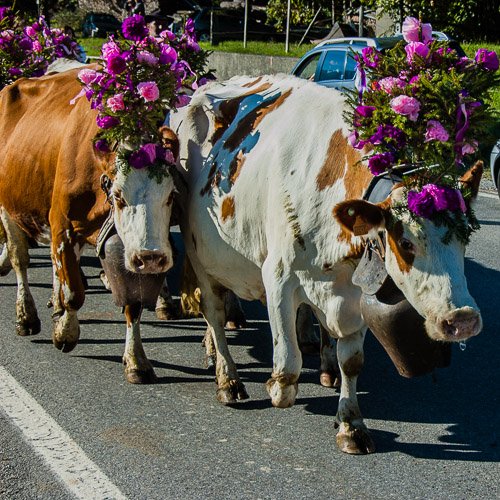 Valleys cut off in winter from the rest of the country have kept their distinct visual, acoustic, and culinary traditions. From Sumiswald in Canton Bern to Urnäsch in Canton Apenzell, farmers markets, live music, and all manner of cheese delicacies mark the cows’ return from Alpine pastures. The festivities last all day, with flag throwing, alphorns, and stalls selling regional specialties. Désalpe/Alpabzug happens, rain or shine. No matter the weather, this is the time to join locals for food, wine and music. In the more remote regions, the day of the cows’ descent is a mostly local affair, with surprisingly few visitors on hand.

Switzerland’s festival season cranks into overdrive in autumn (perhaps the best time for food travel here?). Anyone wanting to experience la désalpe/der Abzug in Switzerland is spoiled for choice. During our years in Switzerland, Tom and I made it to several of the country’s colorful, cow-centric festivals. And year-round, we enjoyed all kinds of glorious al cheeses!

By the end of the 18th century, places such as Gruyère were already cheese making centers, with hundreds of working alpine pastures. In the mountains of Switzerland, for four months in summer, cheese is made at altitude, often over wood fires. Every round is imbued with the aromas of alpine flora before it is sent to the valley to be refined in the cellars of village dairies, brushed and coated daily with brine for two-to-three months.

The microclimates of the mountain pastures of Switzerland produce the flowers, grasses and alpine herbs that flavor the cheeses of summer. Transhumance is the action behind nuanced milk flavors that affect the taste of these cheeses, depending on the time of year and location of production. Cheese rounds produced in the mountains and brought down for aging through the winter are date-stamped, and generally, command the highest prices from connoisseurs. Here’s what Culture Magazine says about the diversity and qualities of alpine cheeses.

All across Switzerland, most villages with a mountain backdrop and cows practice désalpe/Alpbzug. When the cows reach town, they’ll parade through the streets with heifers, sheep, goats, and sometimes pigs. The events take place over the span of about a month, beginning in mid-September. This year, Switzerland’s autumn traditions, like so much else, have been affected by coronavirus concerns. In this season of Covid-19, some désalpe/Alpbzug events are taking place. Others, such as the Alp Spektakel in Prättigau and Seewis,La désalpe de Charmey, and theFoire de Albueve are on hiatus until 2021.

For the latest information, visit the Switzerland Tourism website for a list of dates and places for Alpine festivals, with links to local tourism sites.