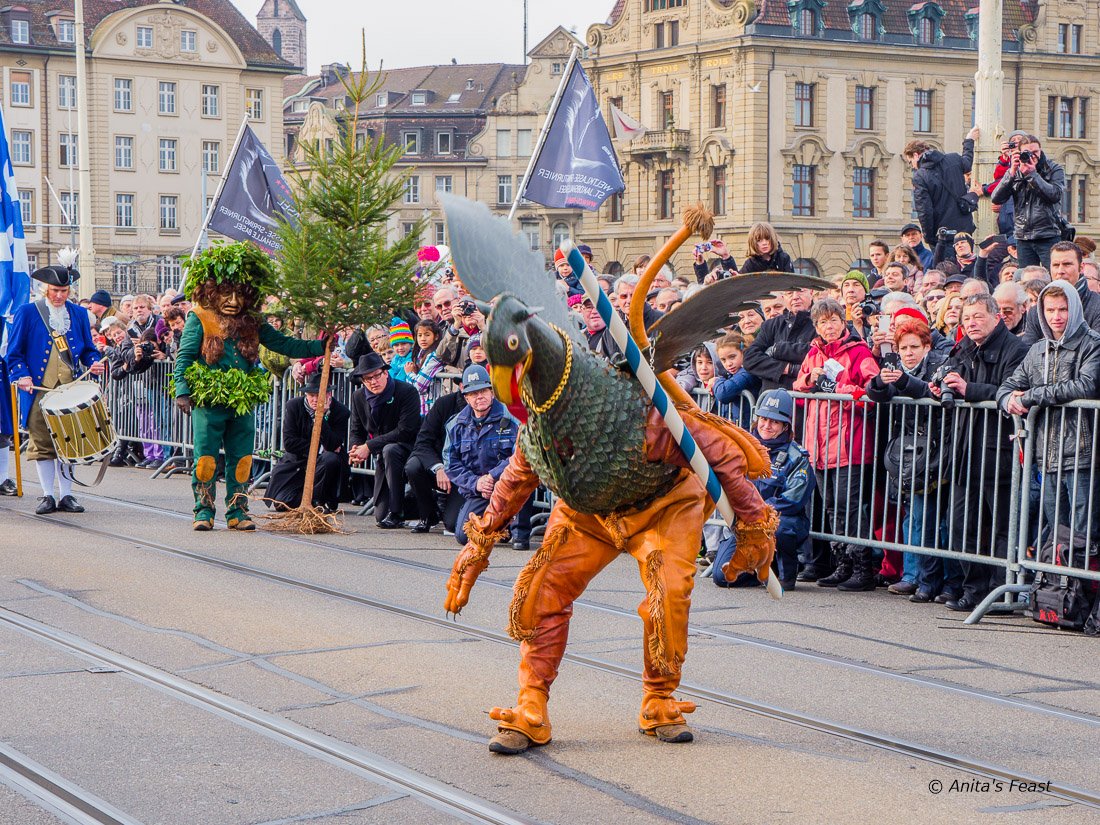 A resounding boom from a raft on the Rhine, and the “only in (Klein)basel” ritual known as Vogel Gryff is underway. When Tom and I lived in Switzerland, our apartment was right above the Rhine, quite near to this wintertime event. Several times, we followed the crowds down to the river and across the Mittlere Brücke to watch Vogel Gryff, and cheer on the antics of the heraldic figures central to a centuries-long tradition.

Vogel Gryff is the day when Kleinbasel (Lesser Basel)–-that smaller part of town on the north side of the river–gives Grossbasel, or Greater Basel, its bum. Literally. The day is filled with symbolism, some of it rather obscure. Every January, though, the players of Vogel Gryff, can be counted on to follow the same, highly entertaining, format. The annual ruckus has gone on without interruption for centuries, except for a brief hiatus under the dominion of Napoleon. 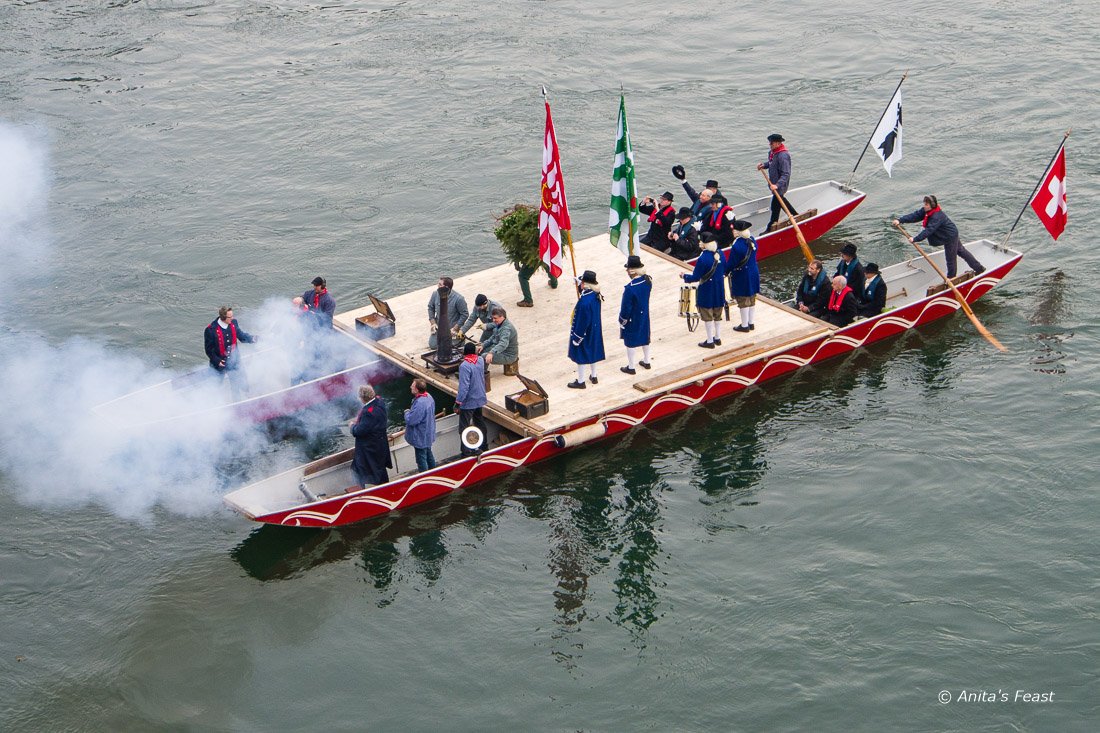 Vogel Gryff dramatizes the ancient rivalry between Kleinbasel and Grossbasel, the latter historically the richer of the two communities. The fast-flowing Rhine River runs between the two sections of the city, which were joined by a stone bridge originally built in 1225. A century later, the two sides were united to form the city of Basel, and Kleinbasel has held a grudge ever since. Vogel Gryff provides an all-day opportunity for some symbolic nose snubbing.

The festive day is named after the Vogel Gryff, or ‘griffin’ that represents one of the three Honorable Societies, or guilds, of Kleinbasel.  The mascots of the other two guilds are also mythical creatures: Wild Maa, or ‘wild man’ and the Leu, or ‘lion’.

Wild Man is a demon that comes after the winter solstice, promising fertility and new life. He swings an excavated fir sapling, and is wreathed in ivy, hung with seed pods or apples around his head and hips.

Lion symbolizes strength and power, fire and light. He wears a mask hammered from copper and carries a green and white staff. He does a lively dance, making sweeping movements with his paw and exuding vitality.

The Vogel Gryff is a griffin, proud mythical beast, half lion and half eagle, a symbol of the spirit, winged and free. He holds a long blue and white scepter, with an appearance and dance that are proud and solemn.

The events of the day

Wild Man opens the party, floating down the Rhine on a platform set astride two boats, dancing to the accompaniment of snare drums and small cannon fire, as the raft rides the swift current. Throughout the journey downstream, Wild Man and his honor guard keep their backs turned to the Grossbasel riverbank and the stately homes on the ridge above the Rhine. 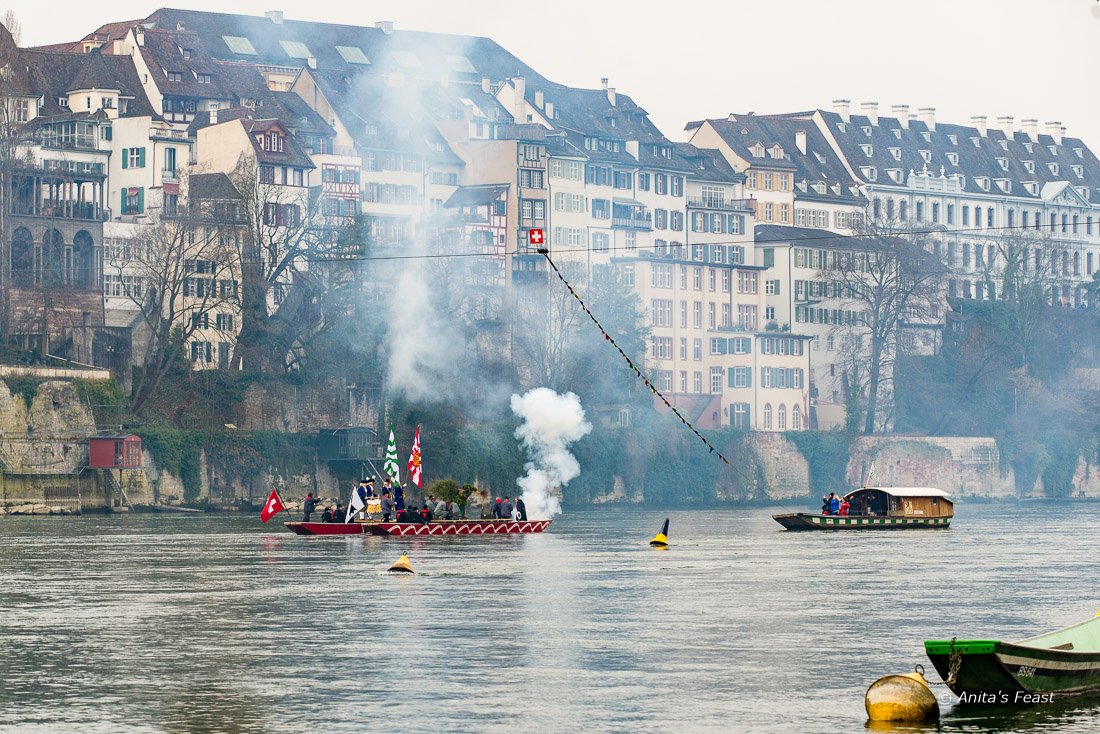 When the boats dock at the Kleines Klingental Museum in Kleinbasel, Wild Man leaps ashore and is joined by the Vogel Gryff and Leu and their companions, jesters known as ‘the four fools of Ueli’. Together with the drummers and standard bearers, they make 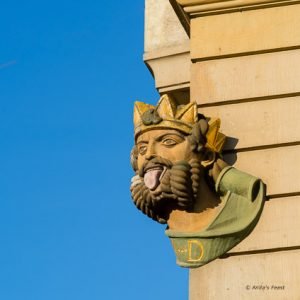 their way to the Mittlere Brücke where assorted officials and a crowd of townspeople await. The fools lead the way onto the bridge, rattling cans to collect money for charity. Drummers and standard bearers are next, and finally, each of the three figures, ready to take his star turn.

The trio make a show of turning their backs on Grossbasel on the bridge, and on the figure known as Lalle König (the 17th-century symbol of Basel mounted on the corner of a building at the Grossbasel end of the bridge).  Each Vogel Gryff character performs his dance–twice–and presents himself to an official who doffs his hat.

Once the niceties are done, the characters run through the streets of Kleinbasel on a fixed route. They stop for ‘drinking pauses’ at specified locales, saluting their honor societies. They also dance maniacally at various points along the way. Wild Man chases kids and brandishes his sapling, and the trio is joined by passersby, who run alongside for a time. The celebrations continue until late in the evening.

Vogel Gryff is not Carnival!

The symbols and processions of Vogel Gryff date back to the sixteenth century, although the particulars of the its origins are rather obscure.  For a dose of medieval history, Kleinbasel style, the three societies’ website offers the best rendition of the Vogel Gryff story (in German) I’ve found.

Vogel Gryff is not about Carnival nor the important guilds of Grossbasel. It is also not an equal-opportunity event, as the honor societies remain an all-male domain–perhaps not surprising, as they originated in the Middle Ages.  It is, however, a popular annual happening for the people of Basel, and especially Kleinbasel, society members or not. And Vogel Gryff, along with Basler Fasnacht and the characters of Basel’s unique Carnival celebration, are some of the most compelling memories we hold from our time in Switzerland.