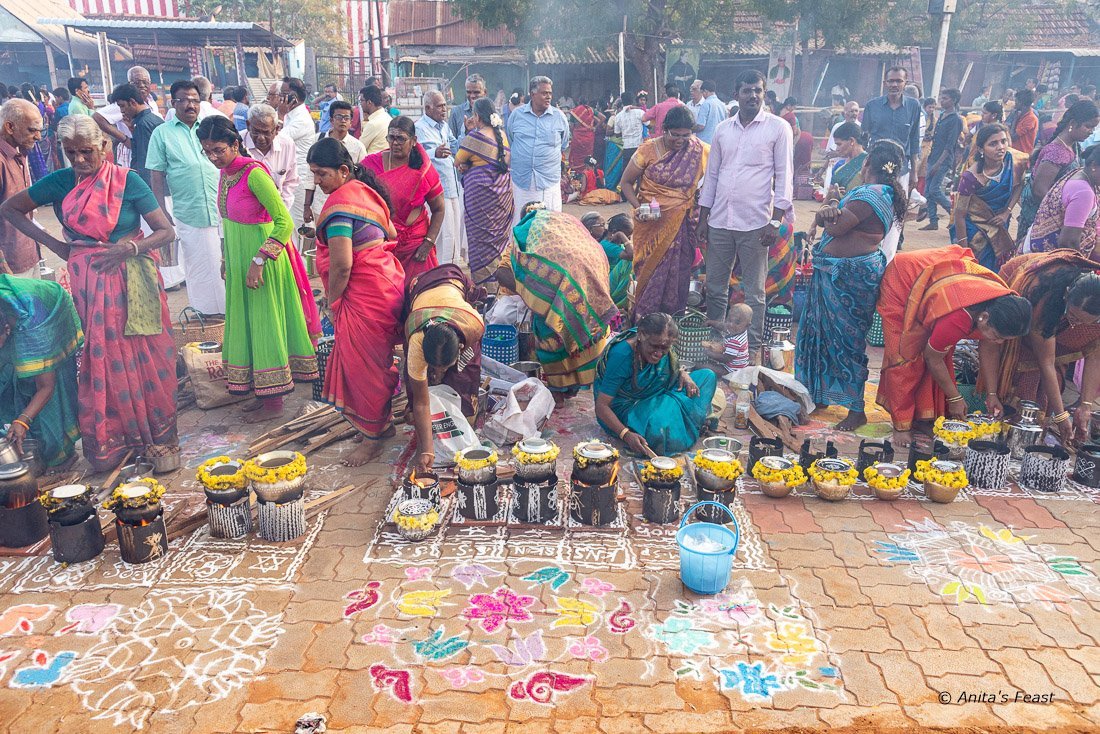 “Please join us!” the woman in a gold-trimmed green sari exclaimed, waving a wooden spoon in our direction. Sweet smoke wafted from hundreds of cooking fires arrayed in front of the temple at Nattarasankottai, in the Chettinad region of Tamil Nadu, India. Women stoked fires under pots of Sakkari Pongal, or ‘sweet Pongal’, a jaggery-infused rice dish eaten at harvest time here. Families milled about, renewing acquaintances, and to our delight, introduced themselves to us, too. More than 900 (!) Chettiar families had gathered for a clan reunion, timed to coincide with Pongal, the annual festival celebrated in January by Tamils everywhere. Tom and I had landed smack in the middle of the goings-on, for a memorable afternoon experiencing a unique version of an ancient tradition.

Pongal is a Hindu harvest festival celebrated in the month of January after the winter solstice. It marks the sun’s journey northward, an auspicious astronomical event. The joyous sounds of bells, drums, and conch shells echo from temples, for the four-day celebration. Originally a festival for the farming community, today Pongal is enjoyed by all. There are numerous cultural and regional variations in many parts of India.  Sometimes called ‘Indian Thanksgiving’, the holiday also has legendary associations with Lord Krishna and Lord Shiva.

The word pongal connotes ‘spillover’, or ‘overflowing’, and is not only the name of a festival but also the a popular South Indian dish prepared with rice and moong dal and can be either sweet or savory. Savory pongal is the centerpiece of a vegetarian meal of eggplant, sambar, vadai, idli and spice accompaniments.  Sweet pongal with jaggery is the celebratory version used to celebrate Surya Pongal, and the version served to us in Nattarasankottai.

Surya Pongal, the second day of the festival, is especially important. For Surya Pongal, women in virtually every household arise early to create kolams, elaborate floor designs worked by hand with colored rice powder. A kolam takes hours to make, and we saw many of them in our travels through Tamil Nadu. Smaller renditions of the floor designs fronted the many pots of sweet pongal bubbling to a boil for the Chettiar reunion.

When we arrived at The Bangala, our hotel in Karaikudi, just a few hours prior, the house manager had met us with almost breathless urgency, with an invitation to attend a reunion and Pongal celebration, being held that very afternoon. We would need to provide our own transportation, but the owner of The Bangala, herself Chettiar, wanted to be sure we had an opportunity to take part. A quick consultation with our driver Ganesh, and we were off.

Four other Bangala guests met us in Nattarasankottai, where we joined eight Belgian travelers just in from Madurai, courtesy of the Tamil Nadu Tourist Office there. We were presented with marigold garlands before boarding brightly painted ox-drawn carts for a procession around the town. Residents and clan members lined the streets to cheer us on, many with children on their shoulders or underfoot. A band played. We waved. Tom ran alongside with his camera. I felt a bit silly but enjoyed the view of friendly faces as we rattled past heritage buildings, some lit by an afternoon sun.

After a circuit of the town, our carts lumbered onto the temple square, where a military platoon stood at attention and announcements blared from speakers overhead. We climbed down from the carts for a short walk through the crowd with the mayor and our host, a Chettiar patriarch. Well-wishers handed us banana-leaf bowls filled with salty snacks. Children asked to have their pictures taken with us. It was a relief to be on solid ground, after the jolting ox-cart ride, and a pleasure to meet clan diaspora visiting from the United States and Europe. 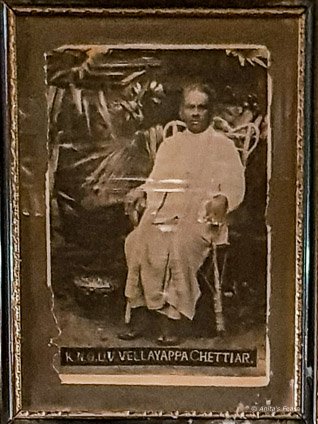 Next up, we visited the ancestral home of our host for a private tour. Like other mansions in Chettinad, the house had been built in the early 20th century by his forebears, showcasing fortunes made working for the East India Company in Southeast Asia. The stately home, partially restored, features Burma teak, Italian (and Portuguese!) marble, and a mix of early 20th century European architecture and interior design. The patriarch’s pride in his family heritage was palpable and endearing, his welcome gracious.

As the sun set, we sat in lawn chairs with bowls of pongal and watched the performance of a young dance troupe (Ganesh was surprised and delighted to find his niece among the dancers!). The program concluded with greetings from local dignitaries, who also presented certificates to the dancers and musicians. After an afternoon of immersion into a Tamil Nadu festival tradition—and way too much pongal!—it was time to head for Karaikudi, and settle into The Bangala, one of the best hotels of our entire trip.

Pongal is celebrated at the same time every year, at the start of the Tamil month, Thai. It always commences on January 13 or 14. tripsavvy has useful background information for anyone wanting to know more about the traditions of Pongal.

We planned our trip to India with the folks at India Someday, and especially appreciated their recommendations for making the most of our time in Tamil Nadu. Independent travel in India can get complicated, and we found their help to be invaluable!

Siren Call of the Luberon: Finding Bliss in Provence on a Luxury Tour gettingontravel.com/luberon/