One of India’s most distinctive art forms is that of rangoli, in which patterns are created on the floor or the ground using materials such as colored rice powder, dry flour, colored sand or flower petals. Tom and I saw numerous rangoli throughout India. They feature during the various Hindu festivals, and often follows designs passed from one generation to the next and is traditionally done by girls or women. Kolam, as the art form is known in South India, can be seen in towns and temple squares all over Tamil Nadu. Kolams adorn homes and businesses for special occasions, such as festivals, auspicious observances, and marriages. Tom and I were especially enchanted with the kolams created to celebrate the Pongal harvest festival in Tamil Nadu.

What is a kolam?

The kolam is a symbol of an open heart and an auspicious welcome, as well as a colorful, devotional presence. In rural Tamil Nadu, women draw kolams as an enticement to prosperity for their homes and businesses. Beautiful as they may be, though, kolams are more than designs; they also invite life into one’s home, whether birds, ants, or even human guests. And they are a sign of invitation to Lakshmi, the Hindu goddess of prosperity and wealth.

Many kolam designs are derived from magical or religious motifs. Fish, birds, and animal images or zodiac symbols may also be used. The closed shapes created in the making of a kolam also symbolically prevent evil spirits from entering the shapes, or the home. Nowadays, the designs can be found online, as well, on social media sites. Kolam artists are making the art form a key element of South India’s contemporary art scene.

How is a kolam made? 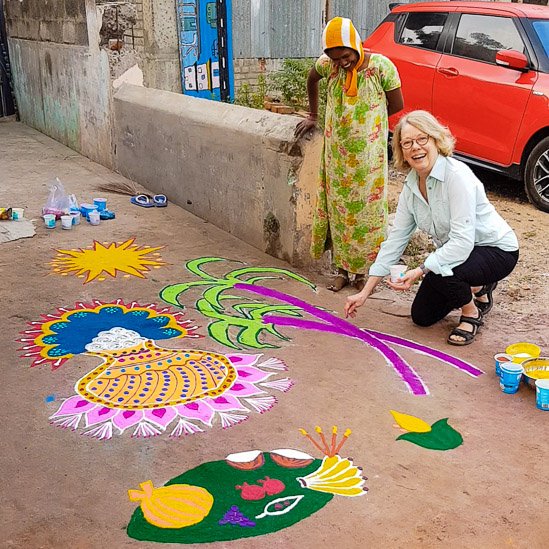 Traditionally, kolams were drawn with coarse rice flour. Today, they are often drawn with powdered limestone, red soil or chalk. In some regions salt, turmeric powder, flowers, rocks, stones and sawdust are also used. Brightly colored store-bought artificial chalk powder enables women to include vivid magentas, emerald greens, turquoise and cobalt blues in the designs. Many of the kolams we saw were every bit as colorful as those we experienced during the Holi festival in Mumbai a few years ago.

The floor of the house, or the ground in front of the dwelling, is first cleaned with water and swept to prepare the surface. Many kolams begin as a grid pattern of dots, around which curved loops form a geometrical line drawing. Others are representational, free-hand drawings.

Tom and I were delighted to have an impromptu opportunity to try our hand at kolam-making early one morning in Mahabalipuram. The ladies of the house were out in force, painting a dramatic design for Surya Pongal. They kindly handed me a cup of magenta chalk and asked if I wanted to help fill in a sugarcane stalk motif. I managed to “paint inside the lines” but just barely. They were surely relieved when I finished my simple task, and they could get on with the grand design.

We saw kolams across Tamil Nadu, from Chennai to Madurai. Perhaps the largest display of the designs in one place was in Nattarasankottai, at a Chettiar clan reunion and Pongal celebration. There, hundreds of families gathered to make merry—and celebrate Pongal together—on a beautifully decorated temple square, with a numbered place for every family’s cooking pot.

The delights of Portugal