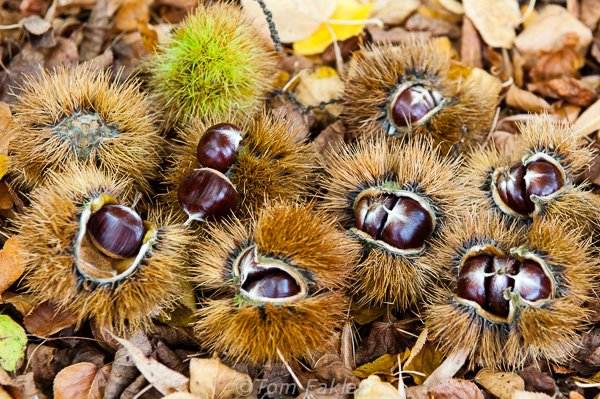 I love one-trick food festivals. They bring out my penchant for taking a single food ingredient to levels I would never envision on my own. Take chestnuts. They are sold freshly roasted, in little packets, on Old Town street corners all over Switzerland. I enjoy munching on still-warm chestnuts while strolling around wintry streets. But it took a festival devoted to all things chestnut—a one-day sweep of the annual fair in Ascona, Switzerland in canton Ticino—to broaden my horizons. 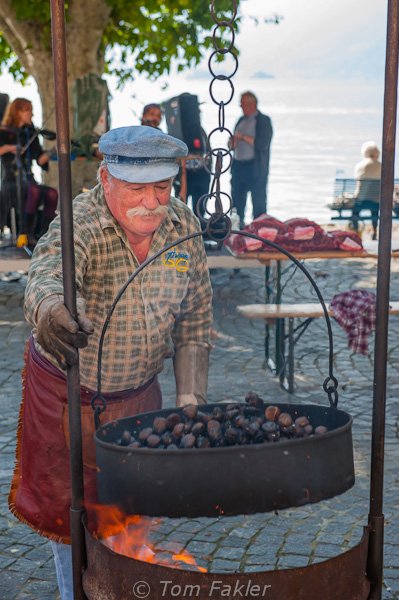 In Ascona, more than 2,000 kilograms of chestnuts are roasted for festival visitors, and we enjoyed watching the marionatts at work, then tasting the results. We visited stands selling various chestnut-based delicacies such as jams, honeys and cakes. We found vendors of traditional foods, beer, and splendid Ticino wine to be generous with their samples. In the afternoon, we had servings of polenta with our choice of mortadella or gorgonzola, and watched lively concerts along the lake shore.

Ascona’s fair, Sagra delle Castagne, offers all things chestnut, from pastas to beer, to jams and marmalade, to desserts like vermicelli, or simply roasted—and all accompanied by strolling brass bands and folk music.

A mainstay of cucina povera

For centuries the chestnut was a primary source of nutrition in the mountainous areas of the Mediterranean, where grains did not grow well. The Romans cultivated chestnut trees in the Alps. Well into the nineteenth century, chestnuts were the mainstay of a diet for an impoverished rural population. Nowadays, its traditional uses are on show for tourists, along with fancier preparations.

The chestnut: healthy and tasty

“Once a vital food source in remote Ticino valleys, today sweet chestnuts are the ultimate autumnal snack…packed full of vitamins and with a high carbohydrate content, while being only 2% fat.”

This proclamation from Swiss Tourism’s Autumn 2019 promotional brochure is a healthful invitation to head for Ticino in a beautiful time of year, and include a chestnut festival in a Swiss travel itinerary. For me, though, a more compelling reason to sample chestnut specialties is the distinctive flavors of chestnut pasta, honey and cookies.

At the friendly stand of tigusto SA, a “bio” firm that sells La Pinca chestnut products, I bought cookies made with a recipe from Hildegard von Bingen, one of my saintly heroes. She was elevated to “Doctor of the Church” by Pope Benedict, but I admire her for her forward-thinking medical and pharmacological practices.

September and October are splendid months for travel in Switzerland, and there are many reasons to visit Ascona. The chestnut festival is one of a number of gastronomical events around Ticino in Autumn. Since 1999, the Autunno Gastronomico of Lago Maggiore has provided an annual, almost month-long opportunity for sampling the seasonal dishes of Ascona-Locarno.

Chefs of Ticino’s grotti prepare traditional specialties, from game dishes and cold-weather vegetable preparations seasoned with mountain herbs, to desserts such as chestnut tarts with cinnamon ice cream, all using locally sourced ingredients. For three delicious weeks, more than 50 restaurants in the hills and valleys around Lago Maggiore offer their best seasonal dishes, making Autumn a marvelous time to sample the best flavors of Ticino.