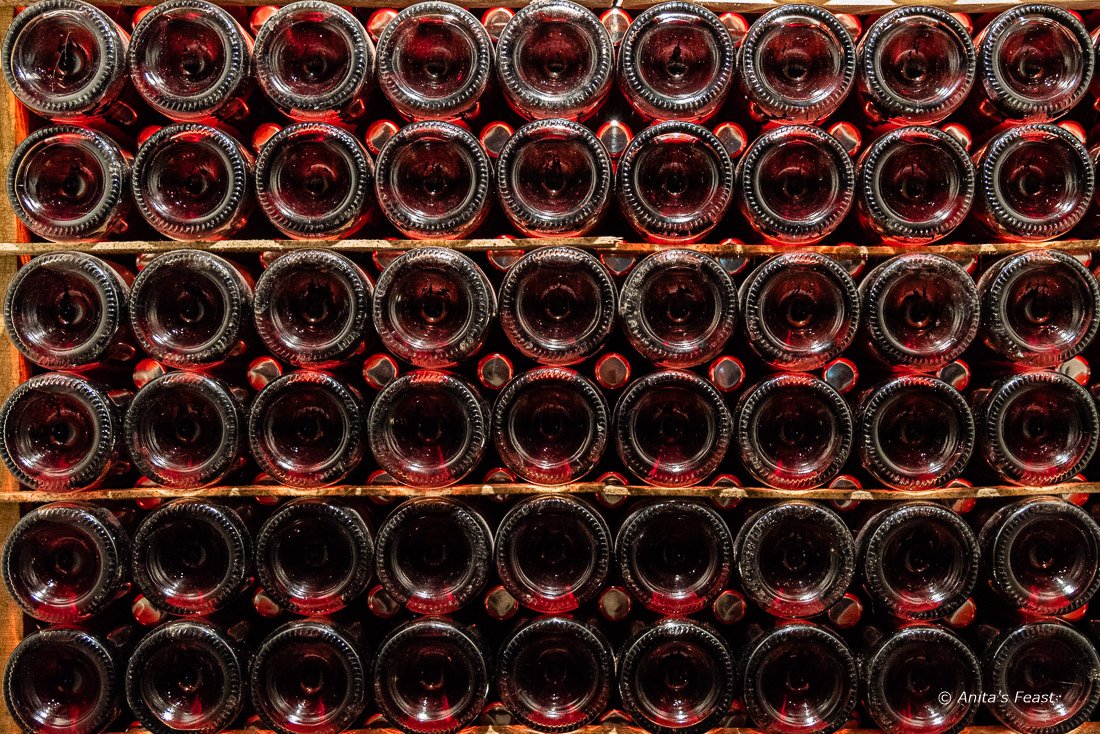 When we were invited to visit the Sbaffi winery near Fabriano, Italy, Tom and I knew only that the winery produces a range of sparkling wine in very limited quantities, and that their wines have a story to tell. We would soon learn that the boutique operation in central Le Marche is the result of one family’s passion for agriculture, for wine, and for making music(!). These days, three Sbaffi brothers—all classically trained musicians as well as agricultural experts—are the fourth-generation winemakers here, making wine for themselves and connoisseurs. Francesco and Lorenzo were our lively hosts on our day trip from Sassoferrato. 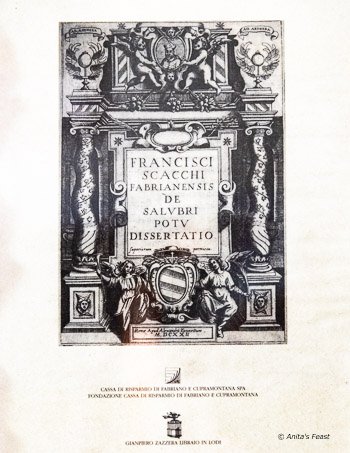 In 1622, the Fabriano physician Francesco Scacchi published “De salubri potu dissertatio“, a treatise on the correct way to drink water, tea and wine, and the effect these have on the body. He devoted a chapter of his book to sparkling wine, describing in detail the method to add sparkle and froth to normal wines with the addition of grape must in a second fermentation. Scacchi called the resulting sparkling wine “spicy” and “useful to health” in moderation.

The method of sparkling winemaking known as Méthode Champenoise in France and the traditional or classic method everywhere else, generally involves the blending of base wines into a final sparkling wine blend. After yeast and sugar are added to begin a second fermentation, the wine then ages inside the bottle for up to three years or so. For a look at how sparkling wine is made, see what Madeline Puckette of Wine Folly has to say. She makes no mention of the Fabriano physician or the use of grape must instead of industrial sugars, but the processes for traditional and five other methods are well illustrated.

Centuries on, in the early 2000s, Francesco Sbaffi and historian Alvise Manni rediscovered Scacchi’s treatise. The Sbaffis revived the recipe and in 2007 began to produce their wines using what Francesco “the Scacchi Method”, adding grape must instead of industrial sugar for bottle fermentation. They brought their first bottles to market in 2011. The winery currently produces 2,000 bottles per year, and plan to increase production with the grapes from a new vineyard.

With the Scacchi Method, the winemakers aim to bring out the fragrance and intensity of varietals. As it happened, their use of a medieval winemaker’s recipe coincided with another family passion: reviving heritage grape varieties. After the upheaval in European viticulture with the arrival of phylloxera and other diseases in the nineteenth century, cultivation of many grape varieties was abandoned, and many of them disappeared.

A century later, interest turned to recovering these ancient vines, and along with it, rediscovering flavors otherwise destined to be lost. As wine growers, the Sbaffi brothers use the buds from genetically ancient plants, benefitting from the original DNA. They are participants in regional efforts to revive the Vernaccia Cerretana grape, for example, with the first harvest of this variety in 2019.

“Each year can tell you something different!”

The Sbaffis do not produce wine to a specific standard by blending. Instead their philosophy of vintage production entails working with each grape variety, each year, to produce unique and memorable wines. They have also extended the period of fermentation in bottle to four years, with the aim of increasing the wines’ intensity. Sbaffi winery is on Wandering Italy’s list of six must-visit Italian wineries and now we know why! Call ahead to schedule a winery visit.

The wines we tasted in Fabriano

We first tasted Petrignone 2016, a new offering coming to market this year. Crafted from an ancient, almost extinct indigenous grape variety, Sbaffi Petrignone is aromatic, with very small bubbles and an effervescence that is delicate and soft. Our second wine was a Castellare bianco 2013, made with chardonnay grapes that had been “sleeping with yeast for more than four years.”  We finished with the winery’s signature product, Castellare Rosé, produced using Sangiovese and Cabernet Sauvignon grape varieties. The rosé has a spicy aroma and is slightly bitter on the palate. Deeply hued, it is especially good with Ciaúscolo, a sausage from Fabriano. We enjoyed them all, but the new Petrignone was especially intriguing!

The power of music

In 2016, powerful earthquake hit nearby Umbria near Norcia, the birthplace of San Benedetto and the starting point of the Cammino di San Benedetto. In response, the Camerata Musicale del Gentile of Fabriano created LiricoStruiamo, a musical collective, to take live opera performances to the devastated mountain towns, with Lorenzo Sbaffi as director. The initiative has been a rousing success!

For three summers now, the itinerant company—all volunteers—have traveling the Apennines along the seismic fault in refurbished vintage vehicles, delighting residents of numerous towns with open-air concerts. “Our aim,” Lorenzo says, “is to spread a feeling of hope and rebirth through music.”

Thank you, Francesco and Lorenzo, for sharing your beautiful wines and stories with us! And a big thank you to Rita Sacco for introducing us, and to James Martin of Wandering Italy and Martha Bakerjan of Martha’s Italy for sharing our travels in Le Marche.