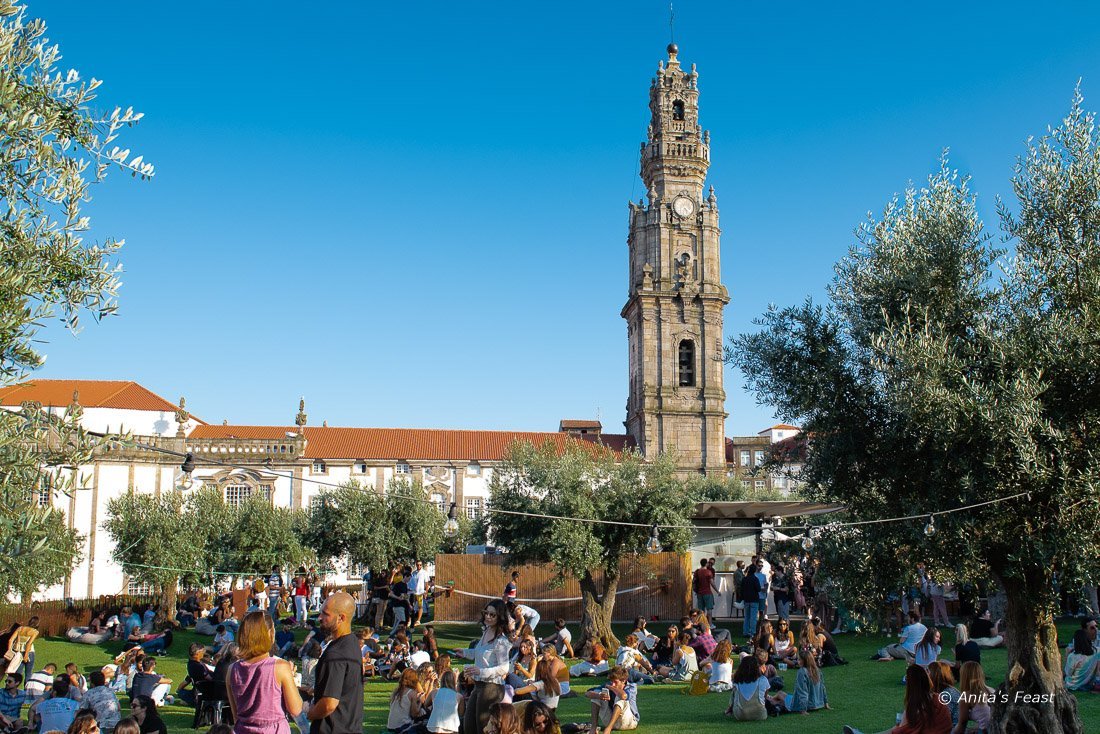 Clérigos Tower: Two hundred forty steps to the top…and a classy backdrop to relaxation on the lawn of Jardim das Oliveiras, in the heart of Porto’s Baixa district. The lush green space over the shops of Passeio dos Clérigos is a happening place on summer afternoons. A few days ago, Tom and I passed this way, mid-way in a tour featuring “The story of Portugal in 5 glasses”.

The three-hour tour was a light-hearted stroll through highlights of Portugal’s eventful history, experienced through the lens of coffee, tea, beer and wines, both still and fortified. Our guide was William Owen, a passionate free spirit in love with Portugal. He served up stories as we sipped, quaffed, and toasted summer in atmospheric cafes around the neighborhood. Afterward, we hopped the Metro to theLAB by Catavino, an events and art space near Praça do Marquês de Pombal, where the story of Portugal continued. 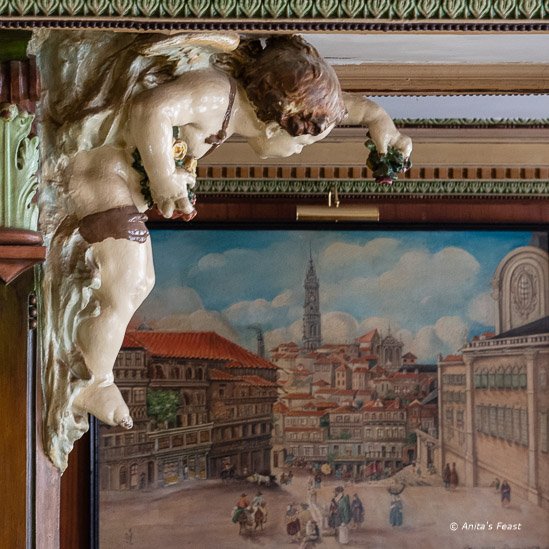 The Age of Discovery, the Portuguese empire, and kings brought wealth to Porto and left a legacy of architecture and early Renaissance gentrification. Global trade, powered for several centuries by Portuguese exploration and political horse-trading among the ruling classes in Europe, moved exotic goods—tea, coffee, and Douro wine—across borders and seas. Our 5 glasses walk took us along some of the best- and least-known of these trails as we walked Baixa’s cobbled streets and dipped into crannies of downtown Porto new to us.

From our early days of exploring new travel destinations with a culinary tour, Tom and I have thrilled to learn about beverages that evoke place as a companion to food. Whether boza or salep on food walks in Istanbul, Turkey, tarragon soda pop and orange wine while exploring Tblisi, Georgia, or coffee and wine in Malaga, Spain, the food experiences have always been enriched with local beverages. Our walk with Catavino placed beverages front and center, enlivened with Portugal’s fascinating history.

A cup of coffee & a spot of tea 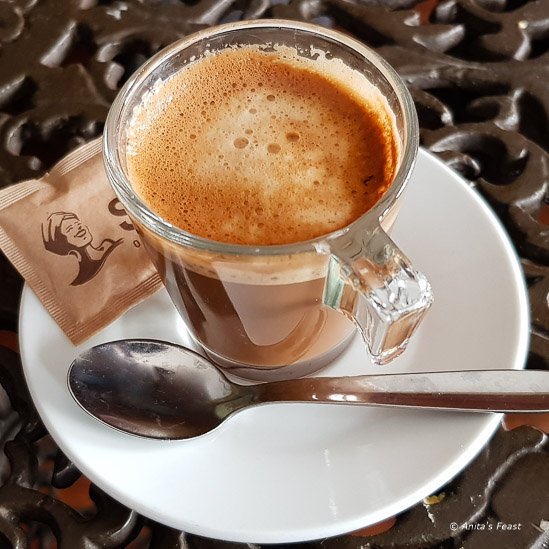 We discussed the delightful subject of coffee in Portugal over—what else—cups of coffee at a family-owned café near Praça de Almeida Garrett and Porto’s São Bento Station, with its famous tiled entrance hall. The art on the café’s ceiling and walls pre-dates the coffee and pastry service that began here eighty years ago. Barista William was eager to discuss with us why Portuguese coffee is so good, and offered insights from his experience living in Brazil, the world’s top coffee-producing country.

Later, we stopped for tea at one of Porto’s top gathering places from the first quarter of the last century down until the present day. Portugal played an important role in adding tea, and specifically afternoon tea, to the food culture of England and the British empire. But Catherine of Bragança’s participation in this bit of history is just part of the lore. As we sampled teas—green, black, and infusion—we learned of several linguistic and culinary connections that make tea in Portugal a fascinating story.

A glass of beer

“It takes a lot of beer to make a little wine”

For many Tripeiros, as inhabitants of Porto call themselves, beer is a lively social companion. While not a Portuguese original, beer is popular here for afternoons grilling at the beach, for watching football matches with friends, or taking in summer sunsets from one of the many vantage points around town. Catavino’s glass of beer aims to introduce craft brewing, a lively and recent addition to Porto’s culinary scene. There is plenty to know about this age-old occupation of turning hops and water into a froth-topped drink that is filling, low in alcohol, and convivial.

A glass (or two) of wine 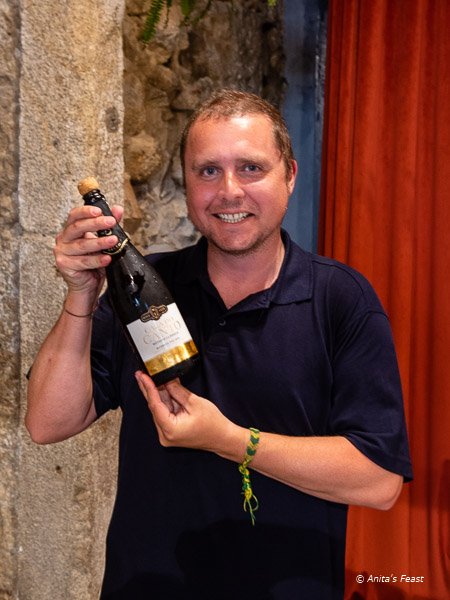 Perhaps not surprisingly, wine got the lion’s share of our attention on this tour, both out and about in town, and on our final stop at theLAB. With William, we mused about medieval Portugal over glasses of sparkling wine (Portuguese, of course), visiting the stately 16th century building that originally housed the city’s first hospital. Hidden behind more recent structures, the building was recently beautifully restored with great attention to detail.

The setting—now a boutique ‘concept store’—was fitting for sampling a chilled glass of bubbly from Bairrada. The wine produced in proximity to the sea was a delectable aperitif.

For Tom and me, the champagne styled wine from Casa do Canto had the freshness typical of the region, but also evoked pleasant memories of Alsatian Crémant we enjoyed during our years in Switzerland. For William, it was an opportunity to introduce a wine region that is still little known to many visitors.

At theLAB, we spent an hour with Ryan Opaz, co-founder and CEO of Catavino, and sampled several exemplars of Douro wine-making prowess. Ryan, a passionate leader of luxury food-and-wine tours in both Portugal and Spain, is also a Knight of the Confraria do Vinho do Porto (Port Wine Brotherhood). His goal in pouring a white wine, a red wine, and a late-bottle vintage (LBV) port was to let us experience the characteristics of each. Along the way, he helped us understand how each wine came to be the wine in our glasses.

A light white, a Douro red, and an LBV…and vermouth

A glass of Quinta da Palmarinha Loureiro from biodynamic vineyards near Amarante would come as a welcome surprise to anyone whose knowledge of Vinho Verde wines is limited to the slightly spritzy versions on the mass market. Manual harvesting, a gentle press and spontaneous fermentation come together to produce a natural wine that is crisp, dry, and with a pleasing minerality.  Next up: a wine from the Douro Superior, at the valley’s farthest reaches, near the Spanish border. The still red, a 2014 Gradual from Quinta da Costa do Pinhão was light but fruity and low in tannins (“pingy and persistent”, says The Wine Detective). It was the perfect precursor to our third sample, an LBV from Maynard’s with ripe fruit flavors, dark chocolate and black pepper tannins. After we had had a swirl, a sniff and a taste of the LBV, Ryan invited us to try it with dark chocolate, and note the difference. The LBV was richly flavored either way, but the chocolate added something special to the experience.

Our time with Ryan ended with a delicious surprise: our first taste of Poças Wines’s just-issued Soberbo Vermouth. Produced from a remastered recipe featuring white port and white still wine, the aperitif gets its lively herbal bouquet and flavors from botanicals, all sourced from Poças vineyards.

The beverage tour was a lively complement to more food-intensive explorations of Porto and Portugal’s culinary delights. It was also a teaser to the in-depth experiences offered by Catavino Tours and a delightful way to experience one of Porto’s newest cultural spaces. theLAB offers wine workshops, tastings and events, and its small shop featuring organic and biodynamic wines from the Douro and other wine regions of Portugal.

Thank you, William and Ryan, for taking us to places in Porto that we have not previously experienced, and for sharing your expertise and Portugal stories in such a delightful way!

Tasting the Colheitas of Graham’s