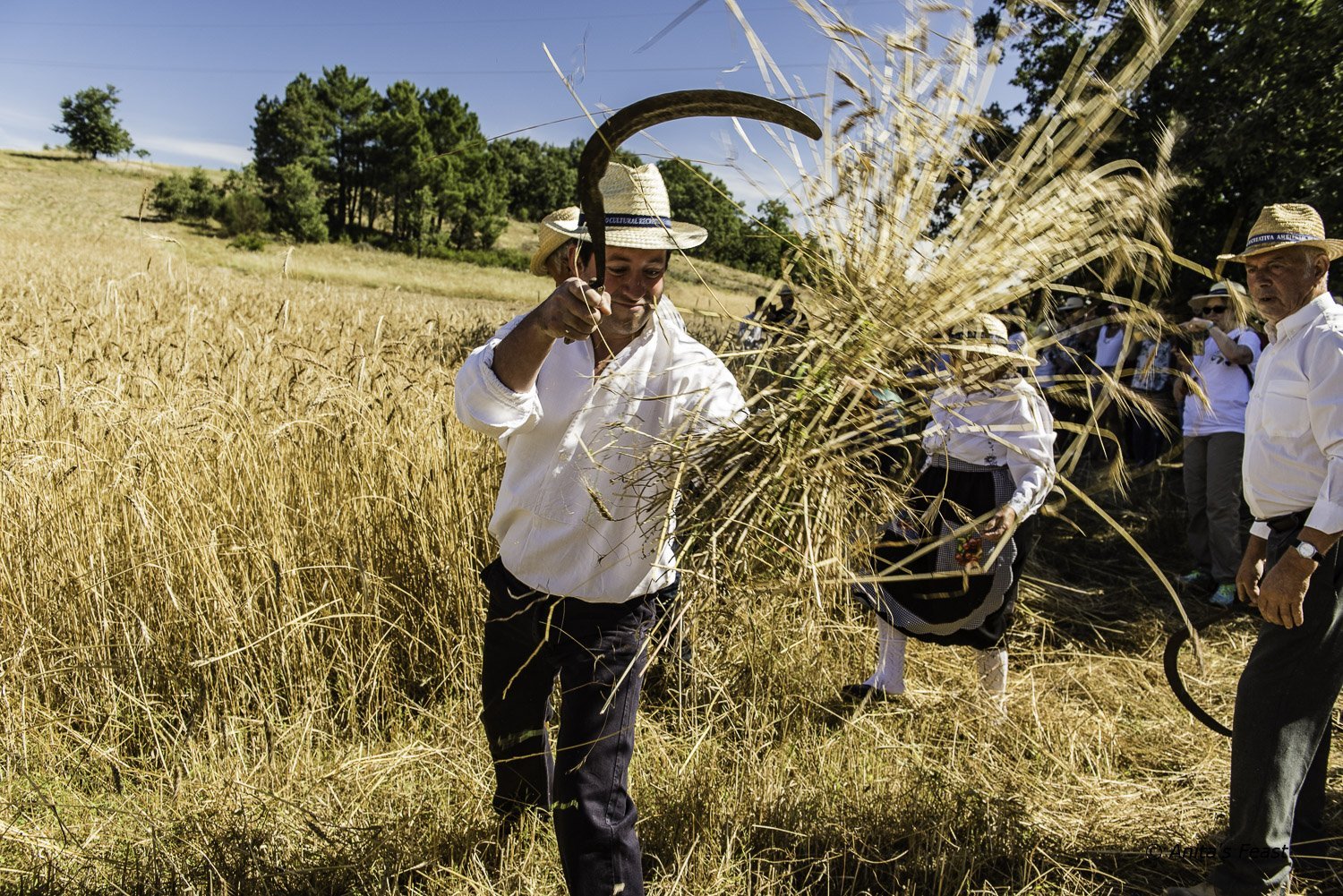 “Keep rolling the dough!” Guilhermina exclaimed. “Faster, in a circle like this,“ she said, leaning over the wooden trough to demonstrate. She paused, wiped her forehead with the hem of her apron, and looked around the room “Don’t stop until the water is absorbed!” We were in hour five of the 20th annual LOMBADA Festival of Music and Traditions in Palacios, a few kilometers from Bragança, capital of Portugal’s Trás-os-Montes region. The festival celebrates the region’s gastronomy, traditional costumes, music, dances, and agriculture—and the reason Tom and I were here—a surprising culinary tradition, making cuscos, by hand. First, though, we had to harvest the wheat.

Tom and I were intrigued that cuscos—known to most of us as couscous, a North African staple—is a Portuguese tradition as well. Was this a legacy of the Moors, who invaded the Iberian peninsula in the 8th century? a local adaptation in a region without rice, using flour from locally available wheat species? According to Patricia Cordeiro, a sociologist pressing for inclusion of cuscos in Portugal’s National Inventory of Intangible Cultural Heritage, it is probably both. The Moors never permanently subdued northern Portugal, and although there are few architectural remnants of their domination hereabouts, cuscos could well be their gastronomic legacy.

For today’s event, the harvest is done the old-fashioned way, with scythes, at least to start. Townspeople, many of them in traditional dress, gather in the morning to follow an ox-cart from the village to the fields. There, to the accompaniment of music and scheduled breaks for refreshment, they re-enact a harvest ritual that pre-dates Portugal as a country. Work breaks are a tradition unto themselves: wine-soaked bread, sliced meat and cheese, and local wine to fuel singing and dancing before it’s time to return to the field.

Unlike couscous elsewhere, the tradition in the Portuguese version is hand-rolling the semolina flour with water, as well as finishing the pasta-like result as a dish to accompany a meal. The mixing and rolling is a labor-intensive activity, an hour of rhythmically developing the gluten, adding water, and rolling the bits some more. When this was done, it was time to steam the cuscos in a big pot over a wood fire, then empty the pot onto a table outside for the contents to dry in the sun. The sealed pot recalled our time in a farm kitchen in Morocco’s Atlas Mountains, except that that time, our host was steaming dried semolina grains for a traditional Friday couscous meal.

In demonstrating how to make cuscos, Guilhermina Lopes is carrying on a family tradition, one that is still practiced by a few families in the Bragança district. Want to see for yourself how it is done? Scroll to the bottom of this article in Visão Sete to watch a video (8:55) featuring Guilhermina, her mother and aunt making cuscus in their home in 2016.

After the workshop, we had an opportunity to try several local dishes incorporating cuscos at a post-workshop dinner in Bragança. At his family-owned Restaurante Rota dos Sabores in the municipal market. Chef Eurico Castro presented us with four different preparations, including a fish dish and a cuscos-based dessert. I came to the meal with a new appreciation for a wheat staple I’d previously tasted only as a base for Moroccan meals. Here in Bragança, the cuscos was an effective carrier for a range of flavorful sauces, local specialties worth trying!

Cuscos is on the winter menus of a number of local restaurants, including A Tasca do Zé Tuga, which under Chef Luís Portugal recently received Michelin’s Bib Gourmand award. The restaurant, located inside the wall of the old castle of Bragança, is an atmospheric setting for sampling many regional specialties. 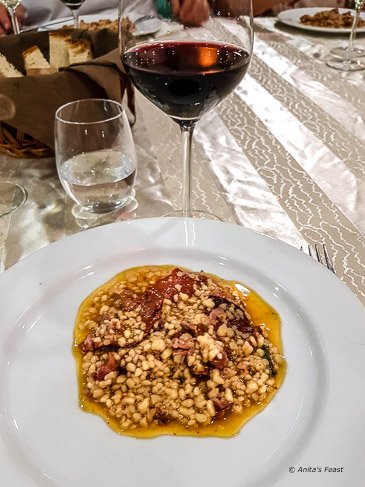 The foods of Trás-os-Montes are simple and hearty: lots of meat (mostly pork products, such as smoked sausages), bean stews, and in winter, cuscos!

From 1-3 March 2019, the Festival of Butelo and Casulas in Bragança will showcase the foods of the region. The star of the show is the pig, especially in its incarnation as butelo, a heavily smoked offal sausage wrapped around the bladder, or bucho.  It is customary to eat this dish on Saturday of Carnival, accompanied by casulas or chasubles, a dish of dried bean pods. Other dishes and plenty of good wine, will also be on offer.

Supporting players in the gastronomic festival include homemade bread, wine, and olive oil from the region, olive oil. 25 Bragança restaurants will participate in the festival, so this will be a great time for curious travelers to sample the full spectrum of hearty regional fare.

Sampling the culinary backstreets of Tbilisi

Comfort me with apples