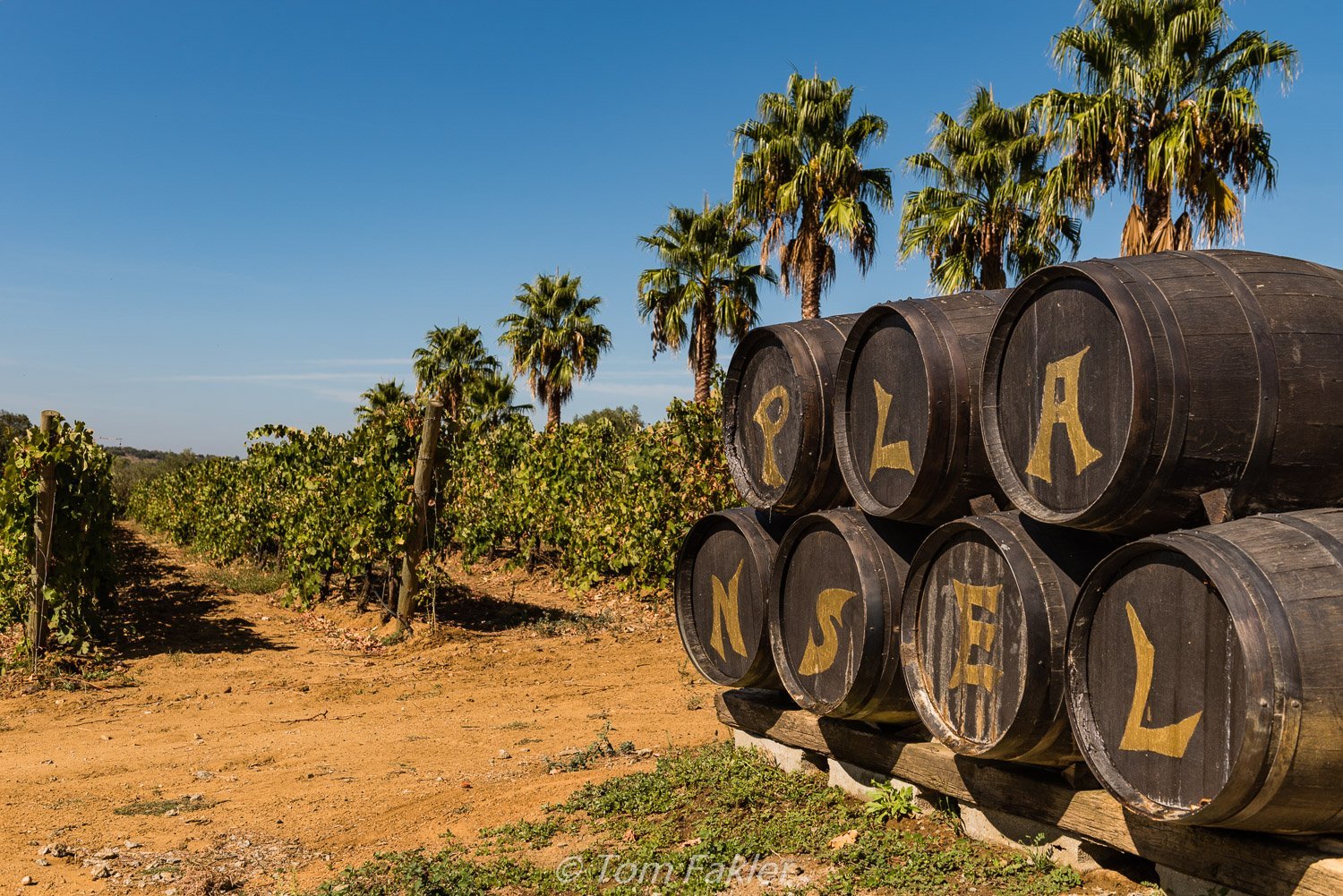 Tom and I met winemaker Dorina Lindemann at Essência do Vinho, at the Portugal Wine Connection in the Palacio de Bolsa’s magnificent Salon Arab. Huddled over a cocktail table in our coats, we heard about her father, a German wine importer, who had with his horticultural expertise, transformed Portugal’s viticulture over the several decades. We heard about award-winning wines from Quinta da Plansel and were invited to Alentejo to see them being made. In late September, we made a dash for Montemor-o-Novo and a flash visit to the Plansel vineyards and winery.

There, we found a winery run by an entrepreneurial family with long-standing connections to the wine trade and wine education in both Germany and Portugal. Art dotted the landscape and public spaces, and the place was bustling with visitors. We had a marvelous day, touring winery and vineyard, and best of all sampled several magnificent wines as they are meant to be enjoyed, with great food.

A passion for Portugal

German wine importer Hans-Jörg Böhm arrived in Portugal in 1961, when his yacht capsized in the port of Cascais, near Lisbon. While considering his next moves, he fell in love with Portugal and the possibilities for Portuguese grape varieties. Böhm began importing Portuguese wines into Germany and eventually moved permanently to Portugal. In 1975, just a year after the Carnation Revolution, Böhm established a commercial nursery and breeding program for Portugal’s native grapes. Technical papers, books on Iberian grapevine varieties and a couple of international viticultural conferences later, his work was rewarded with Portugal’s order of Comendador da Ordem de Mérito Agrícola (Commander of the Order of Merit for Agriculture). It was our treat to spend some time with him and see the varied plantings and an exceptional nursery of young vines.

Alentejo is a DOC region known for quality wine, its location framed by Spain to the east and the Atlantic Ocean to the west. Just a tiny portion of Alentejo is used for viticulture, but its high average temperatures and diverse soils produce elegant, modern wines. 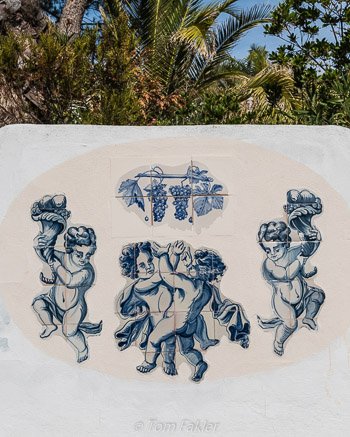 In 1997, Hans-Jörg Böhm’s daughter, Dorina Lindemann, moved to Portugal and began to make wine. Dorina, like her father before her, had fallen under the spell of Alentejo.  Quinta da Plansel produced its first wine under the Dorina Lindemann label in 1999 with just 2,000 bottles. It wasn’t long before Dorina introduced the making of single-varietal wines from indigenous grapevine varieties in Southern Portugal.  The estate’s wines, both blended and single-varietal—have been winning prizes and drawing visitors to Montemor-o-Novo ever since.

“Our winery production began with a women-only team but has since expanded to include a number of well-qualified men”, Dorina told us with a chuckle. Today the team includes both of her daughters, who are helping her position the winery for the future.

Sharing their expertise for cultivating Portuguese grapevines and developing world-class wines must be in the family DNA. A busload of school children arrived at the winery soon after we did, and other visitors came for winery tours while we were there. Dorina is a graduate of Germany’s prestigious Geisenheim University’s wine program and now teaches there part-time. Coming soon for Quinta da Plansel: WSET (Wine & Spirit Education Trust) training in the winery’s revamped events space.

Quinta da Plansel’s flagship brand is Plansel Selecta, named in honor of Hans-Jörg Böhm’s work propagating indigenous grapevines in Portugal. The winery produces blended whites, reds, and rosés to be sure. Dorina’s passion, however, is for single-varietals, based on the work of her father. In 2001, she chose Touriga Nacional to make a super-premium, single-varietal. Since then, both the Plansel Selecta and Dorina Lindemann labels have issued wines that celebrate and exploit the virtues of Portuguese grapes.

The grapes for the elegant Plansel Selecta CS Touriga Nacional 2015 came from a vineyard of 40-year vines and the wine derives its well-rounded flavors from twelve months in French oak. It won Best of Show Alentejano at the Mundus Vini Summer Tasting 2017.

Dorina served us a leg of lamb and cucumber salad with Plansel Selecta Reserva 2015, a blend of Argonez and Touriga Barroca, the wine’s flavors of dark cherries and a slight sweetness complementing the meat beautifully. This wine has been selected by Lufthansa Airlines to accompany its meals in business class.

The grapes for Dorina Lindemann, Limited edition Tinto 2014 are hand-picked, trodden by foot in small lagers, and hand-squeezed. A blend of Touriga Nacional and Touriga Franca, the wine is dark with tannins and evokes orange blossoms, licorice, spices, and herbs. Still young and acidic, it will reach optimum flavor in a couple of years. Lufthansa has chosen the 2014 vintage for its first-class cabins on long-haul flights, to be offered from 2020.

Food and wine at our Quinta da Plansel luncheon were exquisitely paired and the company delightful—I even got to practice a bit of German with other guests! Dorina’s passion for Portuguese grapes and wine was evident as she filled our glasses and explained each wine. It will be two long years until we open a bottle of that Limited edition Tinto 2014, but we know the wait will be worth it.

Our short stay in Montemor-o-Novo, a dot just off the highway from Lisbon to Evora, proved a fascinating detour. We had previously spent some time along the wine routes of Alentejo, visiting Évora and delighting to our first experience of the foodways of the region. Alentejo’s night skies are filled with stars, and our overnight stay in the countryside near Montemor-o-Novo offered breathtaking sky views to enjoy with a glass of wine.

From prehistoric monuments to rock paintings and a medieval castle ruin, Montemor-o-Novo has plenty to offer a traveler. The castle offers up remnants of medieval gates, sections of fortress walls and a Gothic bell tower. Several centuries ago, this was a place of empire: plans for Vasco da Gama’s voyage to India were drawn up here, and the 16th-century guardhouse bears the coat of arms of King Manuel I above the door. And just a few kilometers away, a Neolithic monument of standing stones broods in a hilltop clearing in a cork forest.

Quinta da Plansel welcomes visitors to the vineyards and winery. It’s a scenic, informative stop just off the main highway between Lisbon and Evora, and one well worth making.

Interested in the region’s blended wines, or just learning more about the diversity of wines produced in Alentejo? Take a look at James Martin’s overview of Alentejo Wines and Wine Route Tours on tripsavvy and develop your own tasting itinerary in the region.

Discover “the corklands” that define the landscape here, following the Route of the Cork Oak Forest and walking paths.

Explore the region’s prehistoric past, visiting the menhirs and dolmens that date back 5,000 years or more, or, just half an hour from Montemor-o-Novo, visit the stunning megalithic site of Almendres Cromlech.