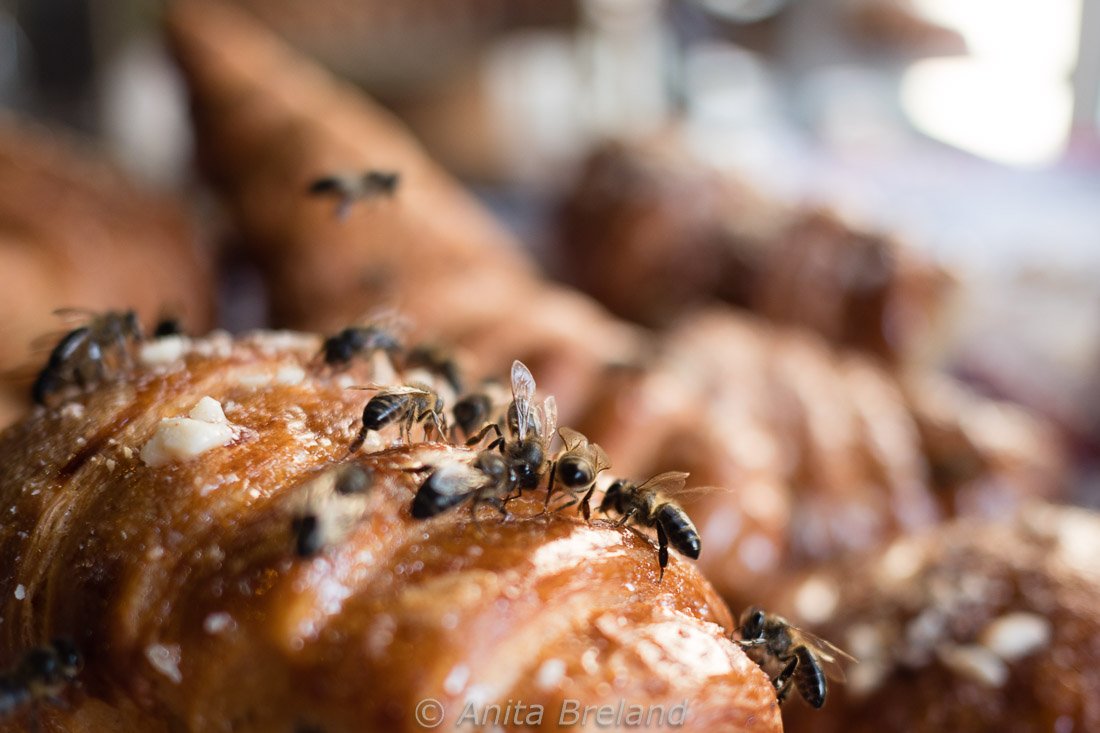 Morocco excels in sweet flavor notes. During a long absence from our house in Fez, I somehow forgot just how strong those notes can be. Since returning to Morocco a few weeks ago, my sweet tooth has had a workout, despite every effort to avoid a sugar overdose. It has been a refresher course in the country’s well-honed “art of the sweet”.

After a few days back in the medina, Tom and I began to ration Morocco’s famously sweet treats, choosing from among some—instead of all—of the country’s sugary categories. When we indulge, though, here are our sweets of choice.

An astonishing five sugar cubes come on the little tray with a morning coffee at our neighborhood café. Bees buzz around Moroccan croissants—they are stuffed with almond paste and drizzled with sugar syrup—but seem to be too sated to fight with human customers for their share of the treats on offer. There is a decided French influence in the pastries in local cafes, but the breakfast swarm is pure Morocco. And the five cubes never leave their little saucer, since the coffee is very good as is.

There are plenty of savory Moroccan street foods, but sweets sometimes seem to have the upper hand. We recommend trying these three at least once, on a foray through the Fez medina:

Sfinge, or Moroccan donuts, are made from unsweetened dough, fried then dipped in sugar. Fluffy with a crisp exterior, they are sold just-made in tiny shops and by walkaround vendors who carry them around strung on a palm frond.

Throughout the Fez medina, chabakia stands offer stacks of golden morsels that dazzle in their gloss of honey. Chebakia is made of dough that is rolled into the shape of a rose, deep fried, and glazed in a honey syrup, A traditional Ramadan treat, chebakia are a great accompaniment for savory harira, a delicious Moroccan soup of tomato, lentils, and chickpeas.

If all that honey isn’t enough, there are the triangle-shaped pastries called briouats—the sweet versions are filled with an almond filling and fried.

Coffee is not the only beverage that gets a big dose of sweet. Moroccan mint tea comes to the table well sugared unless you ask the waiter to tone it down. The sweet sensation doesn’t stop at the tea glass, though. All manner of cookies and cakes some in sweet format, as well.

Crescent-shaped gazelle’s horns (actually “ankles”) are filled with an almond paste and flavored with cinnamon and orange water. Ghriba, sometimes called Moroccan macaroons, come in many styles and flavors. “Cracked” on the outside, chewy on the inside, they pile on flavors of sesame, ginger, almond, and coconut. Fekka are Moroccan-styled biscotti. My favorite versions of these twice-baked cookies are flavored with sesame seeds and orange flower water. Moroccan cakes called meskouta provide a slightly less sweet teatime option. They are lightly flavored with orange or lemon, and often made with yogurt and dusted with powdered sugar.

Moroccan pastries, cookies, and cakes are deliciously daunting, but they are not the only sweet option on offer. As a between meal snack or to end a filling Moroccan meal, dates, a dessert called sellou and sweetened fruit provide (somewhat) healthy alternatives.

Dates—soft and chewy—are sold everywhere and eaten just about any time. Plain or stuffed with almond paste or walnuts, dates are popular Moroccan snacks. They are also served alongside tea and before, during or after meals.

Sellou is an unbaked dessert with a grainy texture, very popular during Ramadan, as well as a nutrient-rich sweet given to women after childbirth. It is made of browned flour, ground toasted sesame seeds, ground fried almonds, powdered sugar, cinnamon and anise seeds.

Seasonal fruit is a naturally sweet way to end a meal. That said, watch out: fruit desserts in Morocco often come sweetened with sugar and enhanced with cinnamon.

A starry night in Germany