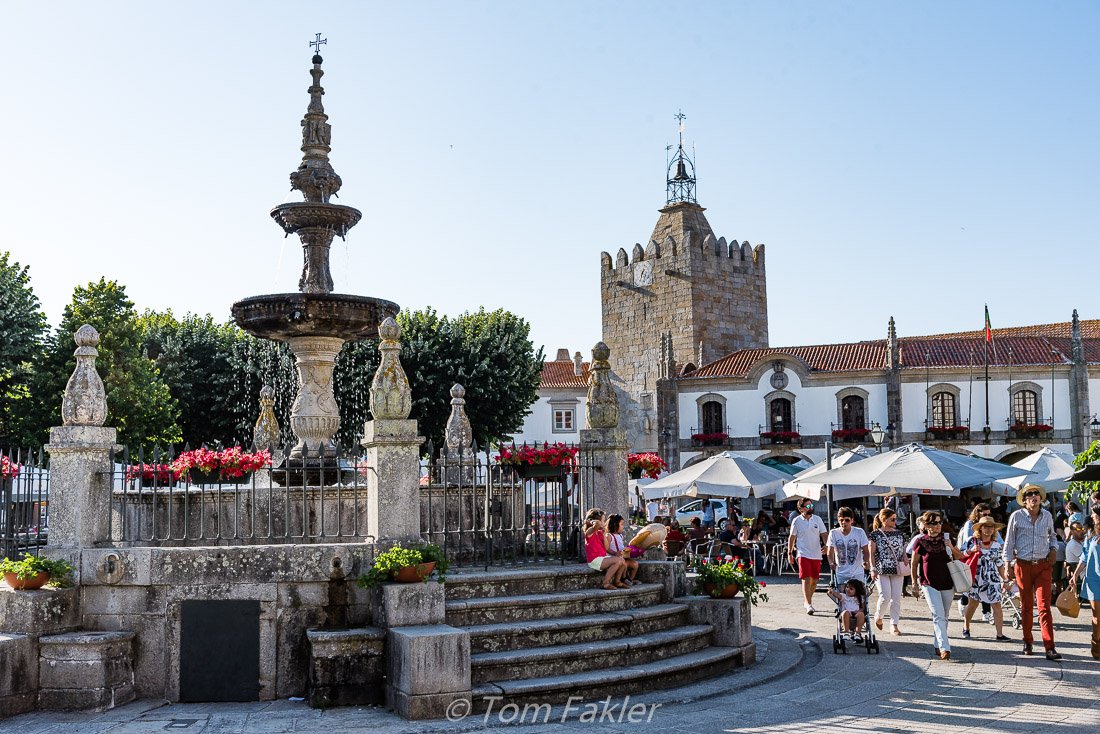 The Minho River traces Portugal’s northern border with Spain and empties into the Atlantic at Caminha, one of Portugal’s most charming beach towns. Equidistant from airports in Porto and Vigo, Spain, the little knob of land at the confluence of river and ocean is an ideal destination for a weekend getaway. Whether a weekend getaway or a stopover when road-tripping the Iberian Peninsula’s west coast, there is plenty to see and do around here, on both sides of the border! Tom and I recently visited the Minho borderlands and experienced the Portuguese side of the equation. Our base was Caminha, where the fortified walls between harbor and church in Caminha offer fine sunset views.  The people watching from cafes in the center of town is top-notch.

On our getaway, we had three very different culinary experience that were all Portuguese, all Minho. Our weekend covered all the basics: a restful, well-appointed hotel; great food and wine; and plenty to see when we wanted to get out and about. Take a look!

A charming place to stay 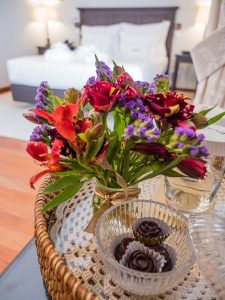 RinoTerra Minha Hotel, a boutique hotel on the outskirts of Caminha, was the centerpiece of our stay. We spent some time lounging by the by the pool and enjoyed the dishes of Chef Ana Guimarães. The hotel organized our excursion for a day on the Serra D´Arga, with a visit to Montaria to see the water mills and have a cooking lesson and picnic.

The hotel is remote enough to feel as though you’re truly on holiday; and near enough to Caminha and other attractions along the Minho to make you feel everything is accessible. Every room is different, some with a private terrace, others with a view of the Minho and mountain ridge across the river in Spain. RinoTerra has an on-site spa facility, with plans to enlarge it in time for the coming winter season

From the moment we entered our room, we felt catered for. There is even a ‘service button’ in the closet…we were encouraged to just “push the button” anytime we wanted a snack or tea, or wanted the concierge to schedule time in the spa (or a massage) or book an excursion.

RinoTerra turned out to be an ideal base for exploring the region: comfortable, hospitable and very accessible from Porto.

RinoTerra is known for its fine breakfasts: homemade yogurt and fresh juices, fine coffee, and a daily surprise from Chef Ana Guimarães. When we were there, one morning it was little pancakes with maple syrup and another, a cheesy ham roll. The hotel provides dinner service upon demand only, so we had to try it! A three-course meal from Ana’s kitchen featured an appetizer of eggplant Napolean and stuffed Portobello mushrooms, a main course of beef tournedos wrapped in bacon, fresh asparagus, and fancy potatoes; and for dessert, a fruit tart and vanilla ice cream.

A seafood dinner at Amândio Restaurante in Camhia hit the spot, partly because Tom and I both love seafood, but also because Amandio’s character-filled restaurant is a labor of love, fine cooking, and engagement with the arts. Our meal was a symphony of Portuguese flavors, from start to finish.

We began with a cold meat and cheese platter that showcased Bisaro pork, and seasonal fruit and local cheese drizzled with honey. Our main course was a delectable, shared pot of the house specialty, sea bass rice. For dessert, it was baked apples with ice cream. Wines included an Alvarinho Reserva from Monção; a Douro red that paired perfectly with the brothy sea bass; and little glasses of port and muscatel to cap the meal. Also on the menu: plenty of conversation with our host, who is quite a raconteur.

In the countryside, broa and a picnic 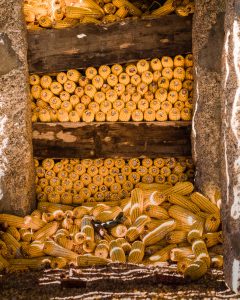 We spent the better part of a day with Descubra Minho, seeing some of the sights on Serra d’Arga: the tiny village of Montaria, with its village green and one remaining corn mill, and river lagoons on the forested mountainside.

I love broa. Unlike the cornbread I know from the southern US, it is made from a mixture of cornmeal and rye or wheat flour and leavened with yeast. It may not be exactly the cornbread I grew up with, but broa is highly satisfying.

To get us started, Carmen popped open an ancient trough for mixing the dough, draped me with an apron and put me to work. Soon I was tossing and sifting and mixing. Carmen kept up a steady banter of advice and caution as we worked the dough.

When it was ready to mound into a corner of the trough for a rest, she showed me how to score the loaf, accompanied by a prayer (!) for a fine loaf. After she had stoked the fire, Carmen helped me place the loaf just so on a base of fig leaves and load it into the oven with a large wooden paddle, similar to that used by a pizza maker. Then, we sealed it into the oven with mud she keeps on hand for just this purpose. Slightly more than an hour later, the bread was done and it was time for a picnic in Carmen’s garden.

Want to visit the Minho as we did on our weekend getaway? You can!

Here are the links:

Learn to make Portuguese cornbread the traditional way with Descubra Minha. For more about what to expect, read Julie Fox’s great description of her experience making broa in Carmen’s rustic kitchen.

Cooking Portuguese in a townhouse kitchen