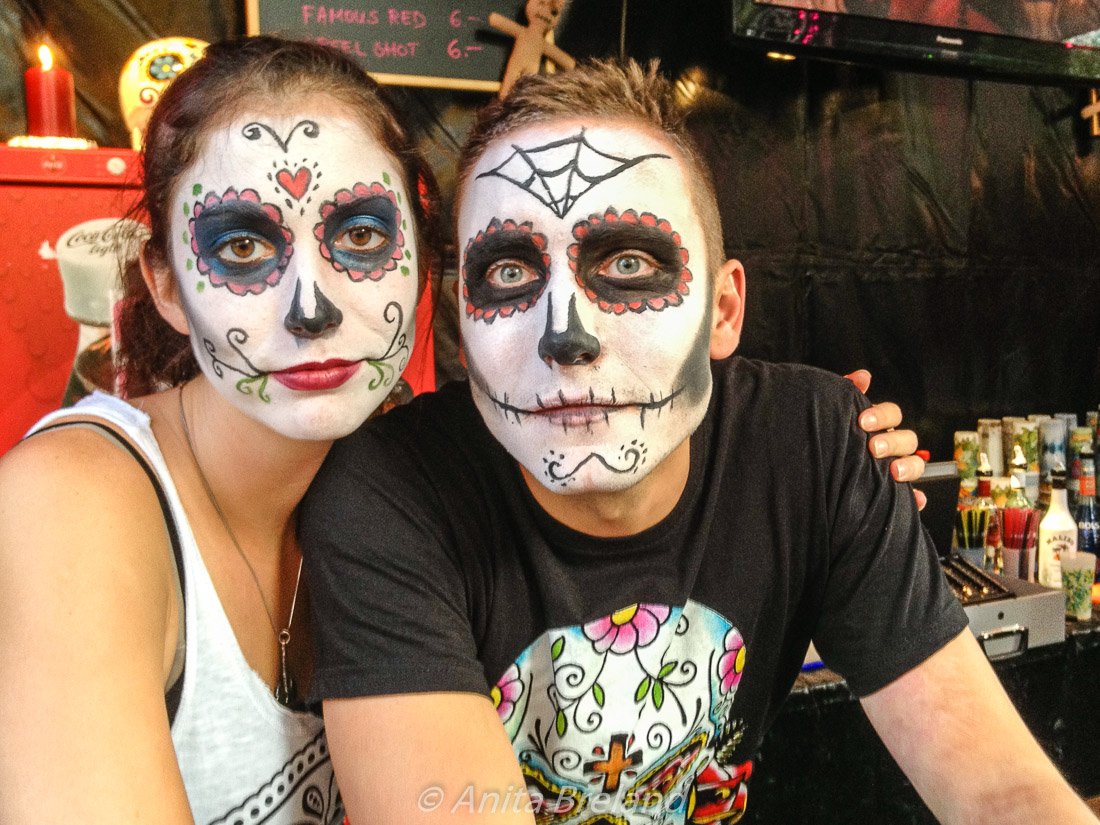 For more than three decades, the annual Klosterbergfest has been a “multiculti” late-summer ritual in Basel, Switzerland. The neighborhood culture party’s crowds circle the neighborhood around the city’s Elisabethankirche and Atlantis jazz club in what feels like a happy block party. Locals and visitors mingle and gather around when musicians take to the small stages set up in the middle of the action. There is a delightful mix of world languages as foods from Africa, Asia, and Latin America is served up. Face paint and costumes, and balloons for the kids are on display. These servers at the Voodoo Bar broke into grins as soon as I’d snapped a ‘serious’ portrait.

The festival is on, rain or shine. In late August, good weather and good vibes are generally the order of the day, with an occasional bluster of rain. Festival goers sample culinary treats to the accompaniment of spirited world music, jazz, and balloons. And everywhere, there is music: African vocal and instrumental, jazz. About the only instrument NOT in evidence, the times Tom and I have attended the festival, has been the Alphorn!

The backdrop for the Klosterbergfest is the Elisabethenkirche, one of the most significant neo-Gothic buildings in Switzerland. Children climb on the pyramids outside the church, surrounded by the white tents of crafts vendors from more than 25 countries.

As always for me, food’s the thing: from Tibetan momos to fish and rice from Gambia, there are exotic dishes aplenty to try. Long lines are guaranteed for Kerala-style prawn curry (toned down for Swiss palates) and Lebanese mezze. Swiss and Alsatian specialties are there, too, from raclette with potatoes to Flammkuchen and garlic bread. Potato chips, hand-sliced and freshly cooked, hit the salty spot, while crepe stands cater for the sweet tooth. There are juice and wine bars, ice cream stands, and Basel Ueli Beer on tap. At the foot of the Klosterberg, the Caipirinhas bar with its yellow flags is a popular meeting point. It’s hard to decide which of the irresistible aromas to follow to the source: Senegalese? Moroccan? Lebanese?

All proceeds from the Klosterbergfest go to direct support of needy children in Brazil. This local initiative engages cultures from around the globe and benefits a worthy cause half a world away.

‘The power of locals’

Klosterbergfest is an integral part of the Basel festival scene and a summertime tradition in a town that always has something going. Klosterberg 2017 celebrates the festival’s 40th edition.

Klosterbergfest: a great way to spend an August afternoon!