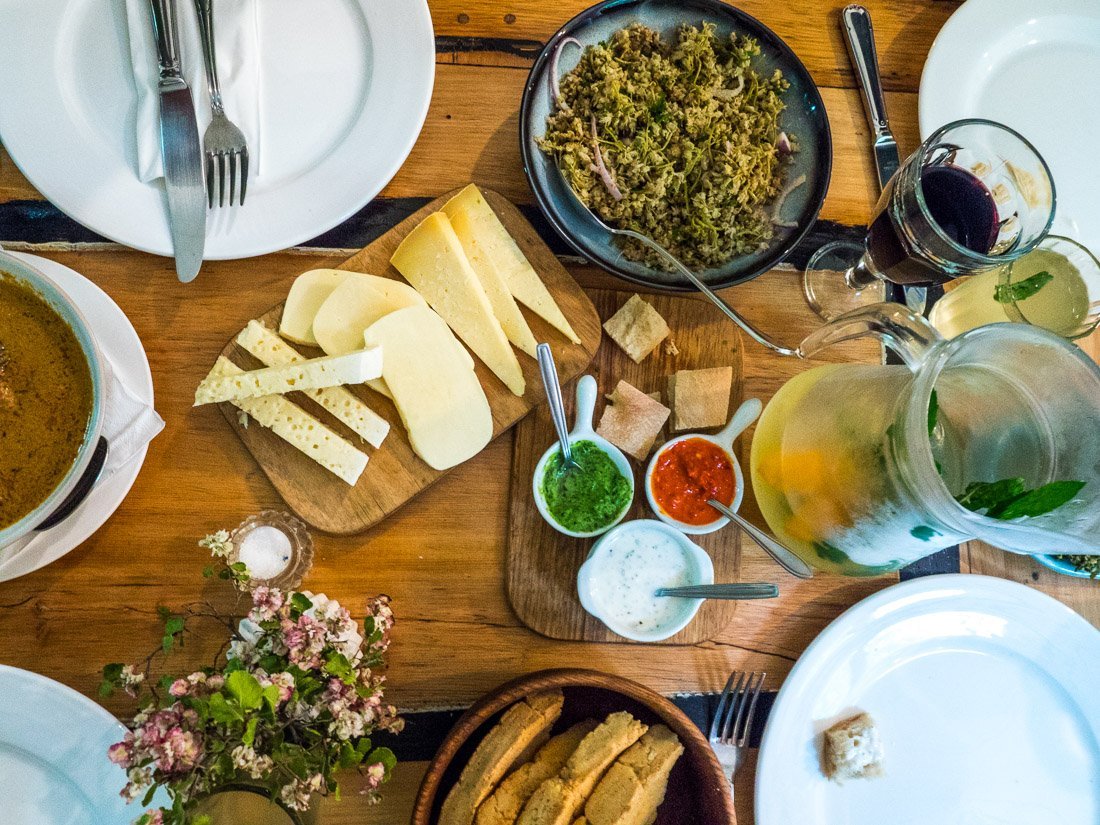 Tarragon soda pop? Pickled flower buds? Pomegranate “leather”? In the country of Georgia, the culinary darling of the Caucasus, the exotic jockeys with the familiar for a visitor’s attention. For travelers like me, some behind-the-scenes interpretation can be a great help to understanding local foodways. Last month, I joined a tour led by journalist Paul Rimple of Culinary Backstreets Tbilisi, in the delightful company of three fellow visitors to Tbilisi.

For Paul, the city is one big supra—that incomparable, heavy-laden Georgian spread of a special-occasion dinner table. To food-walk Tbilisi with him is to come away with some of his passion for the welcoming people and riveting flavors of Georgia. Nine hours (!) after we introduced ourselves over coffee, our little group parted company—culinary best buddies, ready to experience Georgia on its own terms. 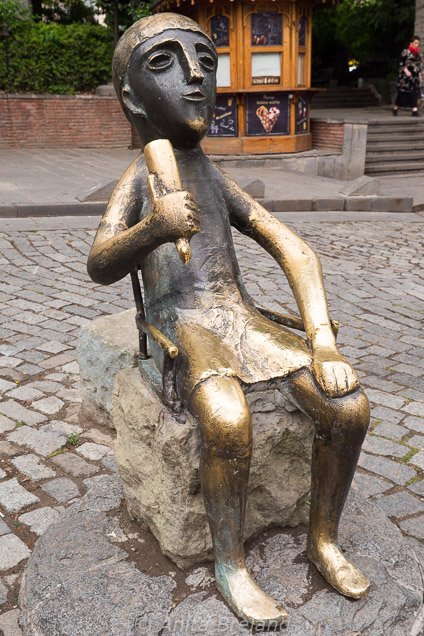 We began with an espresso at a café across from a bronze statue called Tamada. The figure is copied from a pre-Christian statuette that pays homage to the toastmaster at Georgian feasts.

“It is impossible to experience the Georgian table—and its culinary traditions—by walking the neighborhoods of Tbilisi,” Paul told us. Instead, we would sample a number of foods during our time together, and bit by bit, assemble our understanding of the components of a fascinating food and wine culture.

At a nearby tome bakery, we saw the bakers at work and picked up a fresh loaf from Georgia’s version of a tandoor. With little pots of yogurt-like matsoni, we had a splendid park-bench breakfast and were soon ready to taxi and walk and taxi some more.

We took in flea markets and food stalls, a wine bar and a couple of restaurants. Throughout the day, we sampled fresh produce, wine, dumplings and ended our day with a Georgian family-style supper.

Paul was our sure-footed guide through the messy, fascinating Dezerter Bazaar (trust me, there is no way a stranger to the city can navigate the bazaar alone!). The food market sprawls over 2,000 square meters, and is surrounded by a neighborhood along whose streets just about anything can be found: clothing, farm implements, used goods of all kinds and produce sold from the backs of cars and trucks. The name dates from the days of Russo-Georgian conflict in the 1920s, and the sales of weapons and gear by absconding soldiers.

The bazaar was a dizzying ramble through sweet and savory Georgian flavors. We tasted honey, cured meats, spices, cheeses, and pickles. We met chicken salesmen and butchers, and vendors of herbs, meaty tomatoes, and dried pomegranates. The sampling we did here paved our way to later stops for dumplings, wine, and a meal that featured many of the products from the market. Here are just a few of the many stops we made in Dezerter Bazaar.

After a meander through the Dry Bridge flea market, it was time for a visit to one of Tbilisi’s top khinkali houses for Georgian soup dumplings. Onions, cilantro, and spices figured in all four variations we sampled: filled with lamb, a beef and pork mince, mushrooms and potatoes. My favorites were the meat-filled ones, “brothy” and properly sloppy to eat. I loved the manti I had learned to make in Istanbul, but these soupy marvels took that experience up a notch!

Paul showed us how to eat khinkali with our hands, using the knob of dough at the top as a handle. It is said that the best ones are folded with 20 pleats. I did not count the pleats, but the ones we had on our food tour were the best I had in Georgia! We downed our dumplings with two uniquely Georgian beverages: tarragon soda pop and Borjomi, the country’s healing waters from artesian springs. 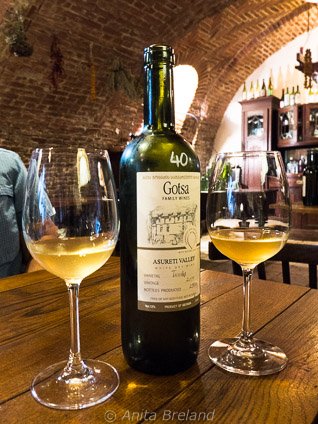 Well fortified with khinkali, we were ready for our visit to a local vintner’s cooperative, where we had a short lesson on Georgian wine preferences.

Georgia’s winemaking history stretches back more than 8,000 years, and wine continues to have a central place in Georgian identity and culinary traditions.

Georgians make many types of wine, but it is the amber-colored wines that have gained prominence in recent years, and the ones I was most eager to taste. These skin-contact wines are often made in qvevri, an egg-shaped clay vessel that dates from the beginning of Georgia’s winemaking tradition.

We sampled seven wines in all, beginning with whites and ambers and finishing with reds. All were organic and from small producers. Every glass came with a story. For me, three wines stood out: the dry white Rkatsiteli 2015, unfiltered but clear and with a slight citrus note; Vino Martville Orbeluri Ojalshi 2015, a dry red wine produced in just one village, and in extremely limited quantities (just 300 bottles!); and Otskhanuri Sapere 2015, a dry, qvevri-produced red wine. To be honest, I did not like every wine we tasted, but that is the point of a tasting, isn’t it?

Sitting down to supper

We finished our day at a family-owned restaurant frequented by locals (my guest-house host later told me I’d visited one of his favorite haunts). It was here that the flavor sensations of the day were brought full circle, and to the table.  Georgia is a country where the land’s bounty is best experienced around a communal table stacked sky-high with extraordinary food and wine, and our supper gave us quite a preview of this.

From the cold dishes—vegetable purees flavored with walnut paste and topped with pomegranate seeds, a salad of pickled bladdernut flowers and herbs, and cheeses served with a trio of sauces—to the steaming bowl of stewed chicken packed with herbs, the meal was a sampler of the Georgian love of food spiced with the camaraderie of friends and family. Every dish was resplendent with the herbs and spices, and the preserved fruits and vegetables Georgian cooks use so lavishly.

In Georgia, diners around a communal table become family, and thanks to Paul and our welcoming hosts, our little tour group had that experience, too.

Many thanks to Culinary Backstreets for inviting me to join this food tour of Tbilisi, and to Paul Rimple for making the day around town so memorable!