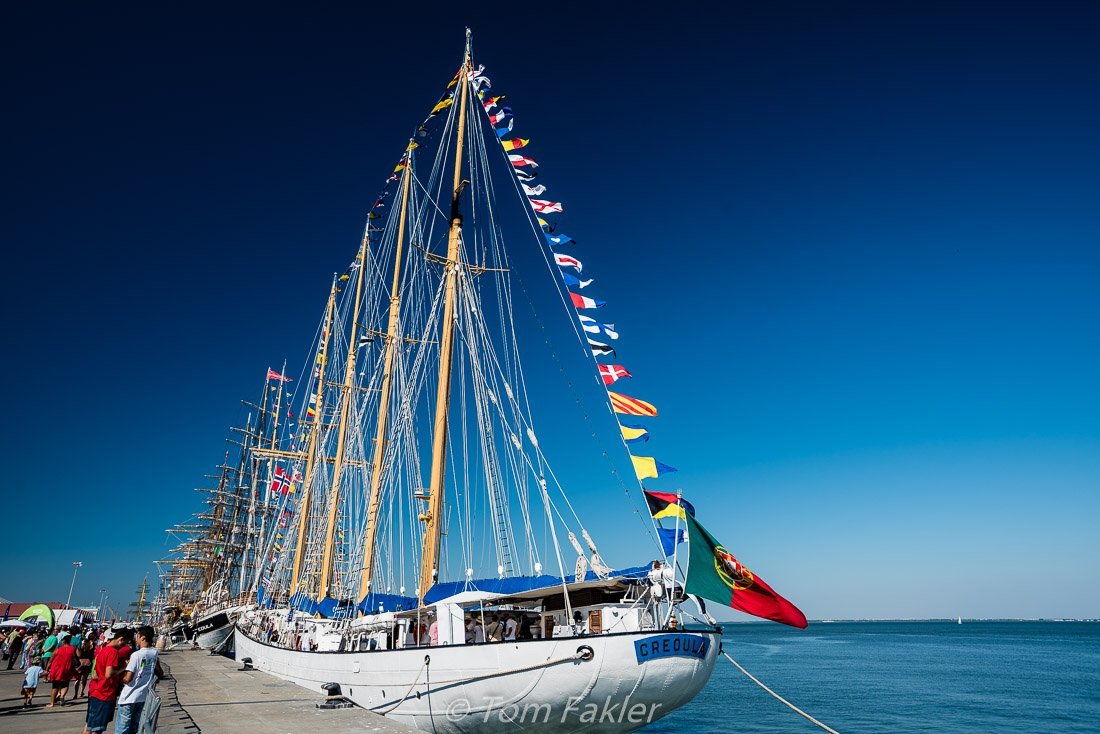 A great pleasure in moving to Portugal has been our introduction to all manner of excellent wines: sparkling, red, wine and fortified. One of our favorite memories from the past year was a tour through Lisboa wine country, aka of Oeste (West Lisbon). The region was previously known as Extremadura. What a confusing tangle of labels for a countryside of gorgeous simplicity!

Last spring, traveling with Patrícia and Luis of Singulartrips, we explored a landscape that climbs from the Atlantic coast through the hilly turf to Portugal’s mid-section. We visited historical vineyards, vineyards that celebrate the country’s seafaring past, and a small-production winemaker plying his craft in a former village school house. We discovered that each of the wines of the region presents a unique character. Here’s a recap of our trip.

AdegaMãe, launched in 2011 as a project of the Riberalves Group, Portugal’s largest codfish distributor, is set among rolling hills near Torres Vedras, just ten kilometers inland from the Atlantic. The vineyards are planted with both indigenous and international grape varieties, and the aim is to be one of the most modern winemaking facilities in the country, producing wines on a par with other national and international regions.

Lisboa Region wines–minerality, freshness and even some salinity”

It’s a strategy that is garnering results. In October, AdegaMãe introduced the Terroir brand, high-end wines that aim to convey the genuine traits of the Lisboa Region. These are limited-edition wines, to be issued only in years of outstanding quality. Earlier this week, one of them, AdegaMãe Terroir White 2013, received the Revista de Vinhos’ Excellence Award—the highest award in Portuguese winemaking. Previously, Revista de Vinhos named AdegaMãe the 2015 Wine Company of the Year. 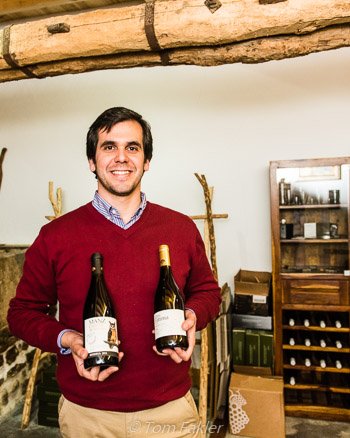 The village of Cheleiros, just thirty minutes’ drive from Lisbon, was historically important for wine production and known for the quality of its vineyards and orchards. Its slopes and terraces and unique microclimate mark the boundary between the influence of the sea and the Cheleiros riverside. Kings bought their wine here, en route to their palaces at Mafra. The ManzWine logo is a tribute to the village’s Roman bridge, once used to carry stones to build those palaces.

André Manz and his family came to Cheleiros in 2004, and planted just two acres with three grape varieties, making his first wine exclusively with an almost extinct grape, Jampal. “I don’t want to produce a lot of wine,” he said at the time. “I want to produce a great wine.” By many accounts, that is exactly what he has done, and the winery is known for its use of Jampal.

Today, ManzWine comprises nine brands produced from local grapes, and in partnerships in Douro and Setubal, two of the owner’s favorite regions. Among the wines we tasted: Dona Fatima, a single varietal named after André Manz’s mother—with a unique fruity flavor and buttery mouth feel—and Cheleiros, named after the original vineyard of the winemaker—concentrated and imposing, with notes of blackberries.

While restoring the village, the winemaker installed his production facility in a former primary school. The output is very limited, and even as the winery approaches capacity, the emphasis remains on the production of boutique wines, rather than expansion.

One hundred years ago, there were 43 wine presses in the village. There is only one now, in the winery’s shop, showcased with other wine-growing artifacts in a small museum gallery. The buildings of Cheleiros village are open to the public for guided visits and wine tastings. 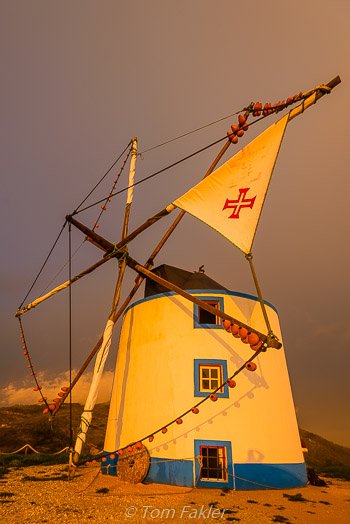 Quinta do Gradil is one of the oldest estates in Cadaval Municipality and is significant both historically and architecturally. The property was owned in the 18th century by the Marquês de Pombal, known for his leadership following the 1755 Lisbon earthquake. A ‘Pombaline’ palace, chapel, mill, granary add to the quinta’s charm. On our visit, dodging raindrops, we enjoyed a memorable luncheon at the restaurant and ended our day with a wine tasting at a windmill atop nearby Monte Montejunto

The vineyards of Quinta do Gradil have been cultivated for several hundred years. It’s more than 200 hectares are planted with both Portuguese and international grape varieties.

The restaurant is a casual setting filled with art, its food inspired by the farm’s location between land and sea. We enjoyed grilled octopus with punched potatoes, salad and a dessert of regional Rocha pears filled with goat cheese. Sauvignon Blanc and Arinto, a balanced, well-structured wine with intense fresh fruit and mineral notes, and vibrant acidity were an excellent accompaniment.

After touring the winery, it was time for a wine-tasting at nearby Aviz windmill. Our hosts were miller and master craftsman Miguel Nobre and his nephew, who served us freshly baked bread stuffed with choriço while Bruno Gomes of Quinta do Grandil poured the wine. The miller showed us how the milling process works, and how terracotta pots provide the ‘song of the wind’, indicating its direction and strength. Before we left, the sun came out to shine a golden light on a fairytale scene.

The Lisbon wine region is made up of nine sub-regions, and our wine tour was too short to do more than giving us an idea of the types, and quality of wines, produced. Clearly, more research is required! If you’re thinking of adding West Lisbon to your travel itinerary, here are a few suggestions for you:

Tasting port with a view in Porto