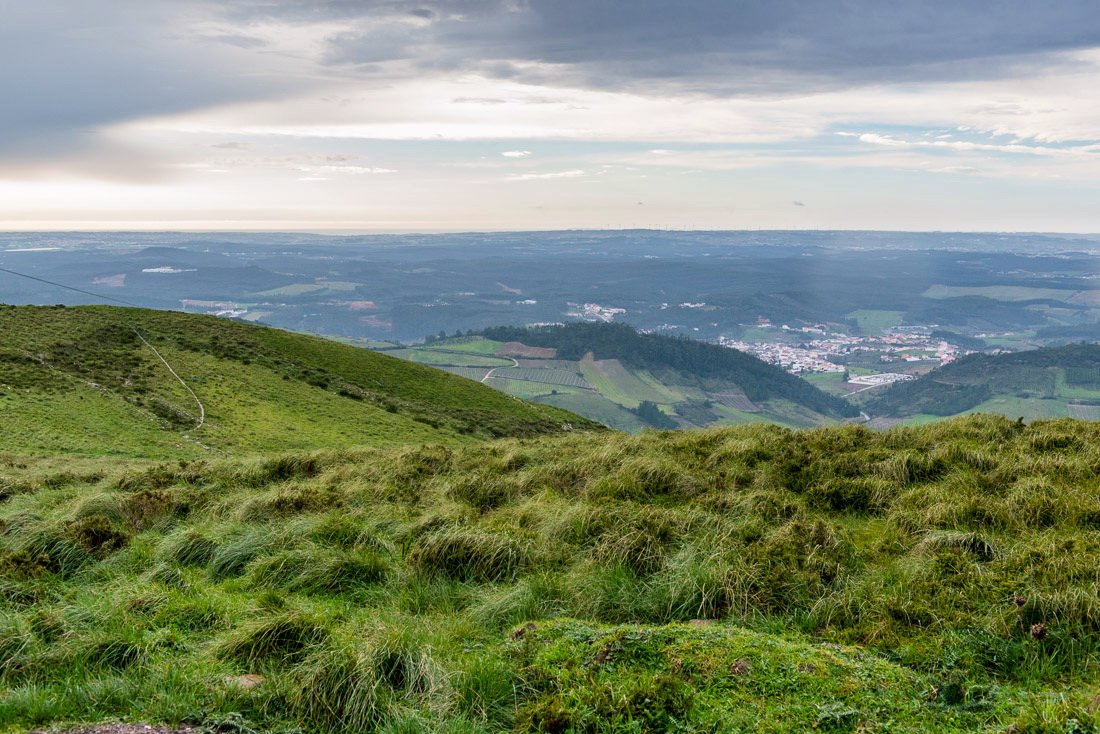 Lisbon’s breadbasket is in its western reaches, in the hills and valleys that cradle the Tagus above the capitol and tumble westward in fertile arcs toward the sea near Peniche and Nazaré and Ericeira. West Lisbon, or Oeste, is a magical, often windy place, skies over hilly terrain scudding with clouds, or boldly blue. When Tom and I traveled here with Lisbon-based Singular Trips, we experienced food and wine that sent us home with tastes provided by locals, and stories etched in stone and carved in wood, and told to us by makers, those custodians of cultural memory.

Everyone we met here was an enthusiastic ambassador for Portugal’s food traditions. Read on for a recap of several stops we made in towns just a few kilometers in from the Atlantic coast, and in the protected landscape of Serra de Montejunto.

“We eat local because we can.” 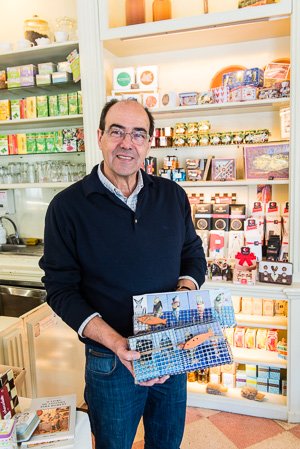 At Casa da Avó Gama on Rua Serpa Pinto in Torres Vedras, visitors can enjoy coffee or tea with homemade cakes, surrounded by more than a century of history.

The cafe’s kitchen follows heritage recipes for its cakes, and a portrait of the originator of many of them is prominently displayed. Owner António Luís Santos prides himself on knowing his suppliers personally, and has visited every production facility represented in his shop. “If I cannot visit a supplier,” he explained, ” I don’t carry the product.”

The building is in the center of town. It was a tailor’s shop more than one hundred years ago, and afterward, a shoe shop. Today, shelves that once held bolts of fabric display regional food products, many of them very local.

Tables for enjoying coffee and tea are set into window alcoves between the tiled columns of the building and on sunny days, on the cobblestones outside. The popular cafe is a family-run business, with the former engineer, his wife and son all active in serving a clientele of locals and visitors.

Onilda’s Sabores & Memórias delivers the promised flavors and memories via butter cookies made in Torres Vedras from her grandmother’s recipe, and dedicated to the memory of her mother. Each cookie is stamped and packaged in a themed box decorated with graphics and text. Onilda Tereso is a retired history teacher, and she has brought her passion for Portugal’s history and architecture into the cookie business. Her tasty biscuits celebrate personalities, monuments and icons of Portugal. Imagine: Fernando Pessoa with your espresso!

Portugal’s jams and chutneys are great accompaniments for cheese, and Conservas a Oeste in Torres Vedras makes a range of them. New to us: uvada, a traditional grape jam sweetened only with apples. Other flavors we tasted on toasts and a morsel of fresh goat cheese included spiced tomato jam, onion jam and apple jelly with rosemary.

Products from Conservas a Oeste are available at selected shops in Lisbon and Porto, the monthly summer market in Torres Vedras  and the Sunday market at Lisbon’s LX Factory. Paula Sarreira, a former police officer with the United Nations, founded the artisanal start-up in her kitchen, combining traditional methods with new flavors. “Hand-made means cutting by hand,” she says, and that keeps production low and quality high.

Caldas da Rainha was founded in the 15th century by Queen Leonor as a thermal spa town, its medical facility featuring waters rich with sulfur.  At the turn of the twentieth century, it was home to favorite son, the artist Raphael Bordallo Pinheiro. The West Lisbon town is still graceful and filled with art, and several museums worth a visit.

For a traveler in need of a serious sugar hit, this is also the place to stop for cavacas das Caldas (Portuguese popovers) and beijinhos das Caldas (Kisses from Caldas) . For me, the “kisses” offer a smack of lemon that tempers the sweetness a bit. I could see these being rather addictive, much like their soft-and-sugary American cousin, the donut hole!

The Montejunto mountain range has considerable historical and ecological significance. At its highest, coldest point lies a seldom-visited link between Oeste and Lisbon: the ruins of Real Fábrica do Gelo (the Royal Ice Factory). This “snow factory”, one of two in mainland Portugal –there’s a third Portuguese one on the island of Madeira–supplied the royal court in Lisbon with blocks of ice for about 150 years.

The unique facility at Serra de Montejunto comprised an elevated well and wheel house, 44 shallow stone tanks for freezing ice, and a conservation area with storage silos and an expedition preparation room. This facility operated until the dawn of refrigeration in the late 19th century.

When the royal taste buds thirsted for something cold at table, the ice was cut into blocks for transport. Wrapped in hemp sacking, the ice was carried by donkey down the mountain to the Tagus River, then to the capital by boat. For more than a century, an entire village was dedicated to the bone-chilling toil of keeping Lisbon supplied with ice. Today, the ruin operates as a museum detailing the work that went on here.

…and memories framed with windmills 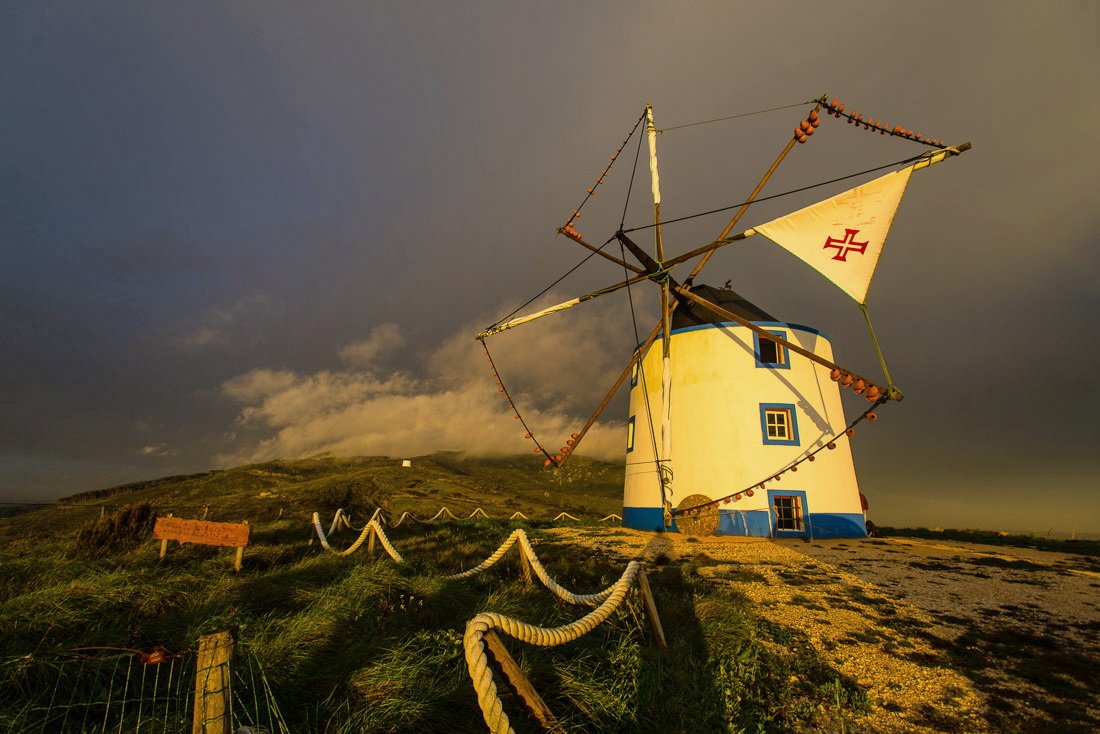 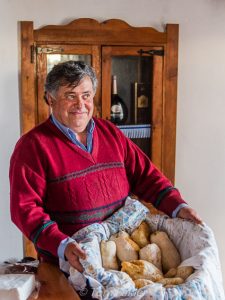 At one time, the Serra de Montejunto wore a necklace of windmills, their sails tipped with terracotta pots whose music signaled to the miller, the direction and velocity  of the wind. Miguel Nobre, master restorer, miller and baker, welcomed us to one of the 32 beautiful structures he has restored in this region. He fairly glowed with pride as he demonstrated the windmill’s operation, with its enormous grindstone and working “musical” pots.

As we sipped a glass of wine before a warming fire against the late afternoon chill, the miller brought out freshly baked country bread stuffed with sliced chorizo, the sausage moist and fragrant in its still-warm cover. Afterward, as we stepped out into wind and spluttering rain, a rainbow–at first faint, then bold against a darkening sky–appeared.

It was a stunning cap to our first day in the region!

It’s possible to visit Oeste independently, of course, but to make a direct connection between local foods and the people who make them, a personalized tour can be a fine way to do just that. Our meander through some of West Lisbon’s towns and landscapes was a sampler taken from several West Lisbon excursions offered by Singular Trips.

For Tom and me, our time in Oeste–following an itinerary tailor-made just for us–introduced flavors and people we might never have discovered on our own. Thank you Singular Trips, for our introduction to West Lisbon!

Stay tuned for several winery and dining experiences from this fascinating region.

Interested in booking a tour with Singular Trips? Use this code and receive a 5% discount: THBZ9BW

Disclosure: We were guests of Singular Trips for our Oeste tour.