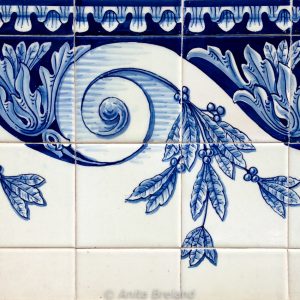 Rain sweeps overhead in great roiling swirls. Trees bend into the wind, then toss their newly leafed branches in defiance. Buffeted on all sides, the delicately painted tiles on the buildings of Porto welcome spring, not a tendril out of place.

Tom and I moved to Portugal in the dead of winter, and frankly, until just this week it has seemed more like winter than many places do during the real thing. Trees are greening, though, and bursts of color popping up in the grassy swards of the city’s garden spaces.

Until we can have a proper experience of Portugal’s version of the season, we hold tight to our memories of spring in Switzerland, where we spent so many years. Our favorite memories of the season there are not from the high Alps, but rather, lowland celebrations of the turn of winter to spring.  Basel is in a bend of the Rhine River known as the Dreiländereck, or Three Countries Corner, so some of our most enjoyable spring days were spent across the German or French border.

Won’t you join me for a ruffle through the archives?

The Upper Rhine is an easy day trip from Basel, and the oldest eating establishment in Eglisau–now a boutique hotel with not one, but two, excellent restaurants–makes a wonderful weekend treat. We first enjoyed the medieval atmosphere of that town in April, as well as great food and wine, from our base at Gasthof Hirschen.

In Canton Valais, cows jostle to lead their herds in the Combat de Reines, a competition that crowns a winner in April. The atmosphere is that of a county fair, echoing with live music and the aroma of sausages on the grill.

In Canton Ticino, the natural surroundings of Monte Verità provide the perfect backdrop for an eclectic day out in Ascona,  communing with the creative spirits that brought this place to life in the early 20th century.

Spring at Mount Rigi means fresh-but-not-too-chilly air, tulips blooming in gardens, and golden sunsets over Lake Lucerne. After the early dusk of winter, being able to see the sun dip behind mountains as we ordered dinner was a springtime treat!

Mainau Island–OK, this one isn’t Swiss at all, and involves a border crossing into Germany. But One Perfect Day on the Bodensee is a marvelous way to say hello to spring!

And near to Basel

Across another border, this one French, came a day marking the very first, rather ‘nettlesome’ spring for Anita’s Feast. It happened one Sunday on a cycling outing to nearby Leymen.

In 2015, daffodils announced the addition of Basel’s Merian Gardens to the ranks of Gardens of Switzerland. The Basel gardens are a personal favorite for strolling when the weather warms, especially when peonies bloom, signaling the shift onward to summer!

At the first hint of warm evenings, Tom and I always look for springtime inspiration at outdoor tables, and in the Basel area, we found it at several restaurants where the owners were as happy to see longer days as we were.

Cherry trees in bloom In the Frick Valley just a few minutes by train from Basel, a walk along trails in gently rolling hills is an immediate mood-shifter. Best of all, these blooming beauties hold the promise of perfect fruit in just a few weeks’ time.

‘It is spring again. The earth is like a child that knows poems by heart.’

The Bohemian-Austrian poet Ranier Maria Rilke called Switzerland his ‘homeland of choice’. Almost a century ago, he spent spring on an estate near Pratteln, just outside Basel.  Writing about Rilke’s years in Switzerland, biographer J. R. von Salis called the 1920 season, ‘capricious, reluctant…with sudden vagaries of weather and changes of temperature.’

Kind of like spring most places, don’t you think?

Through the lens: Bishkek, Kyrgyzstan