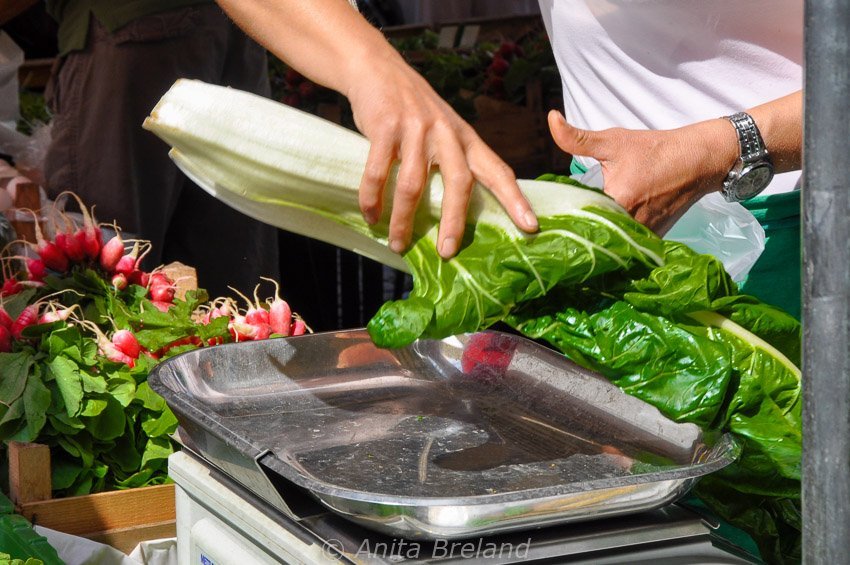 The aroma of roasting chestnuts, and the allure of earthy wild mushrooms, bright green chard, and olives of every hue. A walk through the Basel Stadtmarkt on an autumn Saturday offers temptation at every turn, and is a magnet for tourists and locals alike. We have written about markets in nearby Alsace and Baden, Germany, but I’ve just realized we have barely mentioned our closest one! 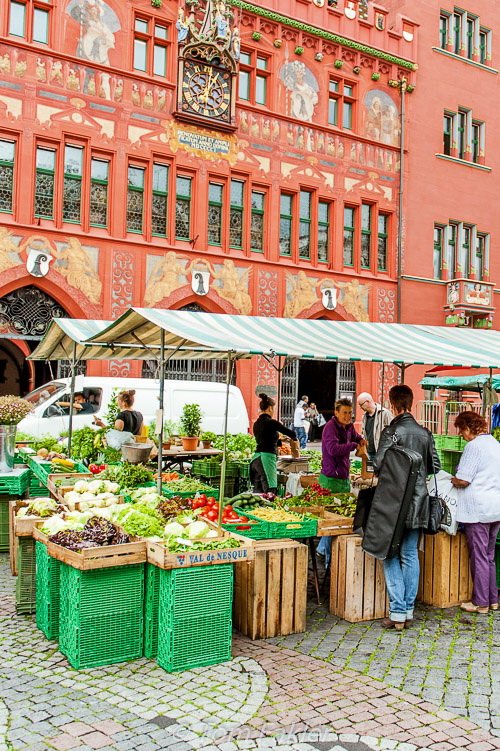 Operating under the imposing red façade of Basel’s Town Hall, the market manages to be both lively and orderly at once. Trams grind past every couple of minutes. Shoppers (mostly patiently) wait their turn, filling their bags and happily sampling cheeses, olives and salami.

The market features products from France and Germany, as well as northern Italy and Ticino, Switzerland’s Italian-speaking canton. Of course, there’s plenty of Swiss cheese, bread, sausages and fruits and veggies as well. The pickings are good, albeit pricey. This is purely a food market, with a few deli items and flowers alongside. Prices are substantially higher than in local supermarkets, so my purchases tend to be smallish ones. Certain vendors area always ready with a smile–and a taste or two–which makes stopping by Marktplatz on my errands around town pleasant indeed.

Basel’s city market has an centuries-long history, with a market on this spot first mentioned in 1075, in a space just half the size of today’s Marktplatz. Called the Kornmarkt, or “grain market”, it was located beside the Birsig River, which flowed through the center of Basel (it now runs underground).

Basel’s Town Hall has occupied real estate on the Marktplatz since 1290, but the dramatic tower we see today arrived on the scene much, much later, after Basel entered the Swiss Confederation at the turn of the 16th century. The city celebrated the 500th anniversary of the Rathaus last year!

As in markets everywhere, the best vendors in Basel know their customers, and remember preferences. The first time I stopped at my favorite stall several years ago, the seller asked me to wait a moment, and ran off to bring me a recipe for making soup of the pumpkin I had just bought. I’ve been returning to chat with her ever since.

Food trucks offer coffee, sandwiches and grilled bratwurst; and under an arcade to one side of the Marktplatz, the Globus department store sells sandwiches, fresh bread and Ben and Jerry’s ice cream. Sidewalk tables in front of the Schiesser Confisserie and the Mövenpick Restaurant are good spots for a coffee break and people watching. Better yet for many people, though, are the tiny tables put onto the cobblestoned Marktplatz itself by Fumar e no Fumare, a popular nearby coffee and drinks bar.

The Stadtmarkt is open six days a week. There are also quite a few Basel flea markets, Basel weekly markets around Basel.

When it comes to fresh markets, the people of Basel, Switzerland are spoiled for choice. In the Dreiländereck, or “three countries corner” along the Rhine, there are numerous local destinations for a Saturday morning’s shopping: Saint-Louis and Mulhouse in Alsace, and Lörrach across the German border. 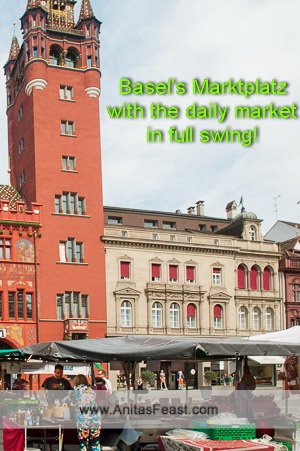