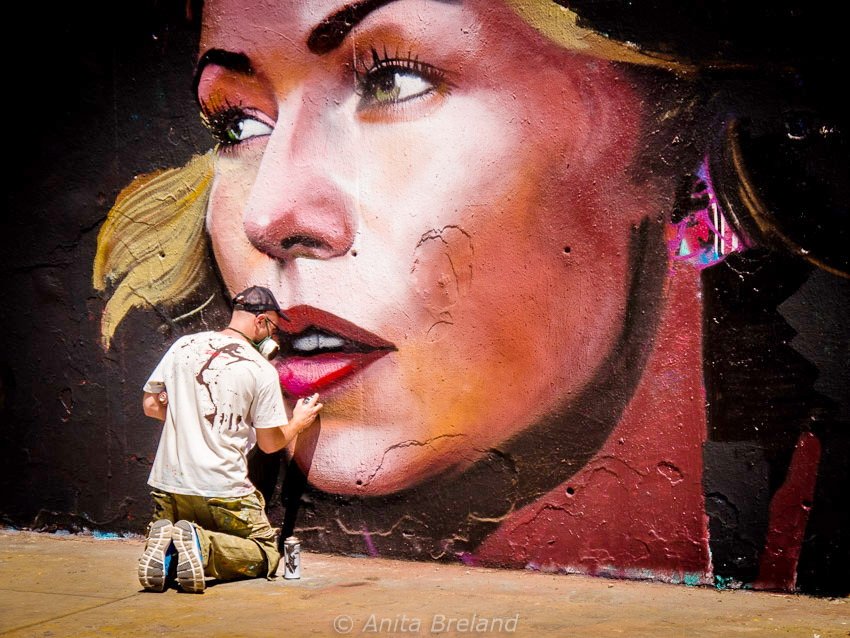 Catalans have been inscribing, etching and painting their sentiments onto walls in Barcelona for a very long time. A recent street art walk with a local historian introduced our group to some of the city’s best contemporary street artists, along with some of Barcelona’s fascinating street-art back story.

Over two very full hours in the Gothic Quarter and El Raval, guide Cayetana of Trip4Real provided a lively commentary on various art forms we encountered on walls and doorways, and down side streets in the heart of the Ciutat Vella. She doled out history in manageable bites, which left me eager to learn more. Let’s start with the back story.

Just around the corner from the neo-Gothic façade of the Barcelona Cathedral, a barely visible slogan pays homage to supporters of former dictator Franco. The wall, with its remaining traces of lettering stenciled onto the cathedral side facing Calle Santa Lucia, was our first stop on the tour.

The words “Jose Antonio Primo de Rivera – Presente!” were emblazoned on virtually all churches during the Franco era. They commemorated the youthful founder of the Falangist Party, executed by Republican forces in 1936, at the beginning of the Spanish Civil War. Primo de Rivera was promptly mythologized as a fallen hero, when Franco took over Falangism as a tool of the military dictatorship. The slogan was mostly obliterated in 1997 during a cleaning of the cathedral walls for a royal wedding.

Not far away, at the intersection of Plaça del Pi and Plaça Sant Josep Oriol, there was a tribute of another sort during the Civil War, brushed onto a wall of the Església de Santa Maria del Pi, a 14th-century Gothic church. For a time, Plaça del Pi was renamed “Square of the Unknown Militia”, honoring citizens loyal to the Republicans. It was painted over during the years of the Franco dictatorship, and restored by the Barcelona City Council just a few years ago.

A large derelict space in Barcelona’s Raval district commemorates a more recent tragedy: the 2013 death of Raval resident Juan Andres Benitez, in police custody. Art along the walls inside and outside the agora serve as witness to the event. The site is now dedicated to community use, and includes a powerful art space, a tiny garden plot and a small performance stage.

In Barcelona, the streets speak!

The early 2000s were glory days for street art in Barcelona, with artists from all over flocking to the city. That heady period ended in 2006, when the City of Barcelona imposed a no-tolerance policy for the art form. Enforcing one of the strictest anti-graffiti laws anywhere, the government levied heavy fines on street artists, and a number of them departed for more welcoming shores.

There has long been a tradition for public art in Barcelona, though. It shows through in the street art we see today, from a Keith Haring installation at the city’s Museum of Contemporary Art, to art commissioned for the city’s Ciutat Vella urban renewal project, to several painting walls that welcome artists who apply for a permit to paint. BCN Rise & Fall, a documentary telling the story of Barcelona’s love-hate relationship with street art, premiered in Barcelona in February of this year.

In 1989, American artist and social activist Keith Haring painted a mural containing his signature iconography on an inclined wall in Plaça Salvador Seguí, in Barcelona’s Barrio Chino, in a space littered with syringes. The ephemeral work has been reproduced several times on a concrete wall outside the Museum of Contemporary Art (MACBA), most recently on the 25th anniversary of the work in 2014.

A large-scale mural for the uraban renewal project “Cuitat Vella” was commissioned by the City of Barcelona. Painted by Sergio Hidalgo Paredes , aka Sixe Paredes, in simple shapes and colors, its style lies somewhere between naive and futuristic. The work pays tribute to Barcelona muralist Joan Miró.

The land around a former power plant, Xemeneies (Chimneys) on Avenida Paral·lel now generates power of another sort…the people-power of street art. The park is one of several art spaces made available to street artists upon application to the City of Barcelona. The installations are painted over frequently, so there is plenty of reason to return for another look.

Read more about the park in this post from Barcelona Free Art.

Street artists Cranio and El Pez collaborated on this installation at Tres Ximeneies Park. Cranio is from Sao Paulo, Brazil, and his artistic themes include consumerism and political corruption, among others, with inspiration drawn from well-known cartoons and Surrealism. Pez uses the huge smiles of his fishy characters to spread positive energy.

Visit the El Pez website for announcements of exhibitions and solo shows. For more about Cranio, take a look at the description of his recent exhibition at Barcelona’s Montana Gallery.

Consider the observations (and maps) of writers and photographers who’ve already been there, to make your personal journey of discovery a bit easier!

Street art is now flourishing on the formal art scene, with many of the artists showing in galleries around Europe and the world. Stay tuned for an introduction to some of the artists whose work we saw on our tour.

I was a guest of Trip4Real and Barcelona Tourism for our street art tour. Observations are my own!