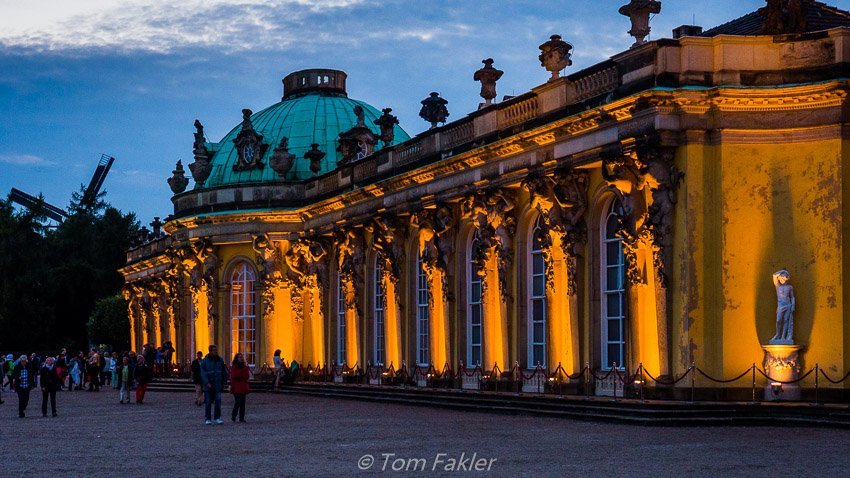 Once each year on a summer night in August, in the little Prussian town of Potsdam, Germany, magic happens. For one enchanting evening, the town’s summer palaces of kings and the vast parkland around them are open to the public. In a marvel of historical reenactment, guests are greeted by Potsdam’s citizens, dressed in period costumes. The park, normally closed to visitors at night, sparkles with hundreds of tiny spotlights as dusk falls. When Tom and I attended the event , we were rewarded with an energetic, over-the-top step back in time.

Potsdamer Schlössernacht celebrates the romance of an era long past, and the “Prussian virtues” of architectural beauty, horticulture and gentility. It’s an evening that surprises with performance art popping up along paved and graveled pathways and music on temporary stages erected beside the opulent summer residences of Prussian royalty. 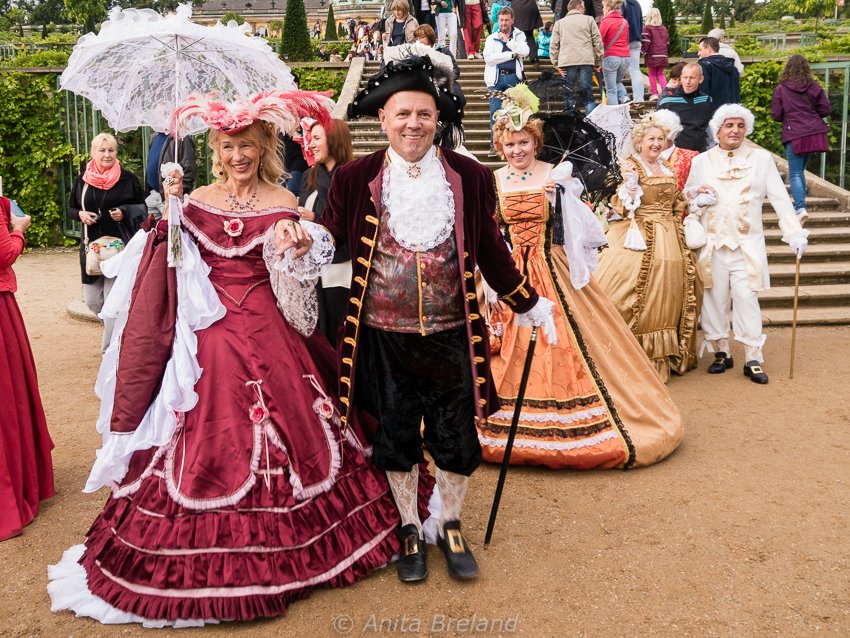 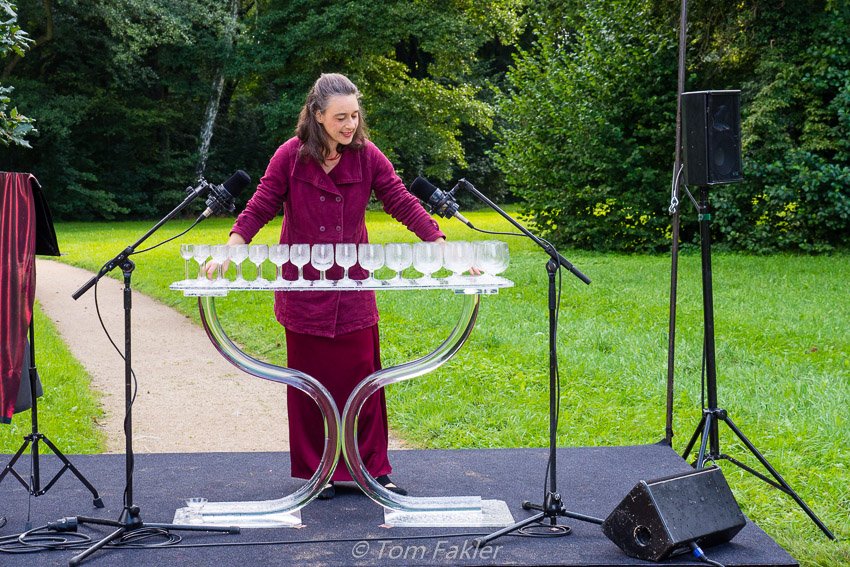 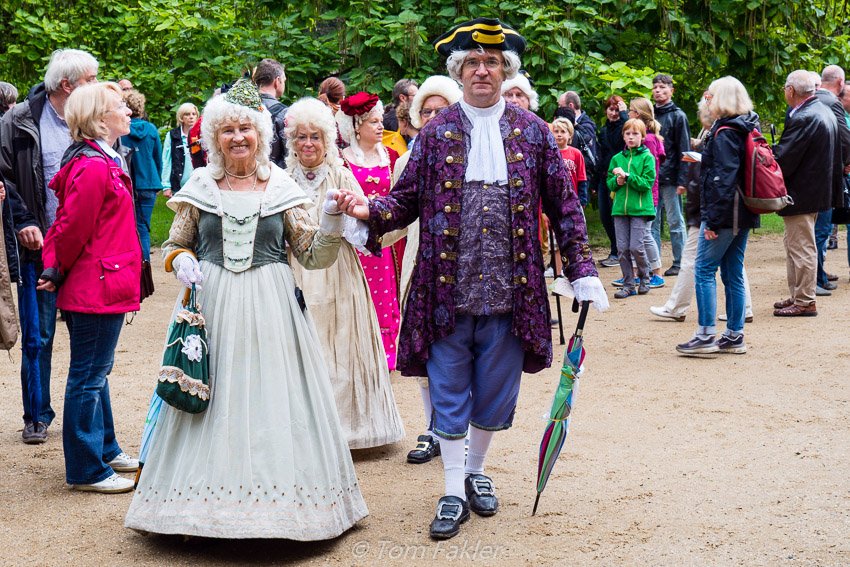 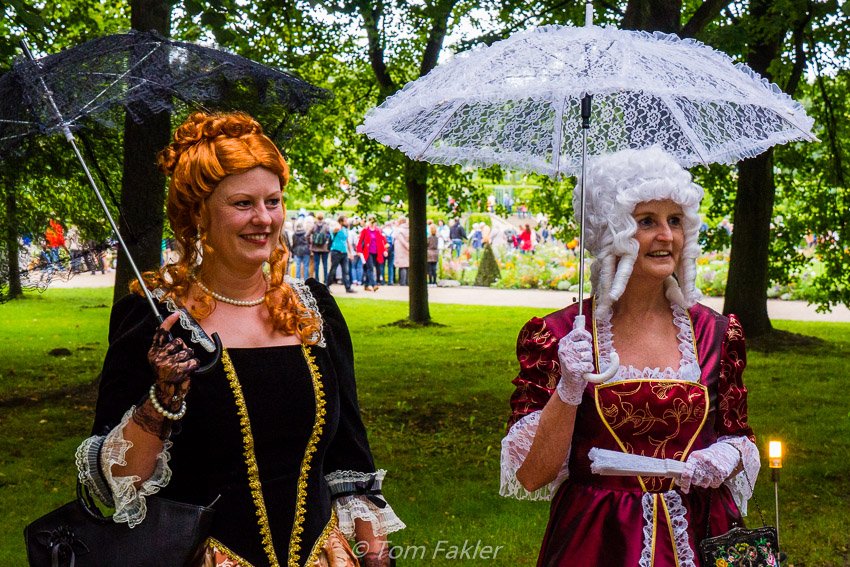 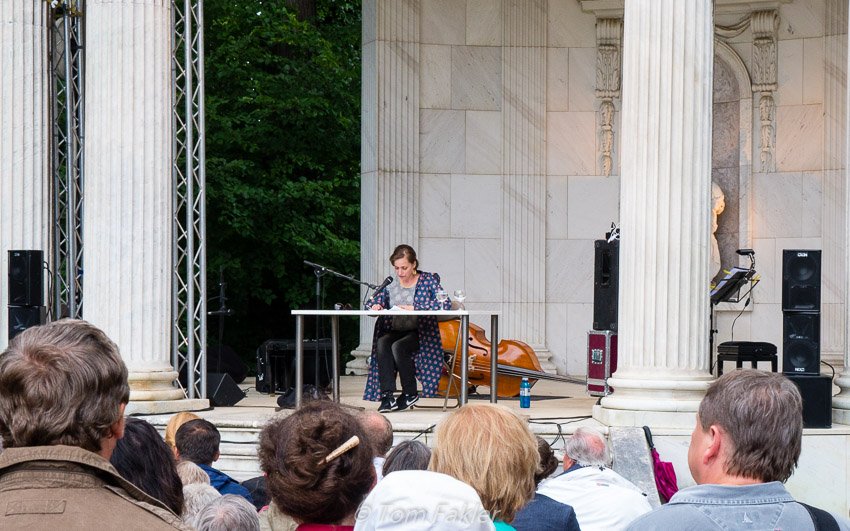 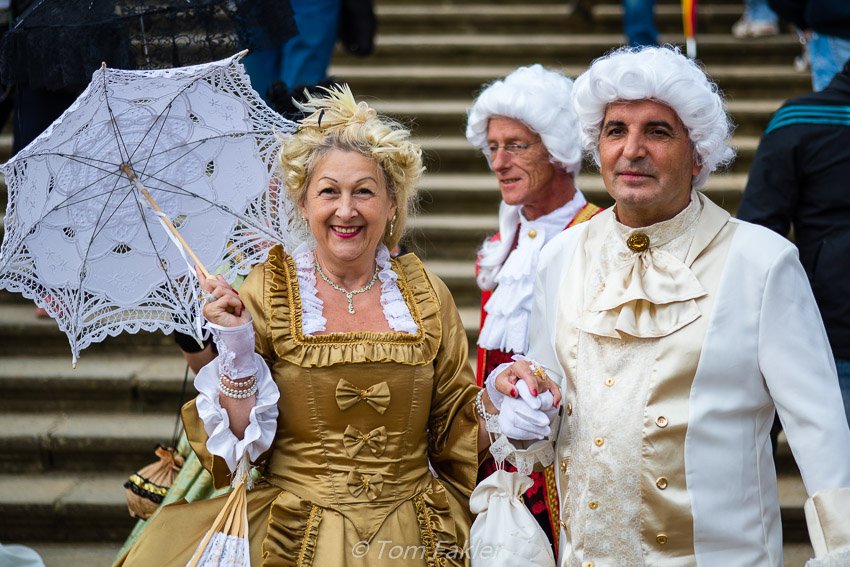 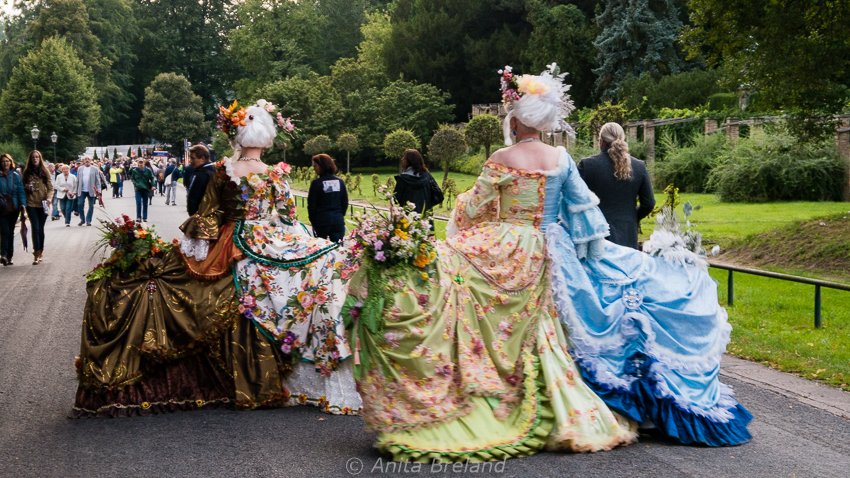 Schloss Sanssouci– “Ohne Sorgen” or “Without Care” in German–was built in the French Rococo style in the 18th century by Frederick II (Frederick the Great). The palace is the centerpiece of Potsdamer Schlössernacht. The other buildings in the park–Charlottenhof Palace, Neues Palais, the Communs, the Orangerie, the Chinese house and others–all serve as backdrops for musicians, storytellers and dancers, as well.

Centuries-old trees lining the walkways, gardens in the then-new English style designed by Peter Lenné, and everything contributes to the mood. Even the towering trees at the entrance to the park become storytellers for the evening, reciting poetry and sharing historical anecdotes through loudspeakers perched in their branches. 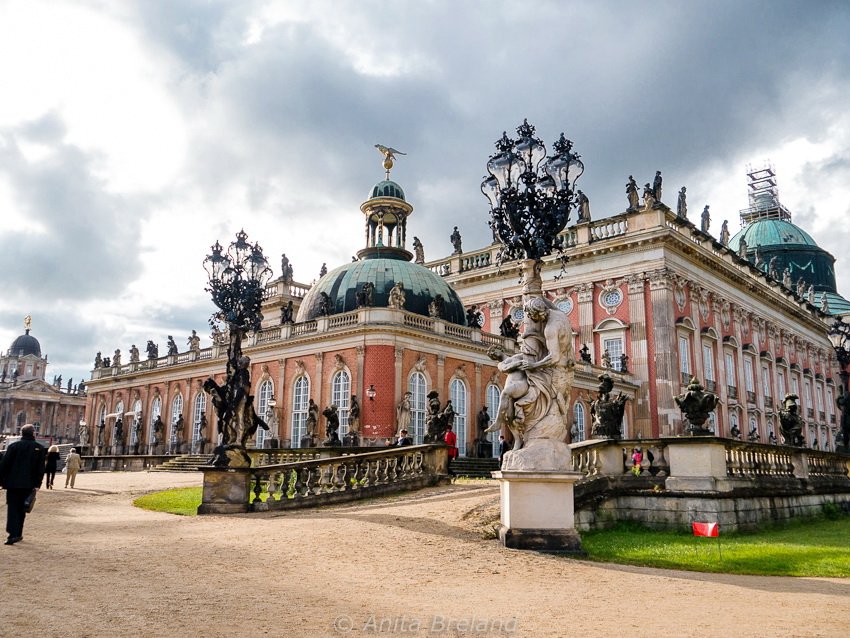 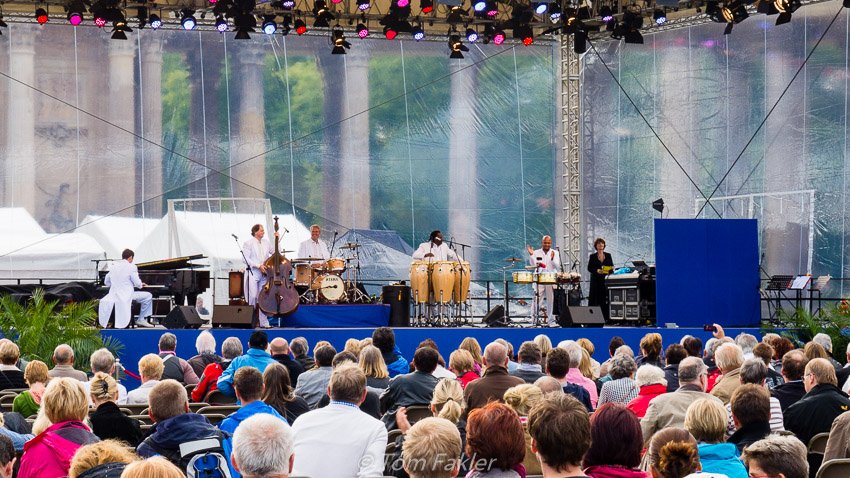 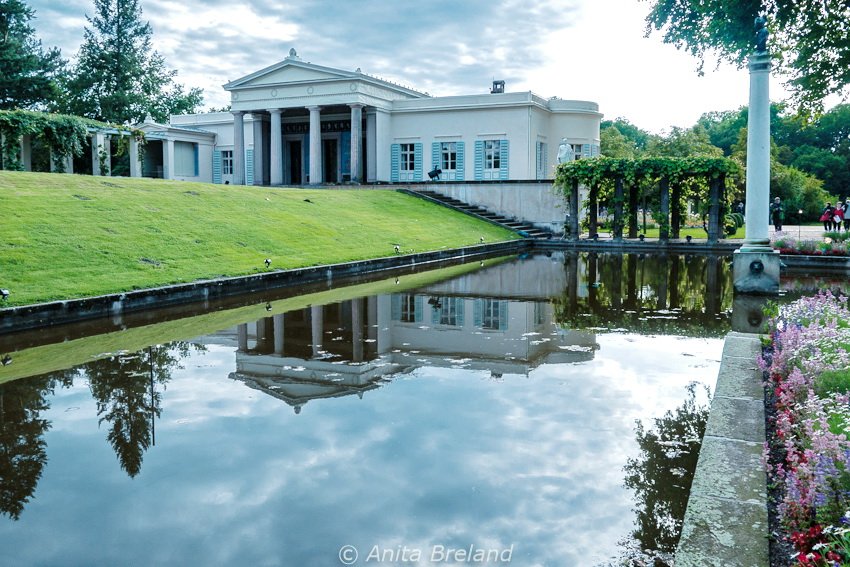 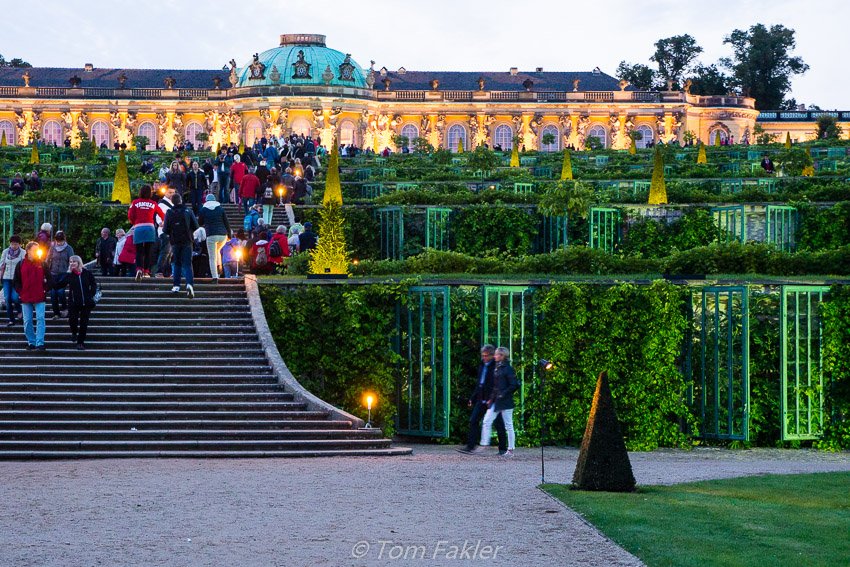 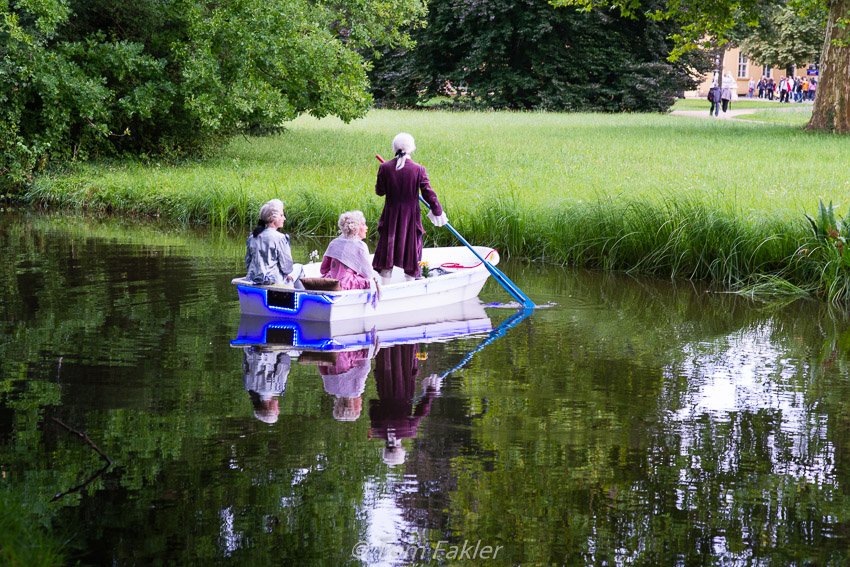 Potsdamer Schlössernacht is an entertaining way of looking at history, conducted entirely in German, which, except for dramatic readings at some of the picturesque venues, does not present a problem. For the most part, the occasion is a visual fantasyland, set to music–classical and jazz–and accessible to everyone.

Given the flat terrain through much of the park, the event is even wheelchair-accessible. Landscape architect Lenné was an indefatigable designer of parks and in his later years, an urban planner with a view toward providing commoners–not just nobility–with the relaxation of parklands. The annual Potsdam is a brilliant reflection of that point of view.

It’s astonishing to think of the effort that goes into creating such an unforgettable mood for just one night each year! 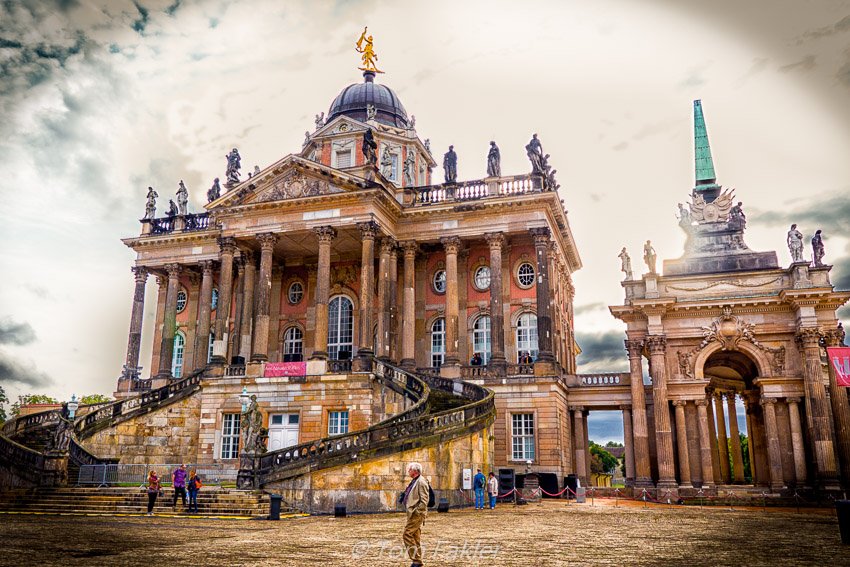 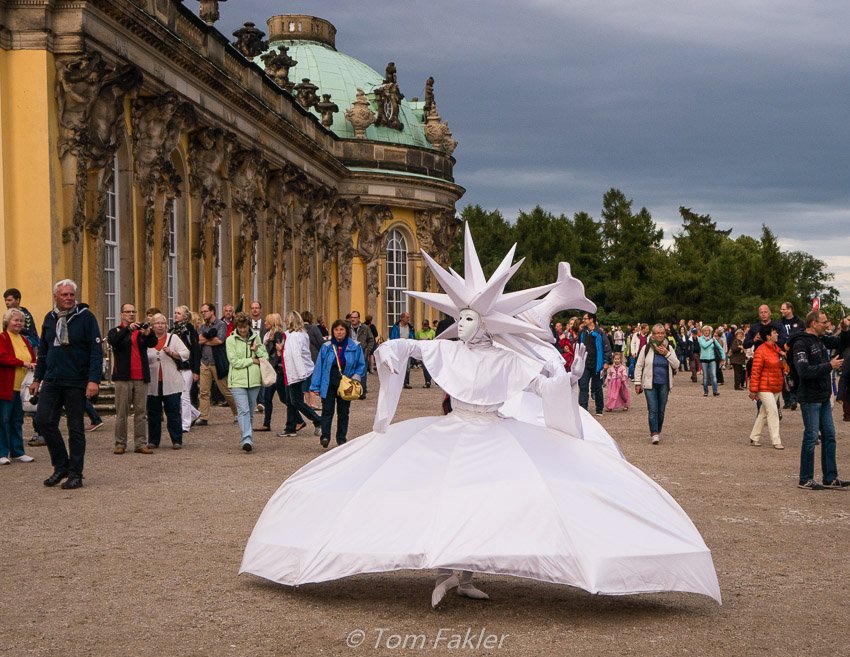 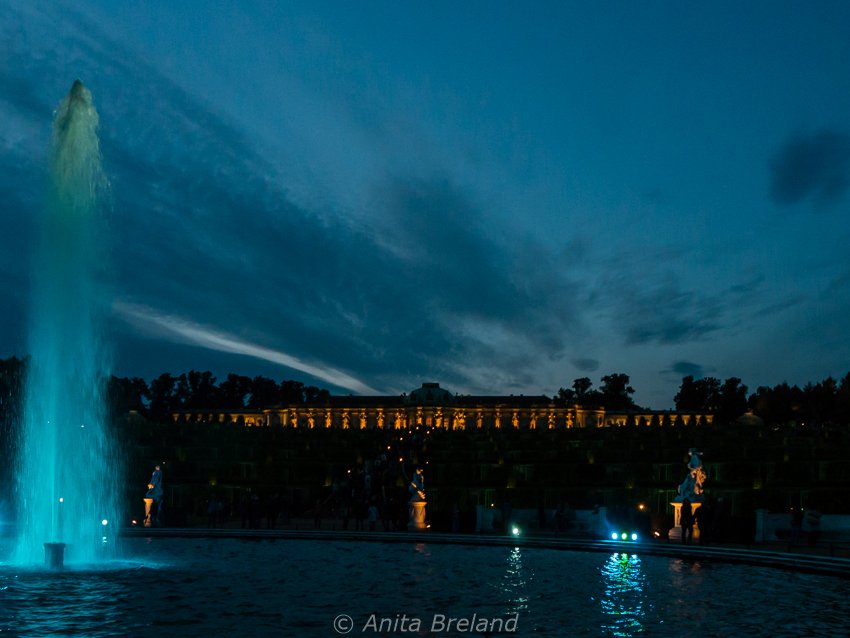 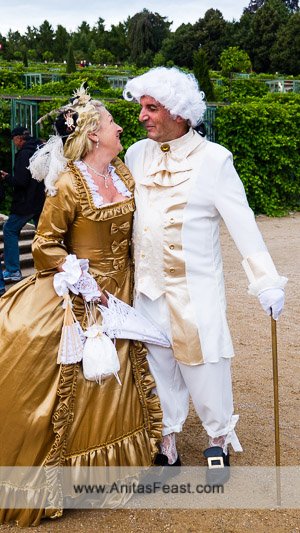 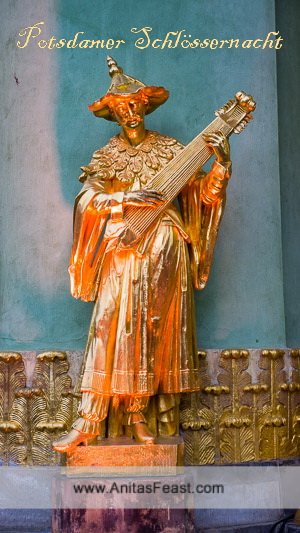 The number of attendees is limited to 33,000 and in this spacious setting, even that number is well accommodated. A portion of proceeds from ticket sales goes to continued reconstruction of the palaces and gardens. Check the Potsdamer Schlössernacht website for dates and times of entry, and ticketing details.
Potsdamer Schlössernacht is a one-evening event, but on the preceding evening it is possible to enjoy a symphony concert under the stars, and admire the Sanssouci Park after the music finishes.

We were guests of Deutsche Bahn and Berlin Tourism, but pleasure under the stars was all ours.