The scent of pine spirals toward me and sand crunches underfoot. An intermittent sun splashes light, then retreats, leaving shadows of palm trees across the path. Bees strum the rosy petals of a family-sized bush lounging fragrantly nearby. The way dips, then curves upward and becomes a staircase as the Mediterranean comes into view. The sea air is fresh and the breeze becomes a bluster as I near the promontory. The stunning Marimurtra Botanic Garden at Blanes has given me my southernmost opportunity for a true sense of Catalonia’s “Wild Coast”.

The cliffs and coves of the real Costa Brava begin at Blanes, an hour north of Barcelona. There, one of Europe’s top botanical gardens slopes from the Tower of Saint John down to the Convent of Saint Anna, history and horticulture joined above the blue of the sea. From the garden’s entrance gate, it’s a ten-minute walk or even shorter bus ride back down to the seafront of Blanes, once the ship-building center of Catalonia.

Founded by the Romans in the 1st century AD, Blanes has Iberian roots much older than that. For centuries, Catalonia mined coal inland, then exported it by sea, from the port at Blanes. The town still has an active fishing fleet, as well as the region’s only fish auction. The resort’s coastline stretches for four kilometers, most of the sandy bays and rocky coves well served with water sports and other tourist facilities. With a population of almost 40,000 year-rounders, Blanes is a popular and family-friendly beach destination. Many Barcelonians have their weekend- and summer houses here.

The town fell on hard times in the early 20th century, especially in the 1930s, when the local population suffered bombing, famine and repression during the Spanish Civil War. With the arrival of tourism in the 1950s, though, Blanes again flourished, becoming a popular international holiday spot. Nowadays, restaurants, ice cream parlors and high rise hotels jostle for attention along with traditional Spanish street markets, fiestas and folk dancing fairs.

A step back in time

Birrasana is an annual celebration of artisanal beers featuring brewers from Catalonia and around Spain, and this year, a number of guest brewers invited from France, Italy, Germany and Hungary. The 2015 edition of Birrasana was held on a picture-perfect weekend in May, with musical performances and DJs providing a party atmosphere. To accompany the beer, wood oven pizza, grilled meats, sandwiches were on offer, along with a selection of tapas.

When you live or vacation in Catalonia, you are never far from good food! My own food experience in Blanes was limited to beer-tent tapas and a nip of wonderful chocolate on a stroll around town. However, there are more than 150 restaurants and bars in Blanes, many of them well reviewed on Trip Advisor. Do you have suggestions for great Catalan food here– especially local specialities such as Blanes prawns, fish stew (Suquet de Peix) and anchovies (Anchoas al Estilo de las Medas)? Please share your recommendations in the comments!

If you are short on time, but want to dip into Catalan culture by the sea, family-friendly Blanes makes a fine day trip from Barcelona or Girona. The biggest event of the year is Els Focs de Blanes, held in July, where nights literally explode with pyrotechnic light and color.

• Blanes is easily accessible, with a number of options available for arrival by train, bus or private vehicle.
• Be sure to visit one of the botanical collections for which Blanes is known: Marimutra Botanical Garden, or on the outskirts of town, the Pinya Rosa Tropical Garden (home to Europe’s largest collection of living cacti).
• Look for restaurants frequented by locals. The area just behind the promenade (Passeig de Dintre) is said to have a number of good ones.
• Beer lovers, consider a stop-over for the next Birrasana, the region’s signature beer festival.
• To see one of the top fireworks displays in Europe, head to Blanes the third week in July for the Els Focs de Blanes, an international competition that has been running for 46 years. Expect huge crowds!

I visited Blanes as a guest of Blanes Turisme. Opinions are my own. 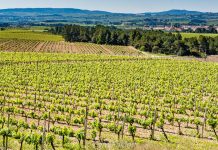 Tasting the food-friendly wines of Spain