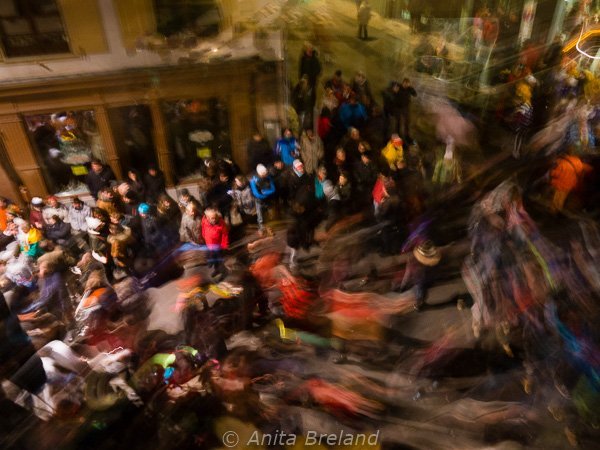 Basel’s Fasnacht, as Carnival is known here–is a blur of sight and sound, color and music. It goes on non-stop in the city’s Old Town for exactly 72 hours in the week following Ash Wednesday. This year, Anita and I watched Morgenstreich from the vantage point of a friend’s apartment in the midst of the action. 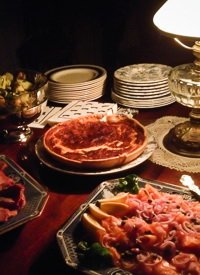 The “three most beautiful days” run each year from 4:00 am on Monday morning until 4:00 am Thursday morning, and we were on hand for the show from build-up to clean-up.

For Morgenstreich, we enjoyed cheese and onion pies and other Fasnacht fare with friends as the crowds swirled through the street below. Later, we were showered with confetti, mimosa branches and silly tokens at the big parades. In the evenings, we followed groups of pipers and drummers as they marched through the lanes of the Old Town, and we enjoyed the discordant-but-jazzy brass band concerts.

We also did our best to understand the intricate themes painted on more than 200 lanterns displayed at Basel’s Cathedral Square, and watched Baselers howl with laughter at comedic performances in two of the many cellars beneath Basel’s medieval buildings. I even set a clock and went out to marvel as clean-up crews rolled into the Old Town to clear all evidence of the three-day party.

As the lights were turned out at exactly 4:00 am Monday (yes “exactly”, remember this is Switzerland) the leaders shouted “Forward March!” and the Cliques, with their lanterns, costumes, drums and fifes, began their march. Morgenstreich filled the streets until after sunrise. At intervals, the groups paused to take a break for breakfast, and enjoy their own Fasnacht foods.

There are two parades–called Cortège– one on Monday afternoon and another on Wednesday, and following a set route. Costumes vary, from traditional Carnival characters with historical origins, to inventive creations depicting Fasnacht themes. The Cortège offers spectators a chance to see them all in full array, and in action.

Individuals and small groups of masked musicians wander Basel’s Old Town in the evenings and on Tuesday afternoon. Falling in behind a group and following the hypnotic beat as the players make their way along narrow lanes and alleyways is a fun way to take a time-out from the grand parading of Cortège. Known as Gässle, this provides an entirely different Fasnacht experience.

Brass bands are a relatively recent addition to Basel’s Fasnacht, but are now a major attraction. Players of Guggemusik bring loud, often discordant, flamboyance to the proceedings. The insistent rhythm often has spectators dancing in place, or following the groups as they take over Old Town streets on Tuesday evening.

Fasnacht lanterns, called Laterne, illustrate each Clique’s Sujet (theme) for the year. Lanterns are paraded through the streets at Morgenstreich and in the Cortèges, and exhibited in front of the Münster on Tuesday evening. They are hand-made, and many are works of art as well as satirical commentary.

Schnitzelbank singers are bards who dress in costumes and sing satirical verses (in dialect) on the themes of the year. I do not understand the local Swiss German but I still enjoy going to watch Schnitzelbank. A crowd of locals will listen to the first three lines and wait as the singer pauses. Then, when the punch line is delivered, everyone in the room cracks up laughing.

After every parade there is some trash; during Basel’s Fasnacht there are tons of trash each day. And each morning of the “three most beautiful days” the City of Basel street cleaners are out in force, collecting about 60 tons of trash–in 2014, about 250 tons of litter altogether! In true Swiss style, the cleanup is an well-organized ballet of men and machines.

Fasnacht ended at 4:00 am on Thursday. By 9:00 am, it was scarcely evident anything had gone on, the streets in the city center were so clean and neat. It took two more days for all of the benches and railings to be put back in place around town, but thanks to more than 100 machines and around 265 city workers, the Old Town was back to normal by the weekend, ready for the city’s next big event.

Through the lens: the characters of Basel Fasnacht