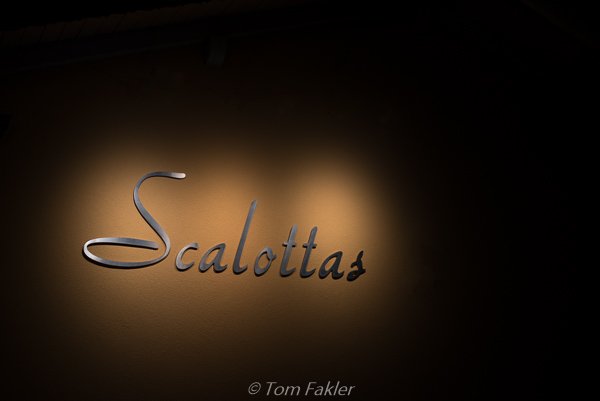 The two Scalottas restaurants in Lenzerheide are all about local food traditions, served up in two distinctively Swiss dining rooms in the same building. Each dining room is in fact, its own restaurant. Tom and I recently had the good fortune to enjoy two visits to Scalottas, where we experienced both restaurants, and reveled in the favorful creativity of an inventive Graubunden kitchen.

We were guests of Hotel Schweizerhof Lenzerheide. The Schweizerhof boasts five dining venues, but our aim was to visit the two newest of the lot, Scalottas Carn & Cashiel, open just one month, and Scalottas Terroir, serving guests since summer 2014. The two restaurants share a visionary head chef and a delectable dessert menu. However, they provide two entirely different dining experiences.

Scalottas head chef Hansjörg Ladurner invited us to visit his kitchen during dinner preparation. “We know the people who produce our food, know exactly how the animals are raised and where the vegetables grow,” he said, speaking enthusiastically about both of the new-concept restaurants he is shepherding along at Scalottas.

The newest dining venue at Hotel Schweizerhof Lenzerheide is Scalottas Carn & Cashiel (Meat and Cheese in Romansh), launched in December 2014. The rustic-modern restaurant is designed to bring the Swiss countryside to your table: cheese-making implements on the walls, a fondue pot ready on every table, and traditional alpine music–both alphorns and vocals–to accompany the meal. Regional beef, entrecote and ribs are served here, along with an assortment of fondues–twelve different fondues, in fact.

There is the familiar moitié-moitié, but alongside, others made with goat cheese, and fondues flavored with mushrooms, chiles or mountain herbs. The menu lists the ingredients for each one, along with the names of the dairy farmers supplying the cheese. This is know-your-supplier heaven!

Every fondue on the menu appealed, but as we only had one evening for this meal, we went for Scalottas One, a single-cheese fondue of Bergmatter, a seasonal cheese from the celebrated Willi Schmid dairy in Lichtensteig. 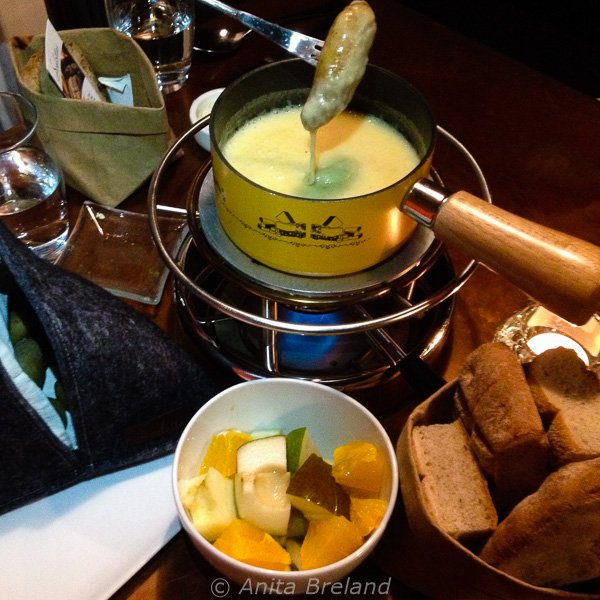 Bergmatter is made from the winter milk when cows are fed just hay, and is available only between July and February. Its producer likens the finish of this cheese to that of foie gras!

The wine used to make our fondue was “Goldrush”, a white wine produced by Gian-Battista von Tscharner winery in Reichenau.

In a surprising and delightful departure from tradition, we were provided with not only bread for dipping into the melted goodness, but also a little felt tent of boiled potatoes and a bowl of apple, pear and orange segments.

Having traveled this new path, I’ll look forward to having fruit with fondue again. And next time, I want to try a goat-cheese fondue.

Scalottas Terroir is a Swiss Stubli, housed in the nostalgic atmosphere of one of the oldest and most charming Arvenstuben (pine-panelled parlours) in Lenzerheide. It is also where “Mediterranean meets the Alps”. The food is prepared with Mediterranean flair, with all dishes served in appetizer-sized portions. Sustainability and local sourcing are key ingredients to every dish served here.

At Terroir, menus are priced per number of portions ordered to complete a meal (the norm for an average appetite is three dishes). In effect, guests create their own menu by combining whatever they like from the dishes on offer. It was hard to keep Tom from choosing three desserts, but in the interest of “research” he was persuaded to try a soup and main course, as well.

For soups, we tried a luscious combo: a cup of creamy porcini mushroom soup flavored with fresh thyme; and a cup of mountain hay-flower soup with croutons of crisped pear bread. Between courses, the chef sent out two small portions of a truly regional specialty, Capuns.

Desserts offered by the two restaurants are as regionally flavored as the rest of the food they serve. There are several rich combinations of cake or torte, with accompanying sorbets, eight ice cream and sorbet options served by the scoop, and a generous cheese plate. To finish our meals at Scalottas, we tried two sorbets, including one served as part of a dessert soup, and two scoops of ice cream. Every bite was a winner! Next time, I hope to find someone to share a cheese plate with me!

Local sourcing is a Swiss specialty. In a country where every valley produces its own delightful food products and every alp, a delicious mountain cheese, Scalottas takes the practice to sublime heights. Our meal at Carn & Cashiel provided our first opportunity to savor a fondue where the supplying dairy and vineyard were both credited. And at Terroir, it was great to order appetizer-sized portions, which made it possible to sample a broader range of the dishes on offer. We loved both Scalottas restaurants, and look forward to returning for another visit!

We visited Graubunden as guests of Switzerland Tourism, and in Lenzerheide, were hosted by Hotel Schweizerhof Lenzerheide. Thanks to Chef Ladurner for our glorious dinners at Scalottas!

To see all our travel stories from Switzerland, click here.