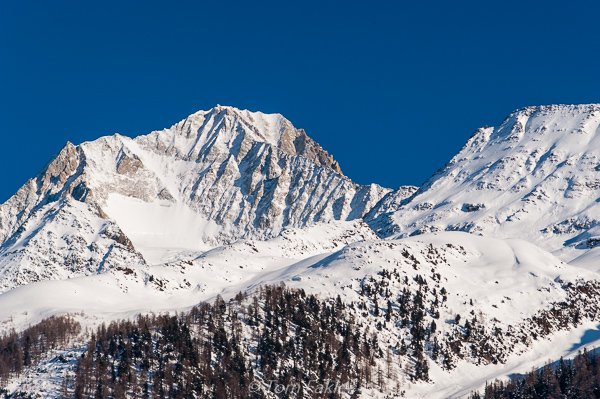 It’s February in Switzerland’s Lötschental, a long valley deep in the hinterlands of the Bernese Alps. Mountains are blanketed with white powder, and the ski slopes are busy. Behind the scenes, in the four villages of the valley–Wiler, Ferden, Kippel and at the furthermost end, Blatten–preparations are underway for Carnival, or Fasnacht as it is known hereabouts.

Carnival here begins the day after Candlemas (2 February) and ends on the night before Ash Wednesday. It is here, in this remote place, that we meet the Tschäggätta (plural Tschäggättä), at the center at one of the most unusual Carnival spectacles Tom and I have experienced.

The remoteness of the Lötschental was always a source for myths and legends, and the ferocious Tschäggättä figures are said to originate with these wild forms. According to legend, men called the Schurten thieves used to live in the woods on the shady side of the valley. These small, stocky men went out at night to rob passersby, dressed in a costume much like that associated with the Tschäggättä, complete with wooden masks and skins.

The Tschäggättä generally do not form into organized groups. Instead, these frightening figures wearing furs and carved wooden masks walk the streets, tossing soot at unsuspecting victims. The custom developed during the valley’s long history of relative isolation, though its exact origins are a matter of debate. Old as the custom may be, the first official mention of the Tschäggätta is in a church chronicle from the second half of the 19th century.

The Tschäggättä wear old clothes, with the lining turned outward. Sheep or goat skins hang front and back and cover the shoulders. Trousers are made of burlap potato sacks, held together with a large belt from which a cowbell may dangle. Tschäggättä wear mittens as well, knitted from leftover weaving yarns, and jute wrapped around legs and shoes. The aim is to present a wild and imposing impression–and to remain anonymous.

The key feature of a Tschäggätta however, is a an enormous wooden mask–oversized, grotesque and sometimes brightly painted– with fur on the back side. Local carvers make the masks from Arvenholz–similar to pine and easy to work with. Adornments can include cow teeth, horns, and wacky goat-hair hairdos. Tschäggättä carry a wooden staff called a Schtäkkun, which they flail madly for added effect.

In the past, only young men and bachelors dressed as Tschäggättä, although nowadays, girls and women can also take part. During the Carnival season, every evening except Sundays, these wild figures run through the valley, chasing anyone out on the streets. They also dance in a mischief-making parade from Blatten to Ferden, and join the large Lötschentaler Fasnachts parade in the village of Wiler. If you’re in the Lötschental, beware the masked bogeymen: the Tschäggättä have been known to come out by day, and have even been spotted on skis!

Curious? Then experience the living tradition first hand on 12 February 2015 at the traditional Tschäggättä parade or on 14 February 2014 at Lötschentaler Fasnachtsumzug:

Siren Call of the Luberon: Finding Bliss in Provence on a Luxury Tour gettingontravel.com/luberon/