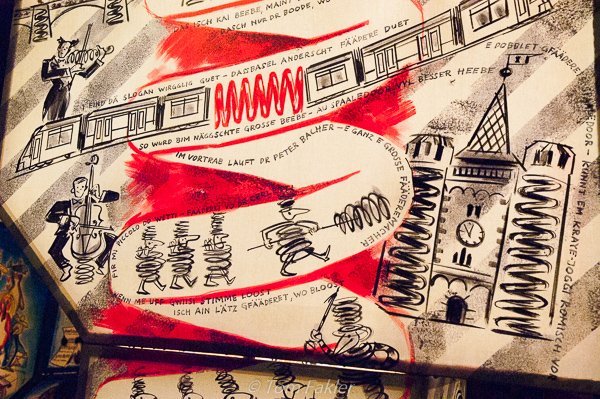 Basel Fasnacht, as Carnival is known here, is conducted primarily in Basel Deutsch, the local German dialect. In fact, many of the terms describing the people, events and history of Fasnacht are published in a curious mix of local Swiss German dialect and High German. This is the case even on official websites and in newspapers and other publications!

Helpless in the face of such linguistic confusion, I still think it can be useful for a spectator to become familiar with key terms associated with Basel Fasnacht. So, here is a partial list, in an alphabetically ordered scramble of Basel Deutsch and High German, with a brief description of each.

Chaise, or Schäse in dialect, are small carriages with 2-4 people dressed as “old aunts” distributing treats. Most of the carriage are horse-drawn and quite elegant.

Cliquenkeller are cellars owned, decorated and operated by cliques as bars and restaurants throughout Fasnacht. They are also venues for Schnitzelbank, satirical comedic performances on Monday and Wednesday evenings. They serve up food as well as jokes, and are decorated with all manner of signage, streamers and memorabilia of Fasnachts past. Cellars are situated beneath some of Basel’s most atmospheric medieval buildings and well worth a visit.

Cliques are officially registered groups, whose members march in formation at Morgenstreich and in the Monday and Wednesday parades. These groups meet throughout the year, both socially and to practice piping and drumming, and chose a Fasnacht theme each year. Joining a clique is a long-term commitment, and involves a considerable investment of both time and money. A Clique usually consists of a Vortrab (vanguard), the Pfeifer (pipers), the Tambourmajor (drum major) and the Tambouren (drummers).

Comité, or Fasnachts-Comité, is the official organizing body for Basel Fasnacht. The Comité is the contact point for all questions concerning Basel Fasnacht.

Cortège are the parades taking place on Monday and Wednesday afternoon, following defined routes. Members of the Fasnacht-Comité, the official carnival organization, have viewing stations where the various marching groups stop and perform.

Gässle refers to the custom of wandering through the narrow lanes and alleyways of Basel’s Old Town, marching to the hypnotic beat of the small and large troupes of piccolo players and drummers. It’s great fun to fall into step behind a group and see where that takes you!

Gugge (brass bands) participate in Monday and Wednesday parades and hold an evening of Gugge-Concerts on Tuesday.

Larvae are the masks worn by Fasnacht participants as part of their costume. A Larve provides full cover, and enables the wearer to remain incognito during the festivities. Traditional masks recall Napoleonic soldiers, harlequins and Waggis, but following the themes of a clique, they can represent just about anything.

Laterne, or Zugslaterne (parade lanterns) are wheel-mounted or carried by 2 to 4 people in front of the Cliques as they march at Morgenstreich and in the cortège. The lanterns are beautifully painted with the clique’s satiric themes and verses. Said to represent the fire rituals associated with the end of winter, some are still lit with gas flares. Since the 19th century, it has been the practice for cliques to position their lanterns in the Old Town, ready for the 4:00 clock kickoff of Morgenstreich. The lanterns, still veiled, are serenaded by piccolo players on Sunday afternoon in a ritual called Ladärne yynepfyffe or “piping the lantern”. In the world’s largest temporary open-air art exhibition, lanterns are dramatically displayed from Monday evening until Wednesday morning on the Munsterplatz.

Morgenstreich, or Morgestraich in dialect, marks the beginning of Carnival in Basel, at precisely 4:00 am on Fasnacht Mondy, with the command “Morgestraich, vorwärts marsch!” (“Morgestraich, forward march!”) from the drum majors. All Cliques begin to march and play their instruments, and parade their lanterns through darkened city streets. Although there are marchers all over the city’s Old Town, the heart of Morgenstreich is a triangle bounded by Schneidergasse, Spalenberg and Rümelinsplatz.

Cliques march in military formation: First, the so-called “vanguard” of marchers, with the great parade lantern representing the group’s satirical subject, followed by pipers and drummers, masked, costumed and wearing a head lamp. No Gugge music is played during Morgenstreich.

Morgenstreich runs until after sunrise, after which it is tradition to eat out at one of the many restaurants or open clique cellars, most of which remain open for the entire 72-hour run of Fasnacht. The traditional foods for this meal are Mehlsuppe (flour soup), and onion and cheese tarts.

Plakette, or in dialect, Blaggedde, is the Carnival badge, carrying the year’s overarching Fasnacht motto. Plakette are sold by the various Cliques, and worn by participants and spectators alike.

Confetti, in dialect, Räppli, is used for Fasnacht in great quantities: thrown everywhere, put down the shirts/coats of spectators not sporting Plakette, and shot from cannons by Waggis. Sold in packets of one color only, and named after the smallest Swiss coin, Räppli replaced the earlier sugar balls once tossed into crowds during Fasnacht parades.

Schnitzelbank singers are bards who dress in costumes and sing satirical verses (in dialect) on the primary themes of the year. First mentioned in the 19th century, these performances have roots in the sardonic street ballads of the 16th century. Schnitzelbank singers perform in restaurants and bars on Monday and Wednesday evenings, and in Cliquenkellers on Tuesday evening.

Schyssdräggziigli are the individuals and small, informal groups who wander the streets of the Old Town during Fasnacht. Like the Cliques, they play music with piccolos and drums.

Sujet , or the themes of Fasnacht, are chosen by the Cliques, based on recent events–political, social, cultural–and can be seen on lanterns during Morgenstreich and in the costumes worn by Clique members during the Cortège. Basel Fasnacht is themed satirically: anything that went wrong in politics, culture and society over the past year is fair game, and reflected in individual Cliques’ costumes, lanterns and props .

Waage are the large trailers (propelled by trucks or tractors), carrying characters called Waggis who throw oranges, sweets, flowers and other treats to the crowd. Some of the trucks and props are displayed on the Kasernenareal from Monday night to Wednesday morning.

Zettel, or Zeedel in dialect, are flyers containing ironic verse and distributed by clique members as they march through town.

Through the lens: the characters of Basel Fasnacht

The characters of Basel Fasnacht