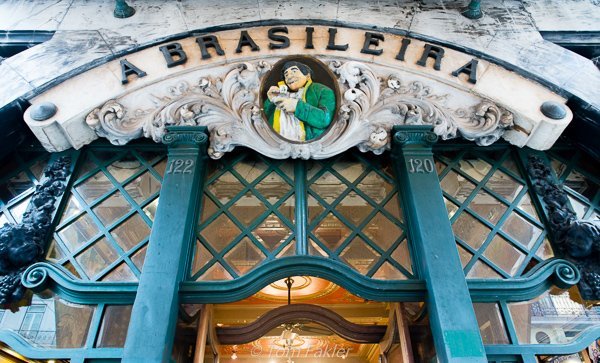 Portugal surprised me with its coffee. My coffee experiences–at breakfast, on break or after dinner–were generally great, all over the country. From Guimarães and Porto in the north to coastal Algarve in the south, I enjoyed the coffee. Even small Cafés boast an impressive Italian espresso machine, and with apologies to Italy, a Portuguese espresso often seems to better its Italian namesake.

It was a special treat, then, to meet the father-daughter team responsible for one of the country’s leading family-owned coffee companies, and learn more about Portuguese coffee.

Cafés Negrita was founded In 1924 by Anibal Antunes, in partnership with several friends, including the father of Carlos Pina. They housed the company in a former horse stable that belonged to a mansion in the heart of Lisbon, after the family acquired its first car, and the space was no longer needed for carriages. Cafés Negrita continues to operate from its original location. Its primary activities are roasting, grinding and packaging coffee and grains, such as barley.

Carlos Pina, still vital at 88 years of age, has been involved in coffee, and with Café Negritas, for his entire career. His daughter Helena trained as an environmental engineer, and worked in a bank before joining the family business almost two decades ago. Innovations under the leadership of the father-daughter team have included automating the roasting process and revamping business lines for the company. Some lines of business, such as sales and delivery of fruit and vegetables, have been discontinued. Others–packaging of durable food items, such as sugar–have been expanded. The company also mills and markets an array of spices, from cinnamon and curry to piri-piri and peppers.

A taste for robusta

For many years prior to the 1974 revolution, Portugal’s palate for strong, full-bodied coffee was trained by almost exclusive use of robusta beans sourced from Portuguese colonies. As a consequence, the Portuguese long favored the distinctive earthy flavor and slight bitterness of robusta over the smoother taste, lower acid and rich flavor of arabica. With internationalization of coffee practices, though, this is changing, albeit slowly.

Cafés Negrita processes up to 2,000 kilos of coffee beans per day. The time required to roast the beans varies according to the season and humidity, the target temperature individually specified for customers, and the type and maturity of the beans. About 20% of the weight of the beans is lost in the roasting process, with 60 kilos delivering 48-50 kilos of beans for packaging.

Coffee stores around Portugal offer the balâo de café for sale. These revered instruments have been used for generations to brew coffee slowly, cup by cup. As automated brewing devices have become ubiquitous in Portuguese homes, the old way of preparing coffee with a balâo and sharing it with family around a holiday table after a feast has receded into a childhood memory for many people. Carlos Pina invited us to join him in a cup of coffee, which he prepared with the balâo, and we happily accepted.

Our host chose Costa Rica arabica beans for our tasting. They roasted for six minutes, the aroma deepening as they whirred in the little machine. First came a whiff of chocolate, then caramel, then the aroma of toasting flour as the hue of the beans darkened. Just before the beans reached the cool-down phase necessary for grinding, a powerful aroma evoked “Breakfast!”, a scent that promised a full-bodied cup.

Stay tuned for more about coffee in Portugal!

Thank you to Aptece, the Portuguese Culinary Tourism and Economic Association, and Turismo de Portugal, for making our travels in Portugal possible. Thanks too to AICC (Portugal’s commercial coffee association) for introducing us to Carlos and Helena Pina!