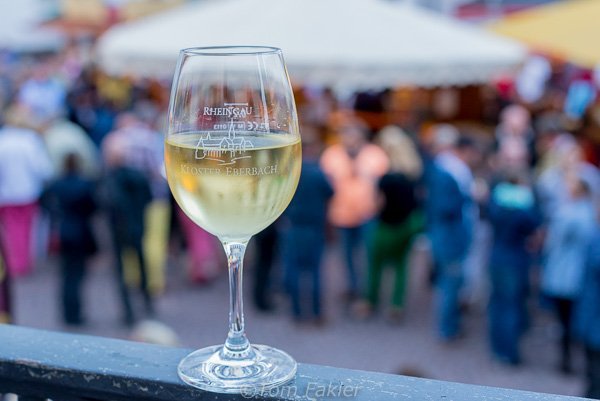 “Wine–enjoyed in moderation–heals and comforts with its strength and warmth.” These words from the 11th-century Benedictine nun Hildegard von Bingen ring true year-round in Germany’s Rheingau winegrowing region. Once a year, though, they resonate more than usual in the former spa town of Wiesbaden, when the beautiful little city sets up the “world’s longest wine bar” in its historic center, and showcases the wines and culinary specialties of the area’s vintners and food producers.

The Rheingauer Weinwoche, begun as a promotional event by the winegrowers of the Rheingau region, is now Europe’s biggest wine festival, attracting more than ten million visitors per year over a ten-day run. At about 100 stands, winegrowers present their products, accompanied by a variety of culinary specialties of the area. When my husband and I visited the festival, we felt right at home, alongside groups of friends and families getting together over a glass or two of Riesling (and I spotted a couple of beers, as well) to enjoy a long summer evening. The mood was amiable, the pace unhurried.

Best of all, the wine was really, really good!

With more than 100 wine and food stalls, a Rheingau festivalgoer is spoiled for choice. Tom and I enjoyed a light dinner at nearby Lumen, before making the rounds of the festival’s wine stands. There, we tried two Rieslings and a red, starting at the stand of Weingut Alois Dahn, named one of Germany’s best wine producers by Gault Millau. The Riesling we sampled was fresh and redolent of stone fruits, but a bit sour on the tongue for my taste. It would be worth trying a second offering–perhaps one of the vintner’s highly regarded reds, from what was clearly a very popular stand in the Weinwoche line-up. Next time!

This year’s festival included a stand from Wiesbaden’s twin city of San Sabastián, Spain. There, the family-owned Bodegas Mitarte presented a selection of wines from its 45-hectar vineyard, featuring grapes pressed in ancient caverns using traditional methods. There were whites and a rosé on offer, but as red wine fanciers, we could not resist the Mitarte Reserva (2009). Spicy, with notes of toast and minerals, our sample had sublime mouth feel and harmonious tannins. In a word: sublime.

We sampled a fine Weisbadener Neroberg Riesling: it was mellow, soft on the tongue, with floral notes and a long finish. What a treat to discover for ourselves that the only true Wiesbaden wine is so good! 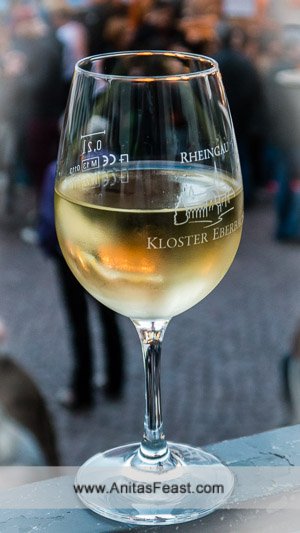 The Rheingau is just one of Germany’s 13 designated wine-growing regions, and there are hundreds of wine festivals through the summer and harvest season. If you like what you taste in Wiesbaden, consider the region a German wines “starter kit” and explore farther afield!

We attended the Rheingau Wine Festival as guests of Deutsche Bahn and Wiesbaden Marketing, with great accommodation in Wiesbaden provided by the Hotel Oranien.

Beat the chill with Baeckeoffe, an Alsatian classic