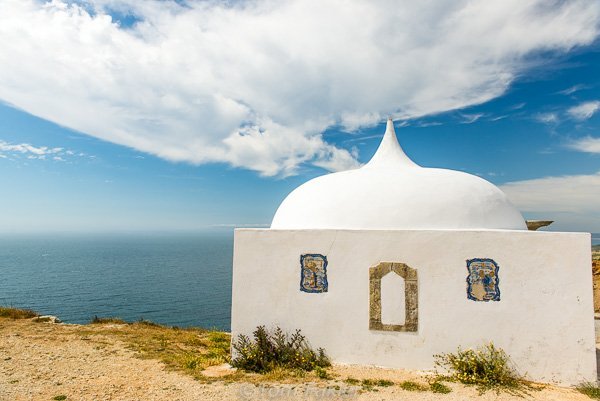 At the beginning of the 20th century, Portugal’s fishing industry was centered in what is now the Peninsula of Setúbal. The sardine factories have moved elsewhere since then, and nowadays the district’s ports–along with a stunning coastline and the hilly countryside–serve tourism. After traveling around Portugal for several weeks, Tom and I chose Setúbal as our base for exploring new territory within easy reach of Lisbon.

Attractions of Setúbal city include a pedestrianized Old Town and a hilltop fortress, with a view over the Sado estuary. The main draw for Tom and me, though, was the seafood, such as choco frito (fried cuttlefish) with excellent local white wine, in one of the many restaurants with outdoor terraces lining Setúbal’s Avenida Luísa Todi .

One of our biggest culinary surprises of the entire trip also happened here, in the form of locally cultivated oysters. The ones we sampled did not come from a restaurant, but were minutes-old fresh from the hands of Célia Rodrigues, a scientist helping develop Portugal’s nascent oyster industry. “The bivalves are part of the country’s gastronomic patrimony!” she says. To prove her point, Célia opened a few for us, and served them with just a splash of lemon. They were every bit as tasty as promised.

The many wines of Setúbal

After more than a month in Portugal, we knew to expect good wine at good value, anywhere in the country. What came as a bit of a surprise for us, though was the number and variety of wines produced in such a small wine-growing area as the district of Setúbal . When we stopped in at the Setúbal Tourist Office, we were met with an entire room stocked with wines just from Setúbal! Who knew?

The wine estates of Setúbal produce red varietals from both national and international grape blends. Whites are made with predominantly the traditional Palmela white varieties. The well-known Moscatel de Setúbal is a fortified wine in a lightly sherried style, ranging from semi- to fully sweet.

To see where producers are located, and learn more about Setubal regional wine designations, visit Vine to Wine Circle.

Azeitão cheese, at the source

Azeitão is an unpasteurized sheep’s milk cheese hand-crafted at the foot of the Arrabida Mountains in the regions of Setúbal, Palmela and Sesimbra. Production began when a shepherd brought his sheep to Azeitão from Serra da Estrela, along with a recipe for making that region’s cheese. Azeitão is made with the same techniques as its famous kin, but is produced in rounds weighing no more than 250 grams. The curds are thickened with vegetable rennet derived from artichoke thistles and the cheese has an affinage of 20 days. To qualify for DOP designation, Azeitao must be creamy and buttery, an outcome requiring cold humidity to achieve.

We took time out from our gustatory pursuits to take in some of Setúbal’s dramatic scenery, following a circular route that took us through the Arrábida Natural Park and back to Setúbal city along the peninsula’s southern coast. With Taste of Lisboa as our guide, we visited Cape Espichel on Setubal’s southwest coast.

The cape is a place of dramatic beauty. In a country known for its stunning coastal vistas, the cape delivers a special punch from its windy promontory: spectacular cloud formations above precipitous cliffs. Its original function was defense, but in 1701, the Church of Our Lady of the Cape Espichel was built, its sanctuary flanked by lodgings for pilgrims.

Our thanks to APTECE, Portugal’s Food Travel Association for bringing us to Portugal, and Taste of Lisboa for a marvelous introduction to surprising Setúbal!