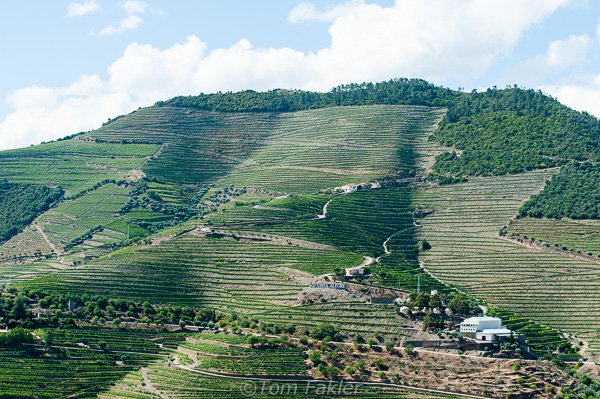 “Wine is not about grapes!” exclaimed Alvaro. Our host was oblivious to threatening rain on this steeply pitched hillside above Portugal’s Douro River. I struggled to keep up–and upright–as we charged along the narrow trenches between rows of closely planted vines. We were exploring one of the earliest Port wine estates in the Douro Valley. Our tramp through the vines turned out to be a study in passionate agronomy.

Port wine owes as much to the rigor of cultivating these mountain vineyards, as it does to the aging process that takes place in the Port wine lodges of Vila Nova de Gaia. History matters here. “We don’t understand the new world if we don’t understand the past,” Alvaro insists us as we tour the estate in his truck.

The borders of the Alto Douro Wine Region–inscribed on UNESCO’s World Heritage List in 2001–follow a natural boundary between the schist of the demarcated region, and the granite of the landscape around it. Wine has been produced here for some 2,000 years and this, along with time-honored farming methods, is a key element of the cultural landscape. Red and white wines are produced here, too, but it was Port that brought Tom and me to Pinhão.

The deep, inter-connecting valleys of the Douro Wine Region have a classic continental climate, with bone-chilling winters and hot, dry summers. The combination of mountain, altitude and exposure–which includes 2500 hours of sun per year–conspire to produce what local vintners call “our gold”. Douro vines have to be hardy to endure nine months of winter and three months of hellish heat (42 degrees Celsius in the shade). The free-draining schistous soil helps them succeed.

“Extreme quality comes from our natural conditions,” Alvaro tells us. To generalize, May has moderate temperatures, some wind and sun, but no rain. This is the time for flowering. June is cooler with some rain, and by July grapes are full on the vine. August is cooler yet in the evenings, with a lot of rain. Alvaro offers a local saying: “Hot in the day, cold in the night; use a jacket in August, it’s a great year for wine.” In September, after the rains, it’s time for harvest.

Quinta das Carvalhas has a long history, with written references traced back to 1759, just three years after establishment of the Douro as the world’s first demarcated wine region. Prominently positioned on the left bank of the Douro River facing Pinhão, the estate is the largest in the region, covering the hillside and extending over the summit. The quinta welcomes 15,000 visitors each year, and aims to promote understanding of traditional Port wine cultivation.

Over the last decade, Alvaro has managed a large-scale project to create an exemplar of the plants, stones and water of the Douro. “I want my quinta to be an experience about the people, the flowers and forests, the history and the river, too,” he says. “This farm must represent the Douro Valley in all its aspects.”

At Quinta das Carvalhas, four varieties were planted side-by-side almost 100 years ago, at an elevation just above the river. There, with a southern/western exposure and a concentrated environment, they experience extreme maturation, rather than the equilibrium desired for table wines. The planting, care and harvesting of these vines are all done by hand.

Traditional cultivation of vines for making Port invokes an array of grape varieties known only in the Douro, and there are many of them. These sturdy plants are nurtured, but not irrigated. To the vintner, they say “Don’t touch me please, I’m happy” as they mature the seeds for the next generation. There’s Roufette, lady-like and elegant; Sosão, manly, strong, and muscular; Tinta francesca, elegantly feminine, a delicate vine producing no more than 0.7 kilos of grapes per season; and the unifier, Flor do Douro, which is less exciting, perhaps a little like a marriage (Alvaro’s words, not mine!). In the end, he insists, the best Port wines come from the old vines.

Ah so. Wine, at least old Port, is about the vines. Even now, as new blends are created from the many grape varieties here, it’s all about locating, grouping and nurturing the vines in a unique environment. But that’s another story.

From tasting to feasting

Walking through the historic vineyards of the Alto Douro with someone so passionately engaged in preserving the region’s traditions was a highlight of our travels in Portugal. As newcomers to Port wine, we had enjoyed several glasses before visiting the Pinhão estate, including a tasting at Real Companhia Velha’s cellar in Vila Nova de Gaia, and a superb vintage Port from a very good year (1997) at our hotel in Lamego. Our day with Alvaro turned those samplings into a memorable feast of history and tradition.

Quinta das Carvalhas and many other quintas are open to the public. There are Port tours and tastings aplenty in the Douro Valley, available through tour operators. For the independent traveler, options for the various Douro Valley quintas, including Quinta das Carvalhas, are also offered via a recently launched wine Portal, Wine Tourism in Portugal. I’ve not booked through the Portal, but it looks promising!

Thank you to APTECE, the Portuguese Culinary Tourism and Economic Association, and Turismo de Portugal, for making our travels possible.