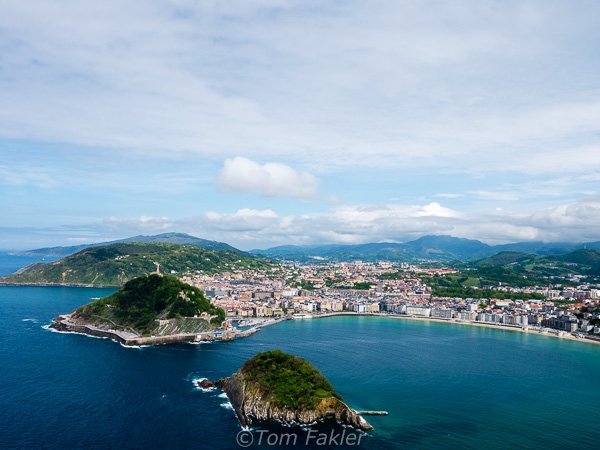 We had just one night to spend in Basque Country en route from Switzerland to Portugal last month, and opted for scenic San Sebastián (Basque: Donostia). Short on time and energy after a day’s driving, we still found plenty to make some good memories. Here are five suggestions for enjoying an overnight in San Sebastián as much as we did.

San Sebastián curves spoon-like around two small bays, and there are wide beach-side promenades on both of them. We watched surfers wait for turquoise waves to crest, jostled for space with joggers and other strollers, and got in some quality people-watching. Before- and after-dinner walks along the two promenades gave us time to stretch our legs and admire the city’s great architecture.

The city’s ancient quarter is small, its tiny pedestrian streets squashed into a small peninsula topped with a woolly green hillock. There are plenty of tourists here, as well as locals–kids kicking balls in the squares, their parents gathering under a late-afternoon sun for a drink and a chat, ice cream and cake vendors doing a brisk business.

Legions of Basque-styled tapas bars are open before most restaurants hit their stride. We were able to eat early, feel like a local, and still get to bed in time to get plenty of rest before our onward journey. We sampled pinxtos at two of the most acclaimed pinxto restaurants: Ganbara and Txepeta (Spanish).

San Sebastián has two mountains that provide an airy perspective of the city and its bays: Monte Urgull and Monte Igueldo. We had a car, and opted for the 17-minute(!) drive from the center to the summit, and spent a pleasant hour getting fresh air and superb views. There is also a trail up to the summit, and a funicular.

The tower, originally built as a marine watchtower in the 18th century, is an easy climb of 106 steps to the roof terrace, and delivers grand views. We set our GPS for Monte Igueldo on our way into town, before we’d stashed the car (The jaunt can be done via public transport, but would would require more time than we had available.).

We stayed at the intimate Pension Grosen, within easy walking distance of the old town, the beach, and breakfast (the place has just five rooms, and is well-priced, but does not offer breakfast on the premises).

We had another chance to get out for a walk before collecting the car from overnight parking in a nearby garage, and joined locals for a Spanish breakfast at Salt (Spanish) before our onward journey.

We would have loved to try for a reservation at one of the city’s two restaurants recently named to the world’s top 50 list, and to visit some of the area’s fine museums, but there just was not enough time. Hopefully, when we pass through Basque Country again, we will be able to linger in San Sebastián for a more in-depth visit. We would also love to visit the art Mecca of Bilbao, and spend some time exploring Vitoria-Gasteiz, this year’s Culinary Capital of Spain.

So much yet to see in this corner of Europe!