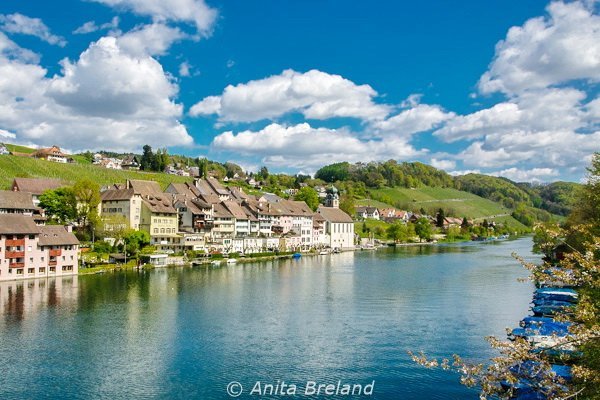 When Tom and I paid a spring-time visit to Eglisau in Canton Zurich, we felt we had stepped into a medieval time capsule. There, in a half-timbered house beside the Protestant church, we found uncluttered elegance, creature comforts and not one, but two fine restaurants. Under puffy clouds and sunlit buildings with reflections shimmering in the Rhine, we settled in for two sublime nights.

Romantik Hotel Gasthof Hirschen has welcomed guests since the 16th century. The building is integrated into the lowest row of houses along the river, and has been expanded and renovated several times. This is a living museum, and we looked forward to sampling food from the Michelin-starred kitchen of Christian Kuchler, a rising star on the Swiss culinary scene.

In 2000, Werner Dubno, textiles entrepreneur and a highly regarded collector of antiques, purchased the Gasthof Hirschen. He brought to the project a deep knowledge of historic renovation and an appreciation for architectural style. He worked with expert craftsmen to give the inn new life, while preserving its character. Both the Canton of Zurich and the Swiss Confederation have declared the building a historic monument.

Guests of Hotel Gasthof Hirschen shelter in a 16th-century inn redone for a modern era. Sleeping rooms are meticulously furnished with modern beds fitted with crisp, high-thread-count linens. Antique wardrobes, desks and occasional tables contribute to the individual character of each. Bathrooms are contemporary in design, enormous and well-lit. Ancient doors have been left in place and fronted with glass ones, turning unoccupied rooms into pop-up museum displays you can visit simply by climbing the stairs. The effect is stunning.

Our room overlooked the Rhine, as most rooms at Gasthof Hirschen do. A planked floor tilted steeply toward the building’s central stairwell, slanting as in any medieval building. Thankfully, the bed and wardrobe had been leveled, so we weren’t sleeping up- or downhill!

The hotel’s claim to culinary fame rests with its premier restaurant, La Passion, where we dined on our second evening at the hotel. But there is another restaurant at Gasthof Hirschen, served from the same kitchen. The Bistro, Gasthof Hirschen’s glassed-in casual restaurant, opens onto a riverside terrace. It has an extensive menu and daily specials, and is where hotel guests take breakfast. It is open for lunch and dinner.

For our meal at the Bistro, we chose the Menu Surprise, which by definition means we left our plates in the hands of the kitchen and our waiter, who made good work of wine pairings for each course. The meal was memorable: out-of-the-garden fresh ingredients, lively sauces, contrasting textures and complementary seasonings.

Every season, a reason to return

Gasthof Hirschen is an intimate establishment where details matter, where every door knob and clock, every painting, is part of the back-story. The setting and exquisite ambience, combined with an innovative kitchen call out for a return visit, for another Menu Surprise in another season. I can’t think of many places better for celebrating a special occasion, a birthday or an anniversary. Hint, hint, Tom!

Romantik Hotel Gasthof Hirschen became a member of Swiss Historic Hotels in 2008, and in 2009, was named Historic Hotel of the Year by Icomos (in German). For more about the four-year restoration and its importance, read this story in Tages Anzeiger (in German). I’m not the only one to think the hotel offers time travel at its best, and a feast for all the senses!

Many thanks to Switzerland Tourism and to Swiss Historic Hotels for hosting our visit to Hotel Gasthof Hirschen, and to everyone at the hotel for making our stay so enjoyable. The wonderful memories are all ours!

A cozy retreat in Brigels, Graubunden

Terrasse am See: a lakeside escape to Vitznau, Switzerland