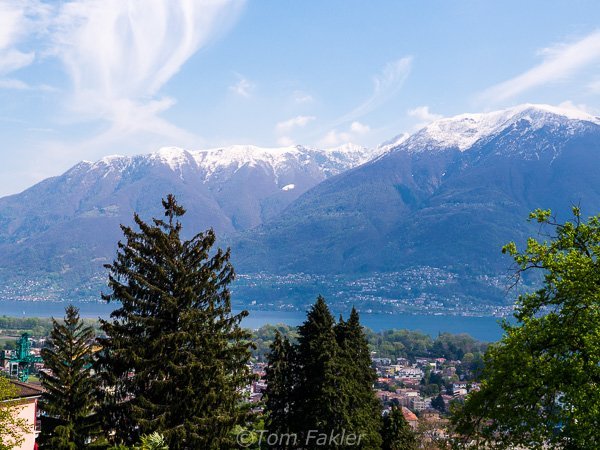 At the beginning of the 20th century, a hilltop in Ascona, Switzerland became a center for unconventional idealists and reformers. Theosophists, writers, visual and performing artists–kindred spirits seeking a simpler lifestyle and unfettered pursuit of their craft–came together in a community that offered both. Last week, Tom and I were thrilled to spend a couple of nights soaking up the vibes of those early free-thinkers, along with some incredible views.

A place of power

Monte Verità, the ‘mountain of truth’ in Switzerland’s canton Ticino, is a place of special energy and an architectural landmark. The Ascona region and Monte Verità in particular have been defined as ‘power places’ by researchers and scholars, as well as by the founders of the colony, who gave the hill its name.

Long before counter-culture winds swept America’s university campuses in the 1960s, a small group of well-to-do naturists established a colony here, upending social norms in pursuit of a common ideal. Ida Hofmann, pianist and feminist leader, Henri Oedenkoven, the son of an industrialist, and the brothers Karl and Arthur Gräser considered their cooperative an alternative to Capitalism and Communism–a new, individualistic way of life that included vegetarianism, sun-bathing and eventually a sanatorium. The community in its initial form lasted just twenty years, but it hosted some of the best-known artists and writers of the early decades of the last century.

An exhibition, Le mammelle della verità (“The Breasts of Truth”) was created by Harald Szeemann in 1978 to present the history of Monte Verità. Szeemann’s installation will be the centerpiece for a new Monte Verità Museum housed in Casa Anatta and other buildings on the property.

In 1926, Monte Verità was acquired by Baron Eduard von der Heydt, banker to German Kaiser Wilhelm II. The baron was a colorful character: a Nazi party member who eventually became a Swiss citizen, he was a passionate collector of non-European art (the brilliant Museum Rietberg is built around von der Heydt’s bequest to the City of Zürich).

Upon his death in 1964, the baron left the entire complex, including about 500 works of art, to the Canton of Ticino. Ownership was later transferred to a foundation, which still manages the property.

The Monte Verità museum is closed at present, its buildings accessible only on guided tours. Buildings on the property are scheduled to re-open over the next two years, with Casa Anatta as its centerpiece.

Albergo Monte Verità is often filled with conference-goers during the week, but also offers much for the individual traveler. Tours of the premises and nearby places of power, tea ceremonies, and evening events such as lectures are offered throughout the year.

Weekends are an ideal time for a Monte Verità getaway. It is possible to stay in the Bauhaus Hotel, or in one of several other buildings on the property. An open-air restaurant offers local produce, well prepared, and the breakfast buffet is generous.

Albergo Monte Verità became a member of Swiss Historic Hotels in 2008, and in 2013, was named Historic Hotel of the Year by Icomos.  The hotel is a unique destination–just a short way up the hill from Ascona, Monte Verità offers an escape to another time, as well the peace and balance of natural surroundings.

Thanks to Switzerland Tourism and to Swiss Historic Hotels for hosting our visit to Albergo Monte Verità, and to Foundation CEO Lorenzo Sonognini and his staff for sharing their passion and knowledge of this special place with us!