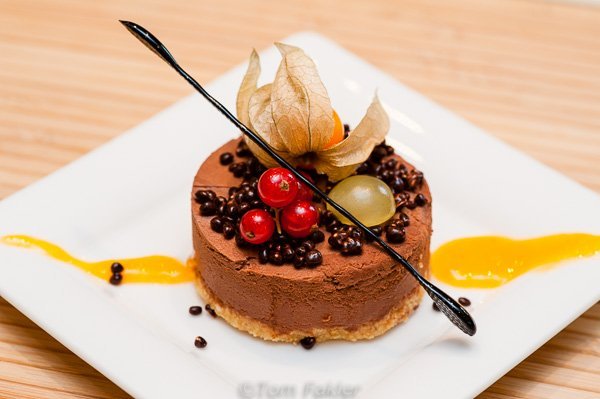 In December, I spent a snowy day in the hills above Turin, in the immaculate kitchen of La Maggiorana School of Culinary Arts. Chefs Erica and Camilla took me through the preparation of a meal that was as inviting to look at, as it was delicious.  Before we were done, they had served my husband and  me a seasonal four-course menu featuring local ingredients, imaginatively combined.  Companionship in the kitchen and superb food on the table left us with memories that will last.

With Erica and Camilla, I had a chance to experience firsthand how to wrangle an artichoke, and exactly how hazelnut dough for a fine dessert should feel, and more. Any cook who has struggled to create perfectly textured and supple dough, can perhaps appreciate my greatest achievement of the day: rolling puff pastry to a translucent thinness, and learning to wrap it, for a dish of shredded beef baked in a pastry crust.

The women are carrying on a noble family tradition begun more than a century ago, with the biscuit factory of  Ermenegildo Maggiore, Erica’s grandfather. Her mother Elena was Italy’s first female Cordon Bleu-trained chef, and founded La Maggiorana in 1973.

At 19, Erica became  Italy’s youngest Cordon Bleu-trained chef, and has now taken the reins. For Camilla, a graphics designer, the move to La Maggiorana was a natural–perhaps genetic–progression.

The goal of this mother and daughter team is to instill in students their passion for creating flavor-filled; beautiful food from high-quality ingredients.

The hallmark of the school is the quest for balance, a blending of innovation and tradition. I loved the melding of flavors and textures in each dish, the use of local, fresh ingredients, and the culinary wisdom and passion of both women. However, I must admit that the attention to detail at each step along the way was daunting. This is food styling!

Turin’s first cooking school has evolved to reach a broad clientele. Classes in food photography and finger foods share the calendar with sessions on traditional preparations for risotto, soups and grains. Local specialties are represented, and traditional dishes treated in ways befitting a new century.

Erica and Camilla impress with their culinary wisdom, attentive manner and high energy. They are finely attuned to working together, practically pirouetting across the kitchen to stir a pot, explain a maneuver or crimp a pastry corner–always on the move, never a wasted motion. Even mostly observing, I was exhausted when the day was done. I felt as though I’d had a part, albeit small,  in birthing a culinary sonata.

A La Maggiorana student cannot help but come away with a heightened enthusiasm for the culinary arts, at their most artistic! Watch the video on their home page to see a culinary artist in action (12:06)!

Many thanks to Torino Turismo e Provincia, who hosted our stay in Turin, and to chefs Erica and Camilla of La Maggiorana School of Culinary Arts for a magical day. The enjoyment was all ours!