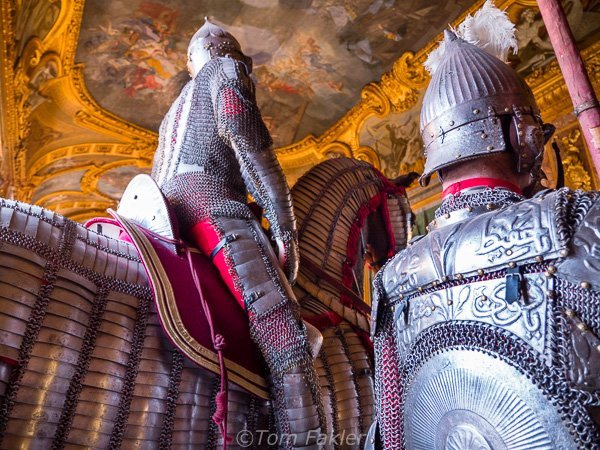 The Merenda Reale, held the last Saturday each month in one of Turin’s ornate royal residences, is a re-enactment of a decidedly over-the-top royal tradition from the 17th to 19th centuries. My husband and I were invited to Turin for the November Merenda, this one held in the magnificent Palazzo Reale. A ramble through the palace gave us a chance to admire princely treasures and preoccupations–from armor (for men and horses), to inlaid parquet floors and gilded, frescoed ceilings.

The Royal Palace of Turin

Construction of the Palazzo Reale was begun at the beginning of the 17th century, when the ducal capital of the House of Savoy came to Turin from Chambéry, in France’s Rhône-Alpes region. Continually transformed and enlarged as the Savoy dynasty grew in power, the Palazzo was greatly embellished when Vittorio Amedeo II became king in 1713, and employed Filippo Juvarra, the prolific architect and stage designer.

After the Kingdom of Italy was proclaimed in the 19th century, and the capital transferred to Florence, then to Rome, the Royal Palace lost its importance. The last, minor, alterations were made by Queen Margherita at the end of the 19th century, and by Crown Prince Umberto when he revived the Palace in the 1920s and 30s.

Visitors enter the Royal Palace via a monumental staircase, exquisite in its artistry, elegance and evocation of power. The layout, paintings and statues celebrate the Savoy dynasty on the occasion of the ascension to the throne of Italy of Victor Emanuel II, son of Charles Albert, in 1861 after the unification process. 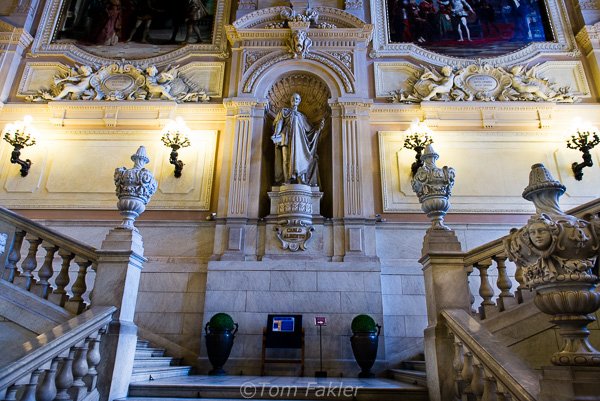 Hall of the Swiss Guards

Originally called the Hall of the Saxon Glory because its 17th-century frescoes depict descent of the House of Savoy from Saxon Leader Widukind, the room was renamed the Hall of the Swiss Guards, in honor of a nearby military garrison.  Impressive yes, but to me, the room is cold and cheerless, a let-down after the amazing entrance, giving no hint of the colorful exuberance to come. 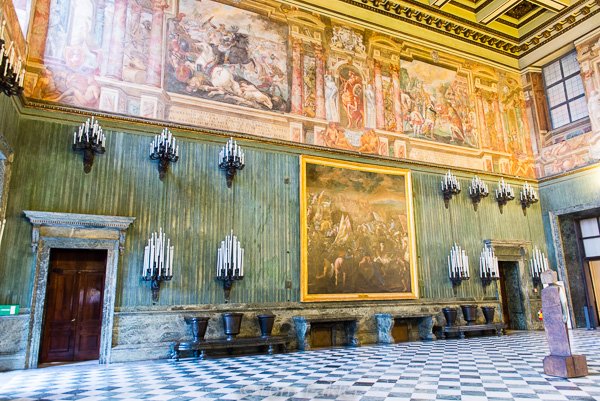 From 1831, this chamber served as the King’s throne room, the center of ceremonial activity for Carlo Alberto’s Royal Palace. I was surprised at the modest size of the throne, set on a dais fronting a faded wall covering and velvet drapes, but loved the intricate parquet flooring. 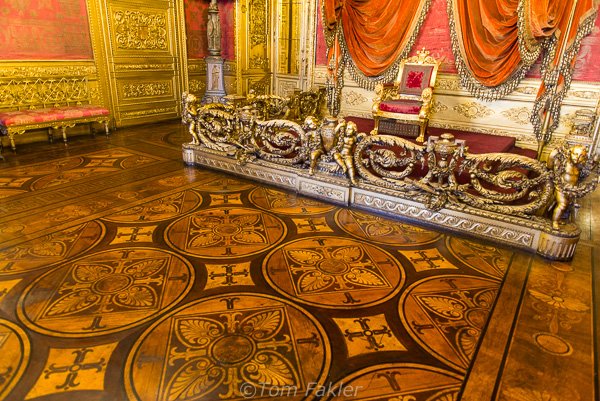 The former bedchamber of Duchess Maria Giovanna Battista was used by Carlo Alberto to preside over the Council of Ministers and it was here that on 4 March 1848, he signed the Statuto Albertino, which led to declaration of statehood for Italy. The room has another name, too: the Room of the Blessed, from the portraits of Savoy family members who “died in the odour of sanctity”. 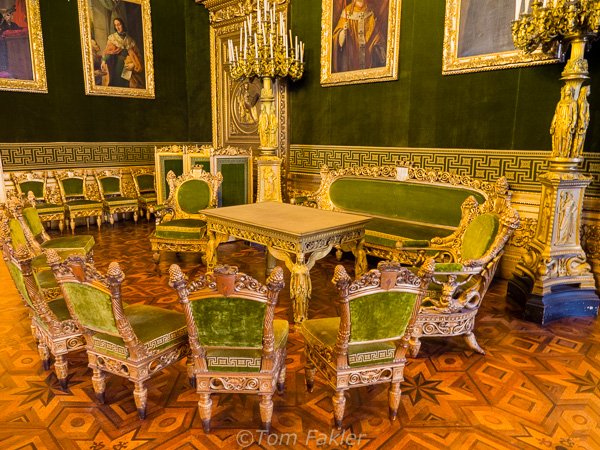 The ballroom, decorated in the mid-19th century with gilded papier-mâché rosettes and a frieze inspired by decorations discovered during the excavations of Pompeii and Herculaneum, celebrating the theme of dance. The whole evokes a Greek temple, with columns and bronze-framed mirrors reflecting the light from Bohemia crystal chandeliers. Even now, the fabulous parquet floors look polished for a party! 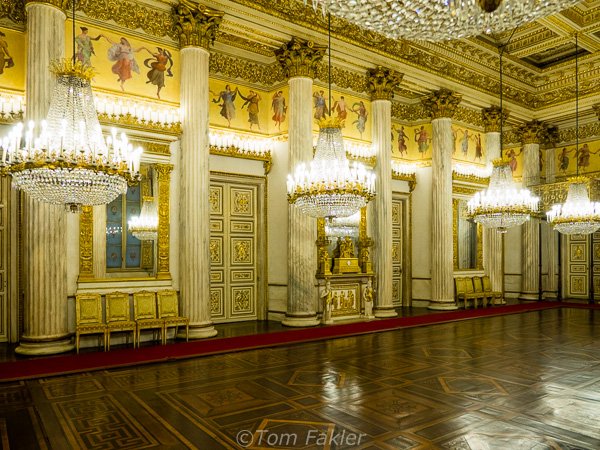 Staircase of the Scissors

The so-called “staircase of the scissors” was designed by Filippo Juvarra, with a “pincer” structure spreading the weight over the walls, and the upper central flight of steps appearing to be suspended in midair. White stucco decorations display flowers, shells and spiral motifs. 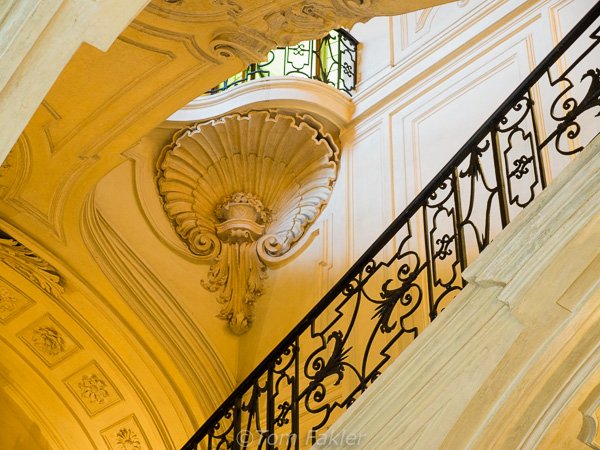 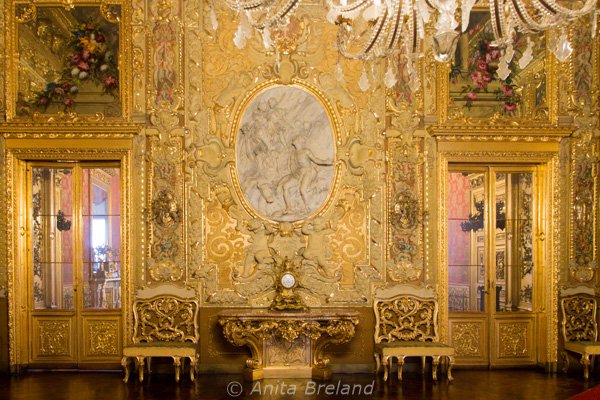 In the Daniel Gallery, the works of a leading court painter decorate the vault. Mirrors, sofas, stools and bronze appliqués were added two centuries later. Famous figures of the Savoy territories were given their due in the mid-19th century, in the form of portraits partially covering the mirrors. 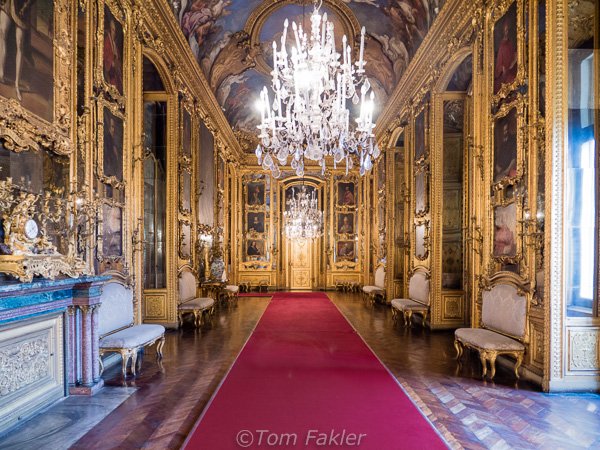 The dining room, previously a bedchamber and toilet cabinet, was created in 1837. Tapestries covering almost the entire walls depict episodes from the life of Hannibal and Julius Caesar. I tried, and failed, to imagine throwing a dinner party here! 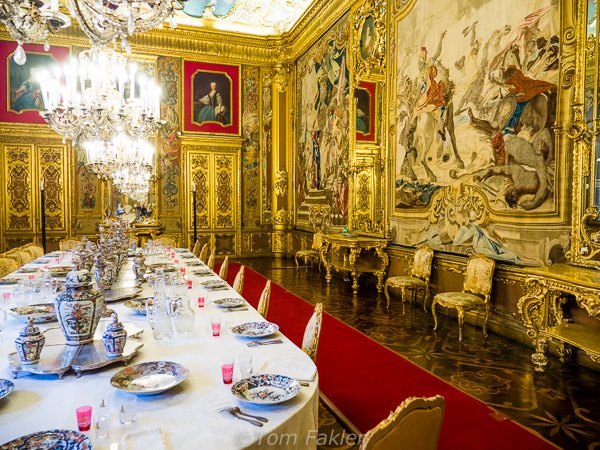 By the time the Merenda was over, lights had come on to illuminate the Palazzo Reale and the Piazza Castello, a pedestrian zone in the center of Turin. After taking in the baroque opulence of the palace, we enjoyed the contrast of contemporary art installations in neon, draped across nearby streets. 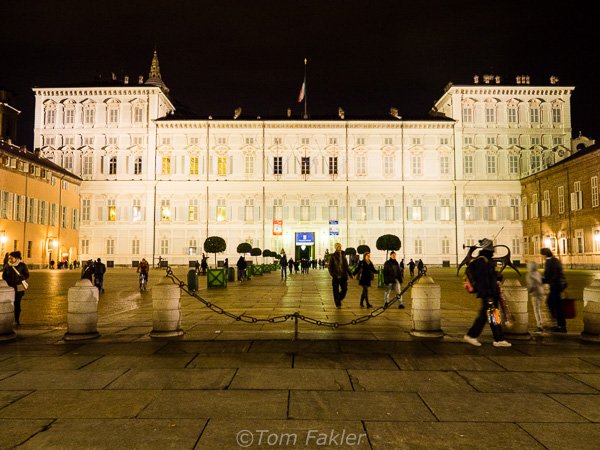 Visiting the Palazzo and Turin

Want to know more? Visit the Palazzo Reale di Torino website for a virtual tour, hours of opening, and directions for getting there.

Palazzo Reale is just one of many royal residences in Turin. With its arcaded streets, Turin is a wonderful city for walking in any season, and public transportation is excellent and easy to navigate.

Many thanks to Torino Turismo e Provincia, who hosted our stay in Turin. Enjoyment of an afternoon in the Palazzo Reale was all ours!