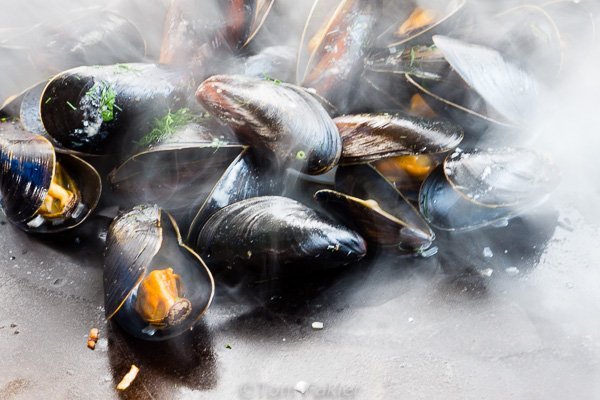 A redeeming feature of the gray month of November in northern Europe is the opportunity to enjoy moules frites. I love them steamed with white wine, onions or leeks, and herbs (the French fries are optional). In West Sweden, the season for harvesting mussels began in September and continues into the winter. Two months ago, I tasted them at their freshest–within one hour of harvest–on a mussel ‘expedition’ in Ljungskile.

Our afternoon began at the boat dock in Lyckorna, a summer recreation spot on the rocky coast bounding Havstens Fjord in West Sweden. The architectural style of the town’s original buildings was dictated by Robert McFie, a Scot who brought the sport of curling to Sweden. In 1877, he founded a recreational colony at Lyckorna. The watch tower is still a meeting point for boats and travelers.

Although we were prepared for stormy weather, the weather gods smiled and we were blessed with a breezy afternoon of fleeting sun and shadow. 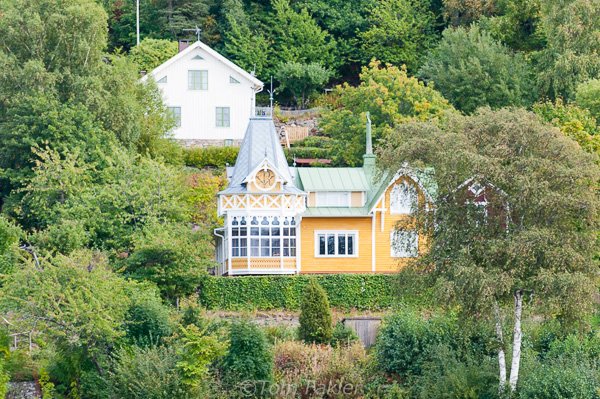 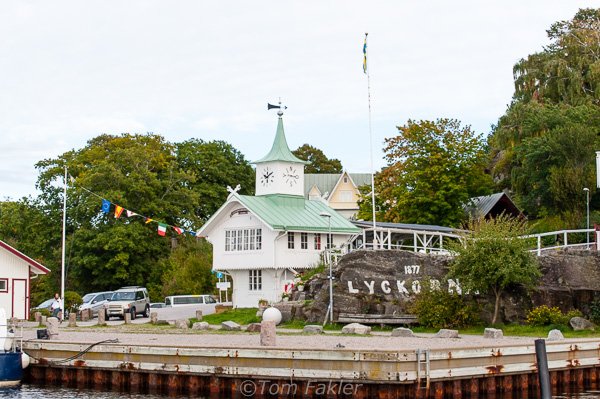 Our guide for the afternoon was Janne Erik Bark, skipper of the M/S Märta, which is used to maintain mussel farms, as well as transport tourists. Janne Erik is a passionate advocate of sustainable mussel farming, as a means of clearing the coastal waters of pollutants generated by inland cattle farming. 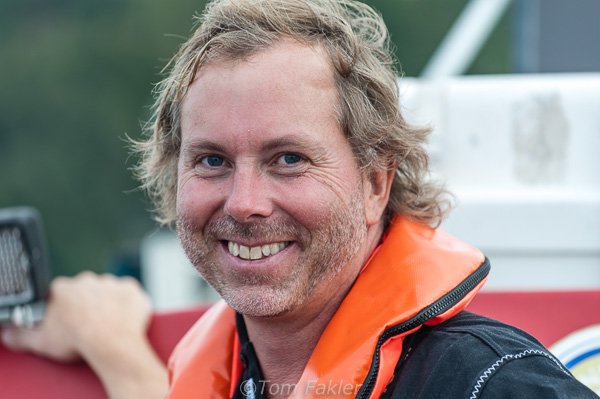 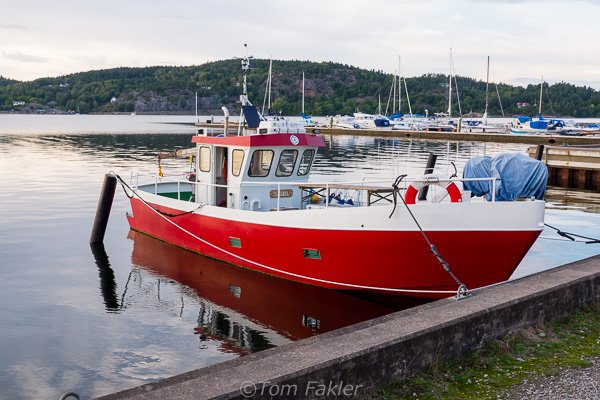 A lesson in sustainable farming

Mussels are filter feeders, eating plankton and other microscopic organisms. At the same time, the mussels generate seafood, fodder and agricultural fertilizer, thus recycling nutrients from sea to land. En route to the farm, Janne Erik explained how mussel farming is done in Havstens Fjord. 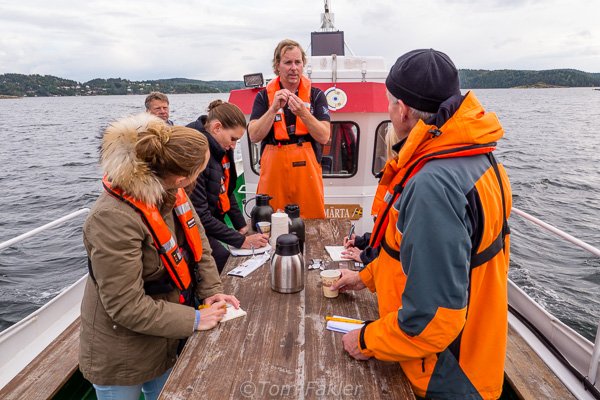 The farms are placed where natural drift occurs, their locations  adjusted from year to year. The mussels grow on in a grid of five rigs, each rig holding 25 kilometers of belting, suspended from buoys. The rigs are maintained every second week, to keep the farm tidy. 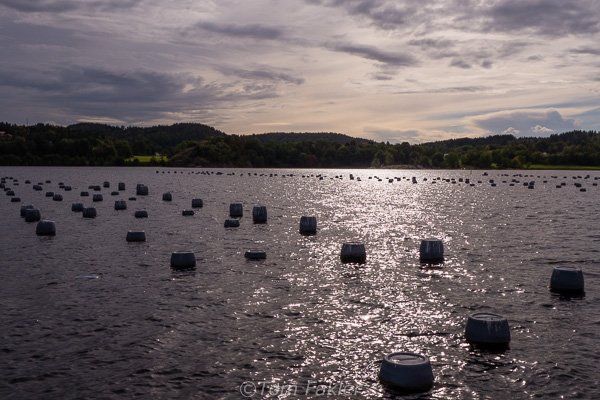 Each spring, mussels spawn when the water temperature reaches 10 degrees Celcius, releasing billions of microscopic larvae into the water. These larvae float until they attach themselves to collector lines positioned to catch them as they drift by. Prime mussels for eating are harvested after their shells have fully developed: according to Janne Erik, that means a wait of two years (and three summers) before they are brought from fjord waters to the dinner table.

Each mussel filters between five and ten liters of water per hour, obtaining food and energy from plankton. By consuming plankton, the mussels stop production of food for algae, which keeps the water clear. Every week, a sample of mussels is sent to a lab to be tested for bacteria and algae poisoning. 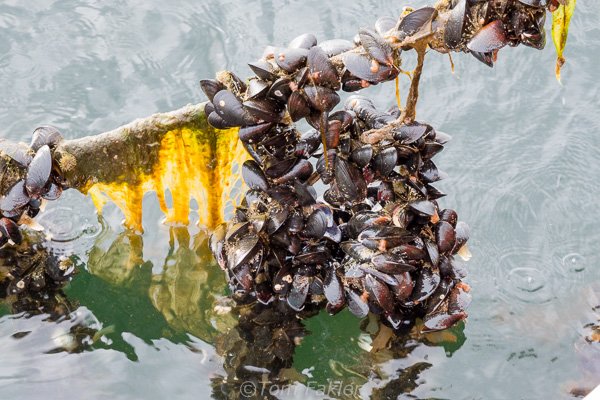 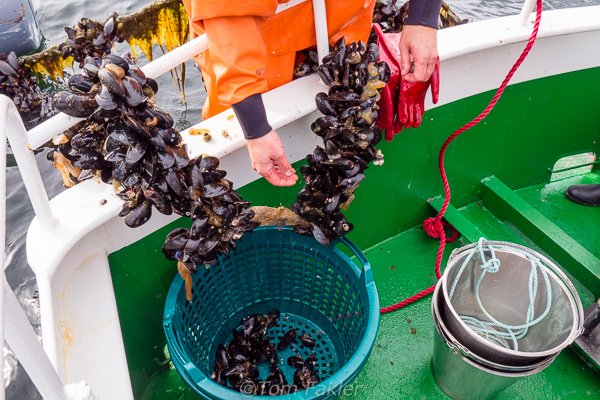 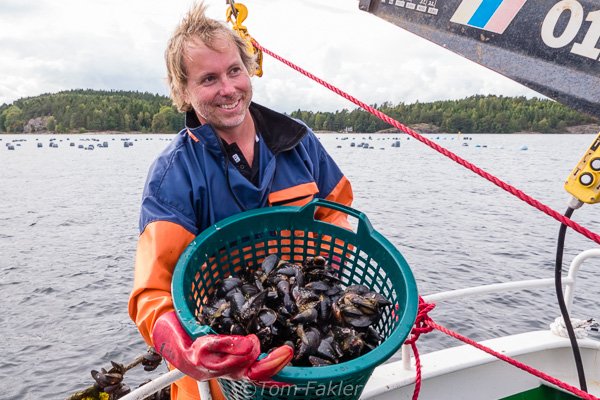 Shellfish as a team sport

After our skipper had used the M/S Märta’s crane and pulley to gather plenty of mussels for our meal, he put us to work. We were soon scrubbing the mussels we would eat within a half-hour of our return to shore. 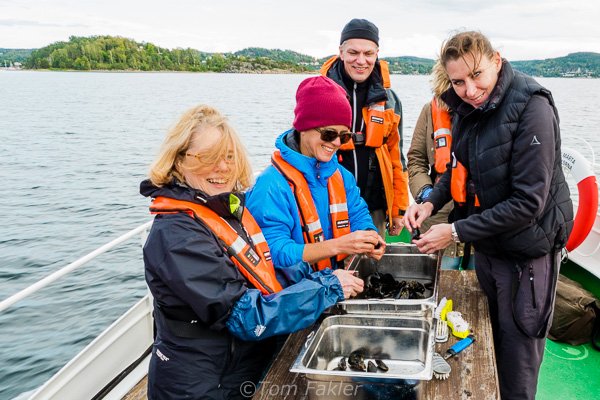 Chef Harald Laanemets of Villa Sjötorp in Lyckorna had come along on our expedition, and as soon as we arrived back at the dock, heated an enormous party-style grill, to cook the mussels outdoors. I was delighted when he prepared the mussels mariniere style, with onions, seawater and white wine–my favorite!

For our meal, we gathered around a big wooden table in the Lyckorna Watchtower, as the sun set behind the Bohuslän archipelago. The delicate ­­­­beauties were sweet and soft with the merest hint of ocean. 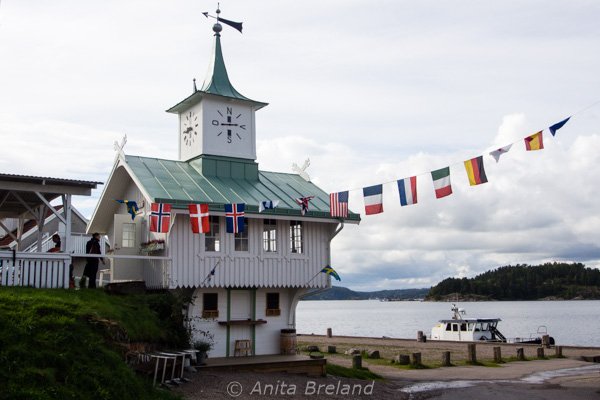 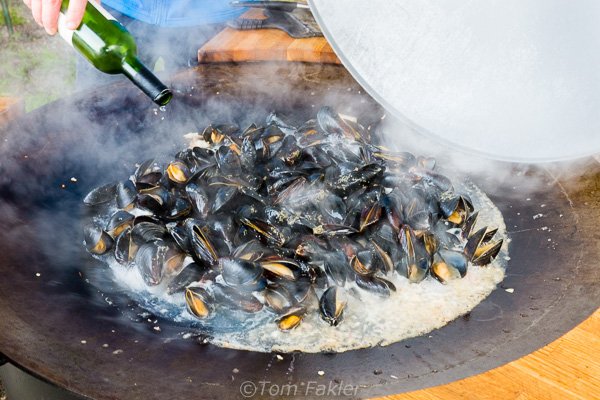 Our press trip was not the only event of the day for Janne Erik and his catering partner Gunilla. They also organize ‘mussels with friends’, invitational parties for up to 24 people. While Chef Laanemets prepared the mussels, Janne Erik and Gunilla chatted with us and finished setting the table for our meal. 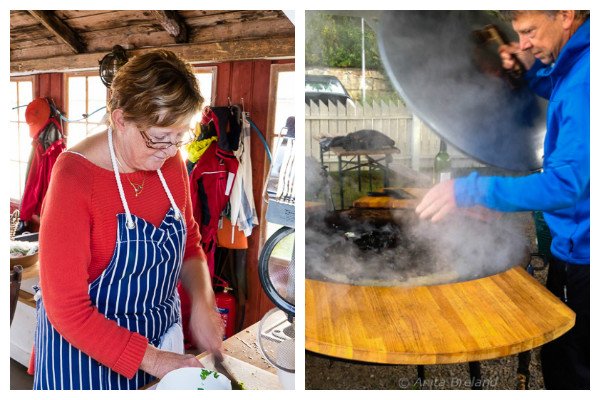 Soon candles were lit, and it was time to enjoy our ‘catch of the day’, served with traditional accompaniments:  freshly baked bread and a dollop of homemade aioli. We also had our choice of beer or German Riesling, the latter recommended by our hosts, as ideal for accompanying a plate of mussels. 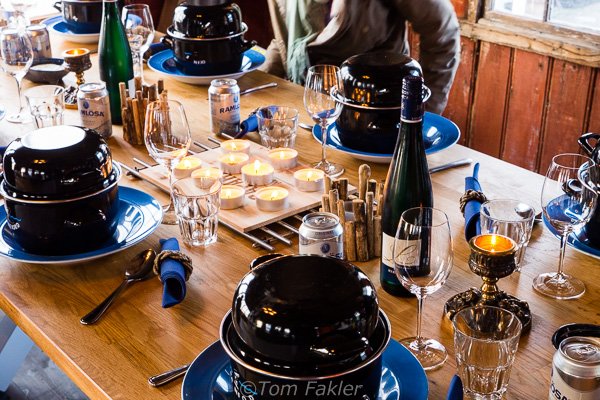 Beneath the pristine waters along the Bohuslän coast, with cold temperatures that guarantee slow growth, mussels grow to tender perfection. Swedes maintain that it’s the cold, clear, smooth waters of the fjord, that makes their mussels so good. After our shellfish journey on the M/S Märta, I am convinced! 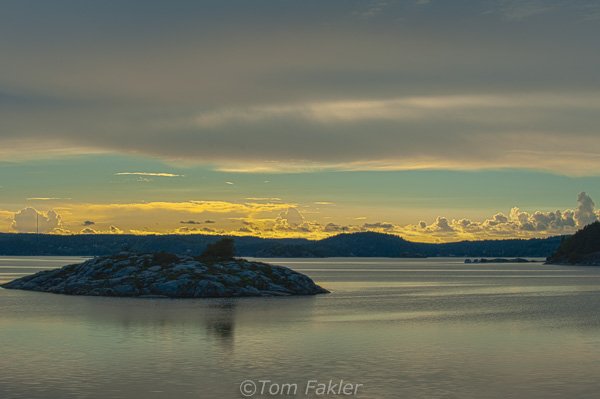 Travelers to West Sweden can choose from  a menu of shellfish journeys along the coast, from lobster and oyster expeditions, to the mussel expedition we experienced. Travel packages come with stays in atmospheric old-world hotels, such as ours at Villa Sjötorp in Lyckorna, Ljungskile. Its fine kitchen offers culinary specialties made primarily with locally produced ingredients, plus a bountiful breakfast by candlelight.

Our excursion to the mussel farms of Havsten Fjord and stay at Villa Sjötorp was sponsored by the West Sweden Tourist Board. Enjoyment of our afternoon on the water–and a fine pot of moules–was all mine.