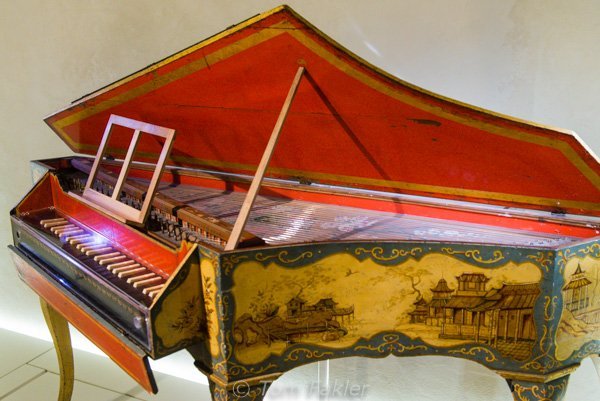 Love music? history? architecturally significant buildings? All this and more come with a visit to the superb San Colombano Museum in Bologna. Built around the Tagliavini Collection of Musical Instruments, and housed in a former church dating from the 7th century, this little treasure trove scores on all three counts.

When Tom and I had a chance to tour the museum with curator Liuwe Tamminga, protege of founder Luigi Ferdinando Tagliavini, we knew we were in for a treat. Our one-hour visit stretched to almost three, and we thrilled to see many of the instruments in action.

The Tagliavini Collection of Musical Instruments

The Tagliavini collection was assembled by Luigi Ferdinando Tagliavini, Bolognese musician and scholar, over several decades. It contains about 80 instruments, including harpisichords, spinets, pianos, clavichords and other instruments. 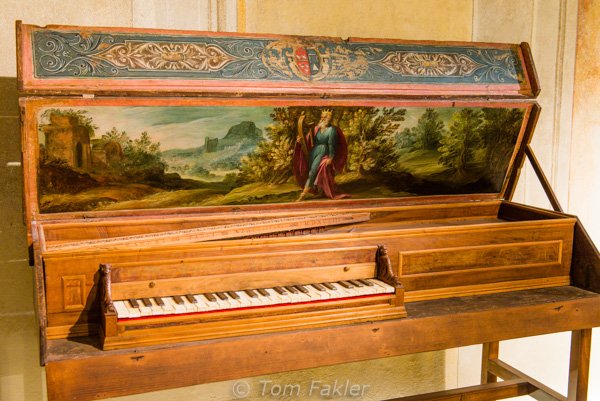 The instruments range from sixteenth-century memorabilia to folk instruments created in the twentieth-century based on age-old traditions. Many of them are embellished with paintings of landscapes and mythological scenes by renowned artists. There are instruments from all the major centers of Italian harpsichord production: Bologna, Naples, Venice, Rome and Florence.

Instruments from European capitals also show Italian influence: an Italian-style bentside spinet from Paris (1691) was made by a traveling builder, and decorated in the style of Versailles. There are square pianos built in London and Amsterdam in 1786, and from the 19th century, a half-sloping console piano from Paris and grand pianos from Vienna and Berlin. 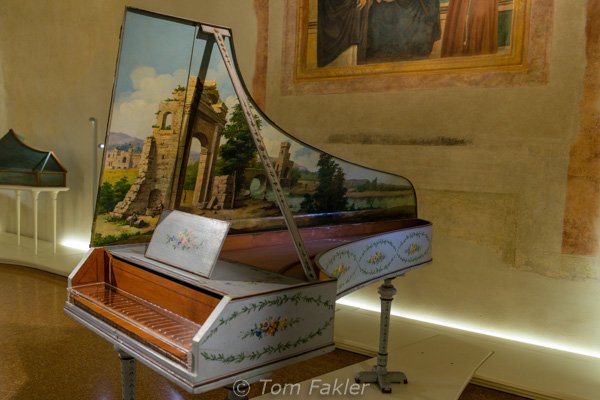 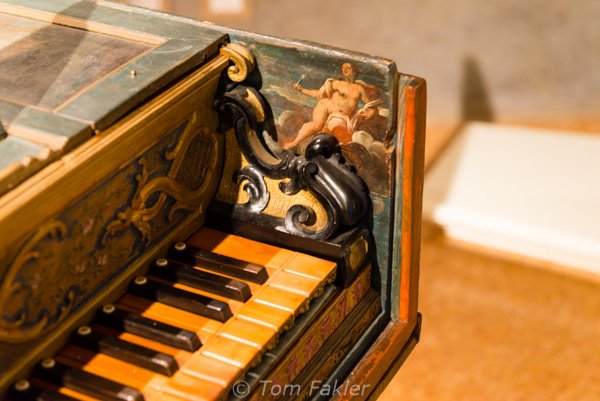 For a sampler of these instruments in action, take a look at this video (2:50).

The building: an atmospheric church

The former church has atmosphere aplenty: from the main floor with its high arched ceiling and cupolas, to a richly decorated private chapel, to the organ loft with its rope pull still connected to the building’s bell tower. There are wonderful frescoes, nicely restored; and the Oratory on an upper level which includes works by most of the leading 18th century Bolognese painters. This room alone is worth a visit to San Colombano. 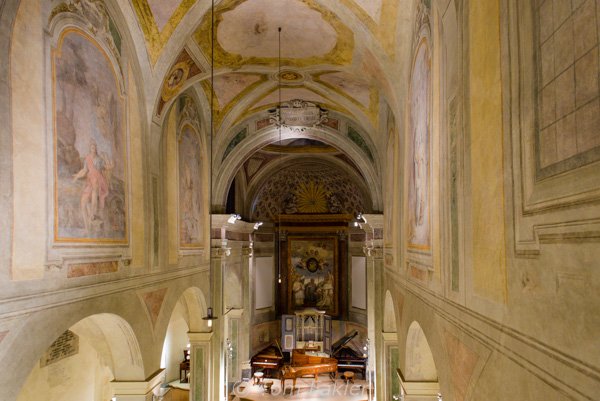 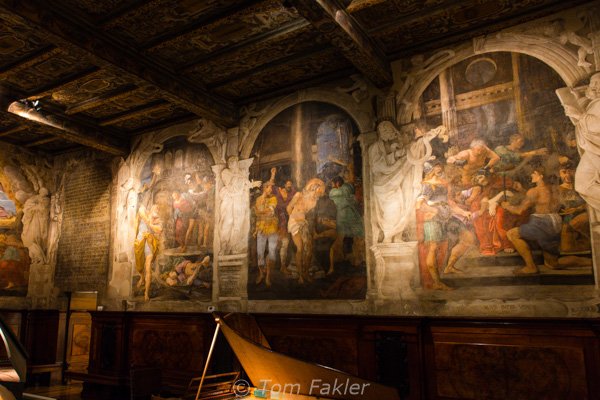 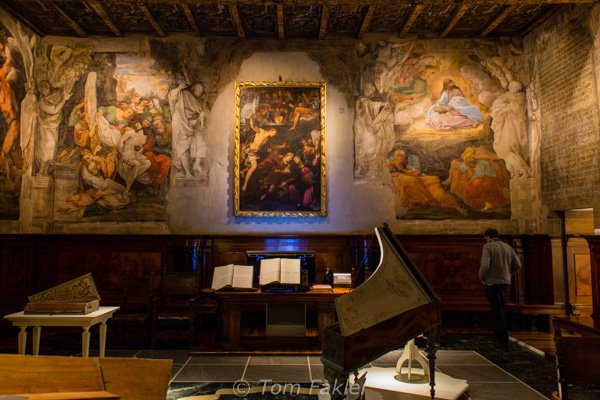 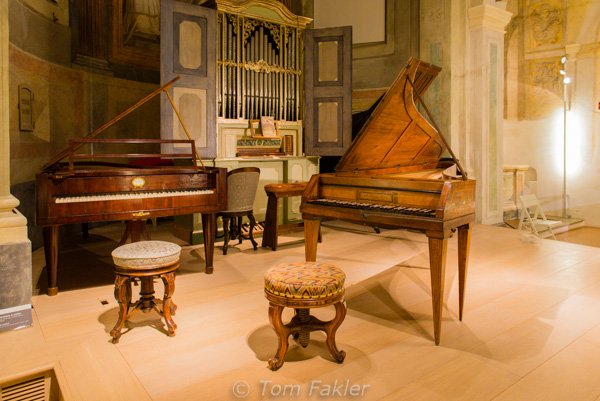 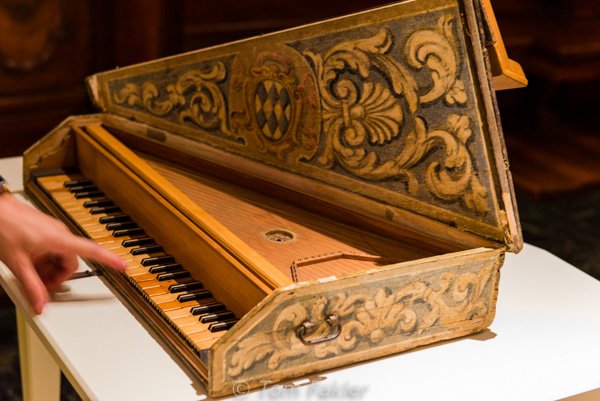 Whatever their theme, small museums and special collections that showcase the passion behind the works get my attention. Add in the enthusiasm and knowledge of a curator such as Liuwe Tamminga, and a visit morphs into something special indeed. 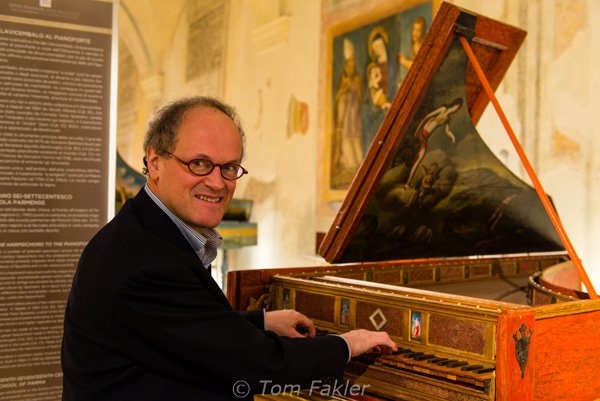 Originally from The Netherlands, Liuwe Tamminga is a celebrated organist, and has held concerts all over the world. An award-winning performer of Baroque and Renaissance music, he teaches master classes, and collaborates with leading directors and performers of early music . He is the organist of the at the Basilica of St Petronius in Bologna together with Luigi Ferdinando Tagliavini.

For an introduction to the beautiful music they make together at St. Petronius, watch this video, Tagliavini e Tamminga suonano gli organi di S. Petronio (5:54).

San Colombano is one of several museums under the Genus Bononaie umbrella. However, it is surely unique in that regularly scheduled concerts are played on the historically significant instruments in the collection. All of them are maintained in good working order.

Tinkling, clicking, clinking or thudding, with sounds high-pitched or bassoon-like, each instrument remains true to its epoch and style of music in vogue at the time it was built.

Thanks to Liuwe Tamminga for an extraordinary introduction to early music and our tour of the San Colombano, just one of Bologna’s Genus Bononnaie museums. Grazie mille! to Emilia Romagna Tourism for hosting our stay in Italy. Impressions and opinions, as ever, are my own.

Around Angkor Wat— without the crowds