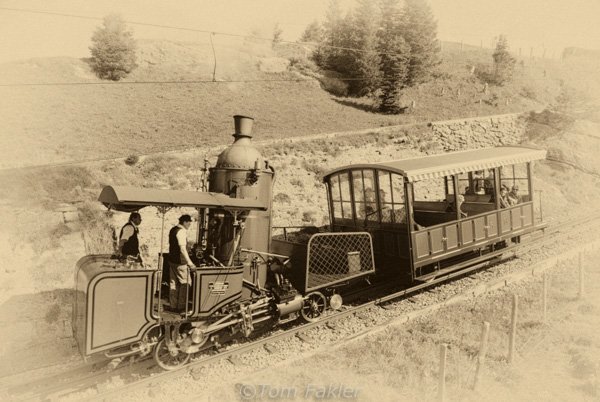 The Swiss have a love of trains–the trains are on time 99% of the time, and they are clean, well maintained and reasonably priced. I love them, too, because I can depend upon them, because they connect with other trains and buses with just minutes to wait. Most importantly they take me to the mountains.

More than 18,000 trains run every day in Switzerland. Of all of these, my favorites are the antique steam-powered cog railways. One of the best runs on the Rigi, the “Queen of the Mountains,” near Lake Lucerne. 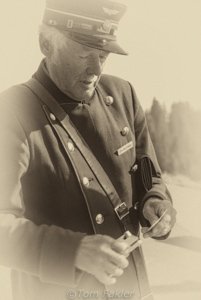 Two steam trains run regularly up to Rigi Kulm in the summer months: one from theArth-Goldau station and another from the ferry terminal at Vitznau. The two Rigi routes meet at Rigi Staffel, and run on parallel tracks to Rigi Kulm. The steam trains run on the same tracks as the electric-powered coaches that serve the Rigi all year long.

A ride up either route to the mountaintop end station provides a panoramic view of the surrounding area. Europe’s oldest mountain railway has been carrying passengers up from Vitznau to Mt. Rigi since 1873.

The Rigi Bahnen (Rigi Railways) has one of the world’s largest fleets of vintage rolling stock, and uses two styles of steam engines, dating from the 19th and early 20th century. Several of the steam locomotives were built in Winterthur in the early 1900s.

The oldest engine of the fleet–and my favorite–is number 7. It was built in 1871 and began running up the Rigi in 1873. This unique engine with its vertical boiler is the oldest surviving Swiss locomotive. It is also the only remaining standard gauge, rack-fitted, vertical boiler locomotive in the world.

When the Rigi’s system was electrified in 1937, number 7 was retired and placed in the Swiss Museum of Transport in Lucerne. In 2009, I was fortunate to photograph the engine in action, when it spent a summer carrying passengers on the Rigi, in celebration of the museum’s 50-year anniversary.

Engine number 7 may be back in the museum, but steam trains still run on the Rigi in July and August, according to a regular schedule. The summer season is past for this year.

However, one nostalgic ride remains on 13 September,  in the vintage “Belle Époque” saloon carriage. Passengers on this year’s final steam train run will enjoy a panoramic sunset, followed by dinner in the Restaurant Bahnhöfli at Staffel.

See you next summer on the Rigi!

Memories of spring in Switzerland