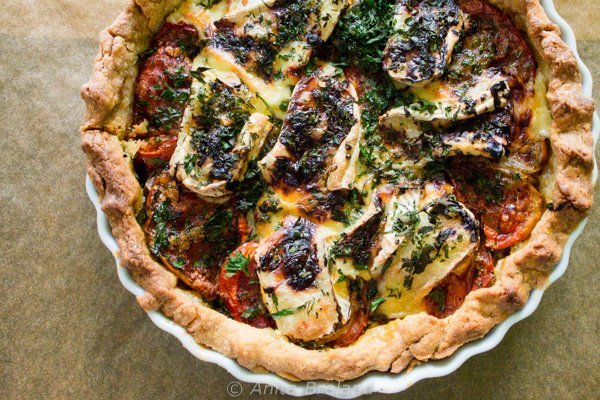 One rainy August Saturday that felt more autumn than summer, I hopped a train to Zürich-Oerlikon for a day of making pies in the color-splashed kitchen loft of Laughing Lemon. This was not the first time I’d made the trip over for a hands-on cooking session with Jack and Silvia McNulty, but it was one of the most satisfying.

Pies, nothing but pies The day was devoted entirely to making all sorts of pies, sweet and savory. The event harkened back to my childhood, and days spent “helping” my grandmother make her signature lemon meringue pie. There were no meringue pies in the loft kitchen, but through a day of aromatic chaos, we tackled several types of dough and fillings, and variations on both.

Flour was united with butter or olive oil to form a crumbly mass, massaged with a little water, rolled out on the counter and coaxed into pie plates and tart forms. Demonstrations, questions, banter, and looks of intense concentration came and went. Dough was folded, chilled, rolled, folded again.

We took turns rolling, pricking, cutting and tucking. In between all this, apples were sliced, and tomatoes, soft goat cheese and prepared vegetables found their way onto the waiting crusts. In all, we had EIGHT different pies to enjoy together or box for the trip home.

The chock-full schedule, Swiss Railway timing and sheer variety of the pies turned out of the loft kitchen made for a day of what Jack calls “cooking on the edge”.  Everyone came away inspired, and with ideas and the confidence to tackle at least some of the recipes in the course book.

First up was Jack’s Blitz Puff Pastry. This dough was a recurring actor in the day’s performance, returning to the stage three times after the first roll-out. In the end, many layers of flaky buttery bliss topped creamy, individual savory appetizers baked in small glasses.

Two tarts were made with olive oil instead of butter . Fully baked shells were filled with fresh ricotta, spring onions and herbs (for the vegetarian version) and the addition of finely diced chorizo (for the carnivores among us).

A basic French-style tart dough was the carrier for a tomato tart of extraordinary flavor.  This was our first item to sample, so the melding of honey and Dijon mustard, the melted consequence of fresh herbs over chunks of goat cheese and roasted tomato slices was especially rewarding.

Another French-style tart, this one blind-baked under the weight of beans,  was the basis for a savory quiche of braised sliced onions and chopped leeks. The result was an airy delight, the crust with just the right bite.

A French-style tart took on Gravenstein apples tossed with lemon juice, sweetened with powdered sugar, and baked under a top crust, for a double-crust apple pie.

Another dough in the French style, sweetened and with chocolate powder added, ended up as single-serve mini-tarts, completely cooked, then filled with a divine lemon curd, handily made in advance by Jack. I look forward to trying this for myself. It was the best lemon curd ever!

There was a tart tatin, using the Zwetschge (Damson plums) just coming into season, which gave us inspiration for something to do with the grand harvest of plums in northwest Switzerland this season!

Finally, two galettes, free-form pies made with a yeasted olive oil tart dough, joined the party. The rough and ready dough was less flakey–a bit “bready”–perfect for the rustic presentation with a surprise filling of pears, figs and walnuts.

Update 2019: Thanks to Jack and Silvia for great times in the Laughing Lemon kitchen. It was so much fun to cook with you, and to travel with you in Italy. Wishing you all the best with My Fresh Attitude, your exciting new venture !