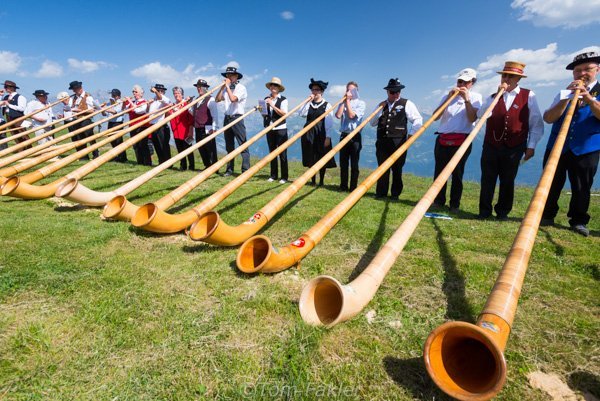 Several years ago, on a weekend excursion to the mountains near Lucerne, my husband and I met a troupe of alphorn players from Canton Argau. They had gathered in the countryside to practice for the upcoming International Alphorn Festival. They were in costume, treating the weekend as a dress rehearsal. As the only non-alphorn-affiliated guests in the small hotel, we were treated to several impromptu concerts. We were intrigued with the possibilities for alphorn overload that an international gathering of avid instrumentalists might offer.

Last weekend, Canton Valais hosted the 12th annual International Alphorn Festival. It was the perfect opportunity for another weekend getaway filled with alphorns, this time to the village of Nendaz, in the mountains above Sion. Nationalities represented in the alphorn competition included France, Austria, Italy, Germany and the USA, as well as Switzerland.

Alphorn players bring the same love of Swiss traditions as that associated with Switzerland’s famed cheese and watch makers. Of the estimated 4,000 alphorn players in Switzerland, about 150 are from the Valais, and ten of those hail from Nendaz. When July rolls around, they host more than 150 alphorn instrumentalists: some compete, but all come to the festival ready to share their love of the mountains.

Thanks to Nendaz Tourism for hosting our visit to the festival!

Discovering Nepalese cuisine, one plate at a time