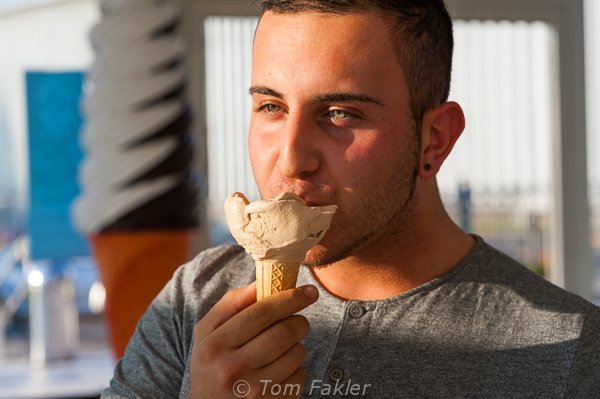 Smooth on the tongue, intense in flavor, gelato has been known to induce a state of rapture.

A sure sign of spring in Basel is the arrival of gelato vendors on street corners all over the center of town. This year, seeing them brings back memories of my visit to  Carpigiani Gelato University near Bologna, Italy last December. It was a highlight of my trip through Emilia Romagna.

Are gelato and ice cream the same (good) thing?

Ice cream is great stuff, don’t get me wrong. I spent the better part of my childhood doing the first, easy turns on the ice cream maker at family gatherings.  I chased the Good Humor truck down the block in my suburban neighborhood. I came of age with Ben & Jerry’s, but in central Texas, Bluebell was the brand leader. It still is, and I miss not having a Bluebell outlet near my home in Switzerland.  However, gelato has offered a great, easy-to-obtain, and sublimely delicious, alternative.

The folks at Carpigiani U were at great pains to tell us what makes gelato, well, NOT ice cream.  In brief, in case you are taking notes, Italian gelato:

Mark Falkowitz of Serious Eats has  written about gelato, saying the “flavors come through direct, hard, and fast, then melt away clean”. Differences of airiness, fat content and serving temperature acknowledged, he maintains that, at the end of the day, gelato is the Italian word for ice cream.

Gelato gets its own museum

Over the last decade, Carpigiani has trained several hundred artisans to produce classic preparations, and along the way, bring new generations, even whole continents, of gelato lovers on board. Last October, the Carpigiani Gelato Museum opened its doors.

Gelato World Tour: coming soon to a continent near you

It was in Bologna that I first learned of the impending Gelato World Tour, to be staged at eight locations on four continents. On May 3-5, Rome will become the world capital of artisan gelato, followed by Valencia, Chicago, Dubai, Shanghai, Sao Paulo, Sydney and Berlin. The finals will be held in Rimini, Italy in September 2014, where the global winners chosen by the public and experts will compete for the title of World’s Best Gelato Artisan.

Tomorrow at Rome’s Pincian Terrace, sixteen Italian gelato professionals will compete to prepare the perfect cup, and public voting will be added to the consideration of a professional jury. There will be children’s activities, seminars and of course, lots of tasting. The winners will represent Italy at the Grand Finale in Rimini.

Flavors to be judged this weekend include standards such as pistachio and chocolate, as well as the more exotic:  truffle, bread and jam, apple cake, Grand Marnier cream and orange marmalade, and figs in chocolate.

Will you be in Rome for Stage 1? I’d love to know what “grumpy heart” or Zammù gelato is like!

He won for”Cuor di Brontolo” (“grumpy-hearted”, a pistachio cream with an intense flavor) and will go to the Rimini finals next year.

Will I see you there?

Shopping in the last week of Ramadan