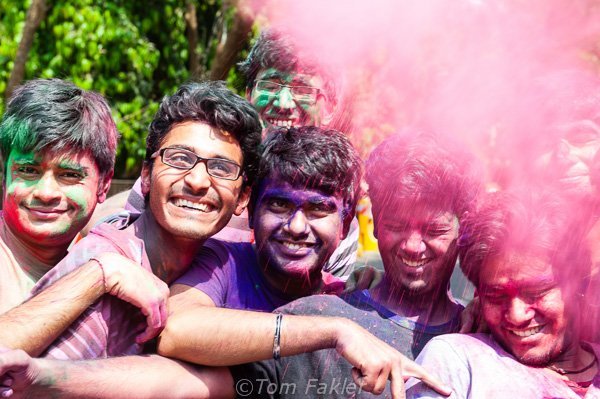 Every year, thousands of Hindus participate in Holi, the festival of colors.  Tom and I arrived in Mumbai on the eve of Holi, and were able to observe a bit of the revelry, as practiced in Maharashtra’s capital city.

We were in India for a week-long train journey on the Deccan Odyssey, and our trip happily coincided with Holi. Traveling south along the Konkan coast to Goa, we learned more about the celebration of this ancient cultural tradition. Swinging northward away from the coast to Kohlapur, we had an opportunity to see this colorful festival come full circle.

A religious festival, rooted in legend

Originally, Holi commemorated good harvests and fertile land, with celebrants building a bonfire and offering their first crop of golden wheat to the fire god Agni. The coming of spring signifies friendship, brotherhood, reunion and sense of revelry.

To Hindus, Holi celebrates the victory of good over evil, with mythology recounting the destruction by fire of the demoness Holika. The day before Holi is known as Holika Dahan, which means ‘burning of Holika’. In the runup to the festival, youngsters go around the community, collecting firewood and money. On Holika Dahan, the firewood is arranged in a pile in a clearing, and in the evening, a fire is lit. Households make offerings of a meal and dessert to Agni, the fire god.

In Maharashtra state, Holi is also called Rangapanchami, a time when people should forget about their rivalries and start new healthy relations with all. The story goes that a five-year-old named Jijabhai splashed gulal (color) on a young girl, Shahaji. Jijabai later married Shahaji and the couple had a son, the visionary king Shivaji, founder of the Maratha dynasty. Rangapanchami, marks the end of color play and occurs on the fifth day of the full moon.

The timing of Holi follows the Hindu lunar calendar, occurring on the day after the full moon (in early March according to the Gregorian calendar). In Mumbai, colors are thrown in the morning. Color play in rural Maharashtra traditionally takes place on the day of Rangapanchami, turning Holi into a week-long event.

Only the main day of the festival is known as Holi, sometimes called Dhulheti. These are the observances we see on television, with participants throwing and smearing brightly-colored powder on one another, especially on family members and friends. Celebrants also traditionally douse each other with tinted water.

Although it was not evident to us, Holi was considerably toned down in Maharashtra this year.  Water shortages in western India put a damper on the celebration, with state and municipal governments in drought-stricken areas asking the public not to use water at all. This meant foregoing “rain dances” and the throwing of buckets of water, water-filled balloons and paint.

Across Maharashtra, where Holi festivities last the longest, the situation is especially dire. After two consecutive years of diminished monsoon rains, many villages have little water for drinking and farming. According to news reports, more than 7,000 villages now rely on daily deliveries of drinking water to survive.

With Maharashtra reeling under a severe water shortage, appeals went out from the government for “dry” Holi celebrations.  Celebrities tweeted pleas to “Save water! Play a dry Holi!” and noted that the “need of the hour is to save water!” At least in Bandra, home to many Bollywood notables, Holi was celebrated with flowers, in lieu of the traditional colors and water.

Discovering the fabric arts of Gujarat